← Hold fire! The story behind the cannon bollard on Bankside
Immerse yourself in a colourful wonderland as Colourscape returns to Wembley →

The history of the colourful pillbox memorial on a Stockwell traffic island.

Around the country, many a traffic island is home to a war memorial. However, one particular south London island has a rather more colourful tribute to the war dead in an unusual format. In fact, this memorial started life as an important space to shelter Londoners from the Nazi bombs during World War II.

At the junction of Clapham Road and South Lambeth Road, just moments from Stockwell tube station, is the Stockwell War Memorial. The memorial is in two parts – the oldest of the two is dedicated to the fallen of World War I, while the more recent one was built during the World War II. 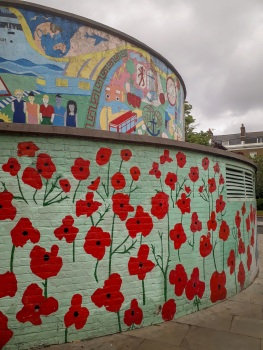 In the early part of the Second World War, some civilians and government officials were concerned the available shelters weren’t quite robust enough to withstand the bombing. Time was of the essence so a plan to build deep-level shelters underneath existing tube stations was deemed the speediest and most cost-effective option. Originally 10 shelters were planned, but in the end only eight were constructed. Building began in 1941, and by 1942 they were complete. The shelters were mostly located by Northern line stations, including Stockwell, Clapham North, Clapham Common, Camden Town, Belsize Park, Goodge Street and Clapham South, with another near the Central line station Chancery Lane.

The Stockwell deep-level shelter is located below Stockwell station and features two parallel tunnels, measuring 16ft in diameter and split horizontally with upper and lower levels. The shelters were accessed by two, pillbox-shaped entrance shafts – one being the war memorial on Stockwell’s traffic island, and the other on Studley Road. The tunnels would have fit hundreds of beds to accommodate Londoners overnight, while there were further spaces for toilets, medical assistance and ventilation. The Stockwell shelter was completed in September 1942, but was initially used by the government until it opened to the public in 1944. With the war finishing a year later, it fortunately didn’t get much use. After V-day, the Stockwell shelter was briefly used to house military personnel.

For decades, the shelter remained an ugly eyesore on the South Lambeth Road. However, Brian Barnes and Myra Harris turned it into a war memorial in 1999. Brainstorming with schoolchildren at nearby Stockwell Park School, the images were inspired by local history. Among the famous faces pictured include actor Sir Roger Moore – who grew up in Stockwell – and artist Vincent Van Gogh, who briefly lived in nearby Hackford Road during 1873-74. It also depicts the MV Empire Windrush ship, which brought Caribbean emigrants to Britain, with many settling in Brixton and the surrounding areas. Some new arrivals ending up sleeping in a makeshift hostel in the Clapham South deep-level shelter until they found more long-term accommodation.

The mural was expanded in June 2001 with the addition of war hero and special agent Violette Szabo (1921-1945), who spent her teen years living in Stockwell. The top of the mural features a quote from Robert Laurence Binyon’s (1869-1943) poem ‘For the Fallen’, originally published in September 1914.

The one tube you CAN drink on! Head underground for post-war frolics at Cahoots

← Hold fire! The story behind the cannon bollard on Bankside
Immerse yourself in a colourful wonderland as Colourscape returns to Wembley →
%d bloggers like this: