The history of the London home of artist Augustus Charles Pugin and his architect son Augustus Welby Northmore Pugin. 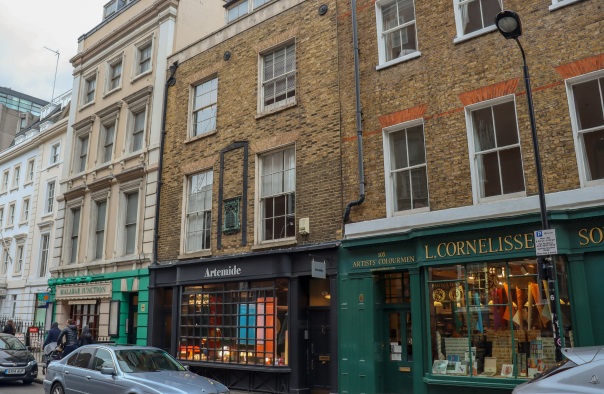 The name Pugin will be familiar to many as it comprised a dynasty of talented artists and architects. The family name has been immortalised as the creators of many great buildings in the UK, mostly notably the Elizabeth Tower at the Palace of Westminster (aka Big Ben). While the architects of the family designed many grand structures, their own abodes were rather modest in comparison. One of the Pugin family’s only surviving London homes stands on Great Russell Street on the Bloomsbury/Fitzrovia boundaries.

Great Russell Street was first established around 1670 and followed an old path named Green Lane. The road took its name from the local landowners, the Russell Family and Dukes of Bedford. John Strype’s (1643-1737) ‘Survey of the Cities of London and Westminster’ in 1720 described Great Russell Street as “a very handsome large and well built street, graced with the best buildings, and the best inhabited by the nobility and gentry, especially the north side, as having gardens behind the houses: and the prospect of the pleasant fields up to Hampstead and Highgate. In so much that this place by physicians is esteemed the most healthful of any in London.” One such early resident was the celebrated architect Sir Christopher Wren (1632-1723), followed by Regency architect John Nash (1752-1835), who designed a row of white stuccoed, terraced houses on the street in 1777-8 and lived at No.66. By the 19th century, the road’s fortunes were somewhat mixed. Although the north side has remained relatively well to do, the south side had become more downmarket and commercial, with the Meux brewery premises nearby.

When it was first built in the late 17th century, 106 Great Russell Street was numbered 105. The three-storey terrace is made of yellow brick, with an attic featuring dormer windows. Today, the ground floor features an early 19th century shopfront with a projecting window, that is currently a showroom for the Italian lighting company Artemide. There are two doors on the ground floor – one on the left providing entrance to the shop and the other providing access to the floors above (what would have been the home of the Pugins).

French artist and writer Augustus Charles Pugin (1762–1832) arrived in Britain in 1798 after leaving France during the revolution and enrolled at the Royal Academy school in London. He soon found work as an architectural draughtsman for John Nash, sketching his buildings such as Carlton House Terrace and the Royal Pavilion in Brighton. In 1802, Pugin Snr married Catherine Welby (1769-1833), of the wealthy Lincolnshire Welby family. By 1809, the couple were living at 39 Keppel Street (now Store Street) in Bloomsbury, where Pugin Snr also had an office. Their only son Augustus Welby Northmore Pugin (1812–1852) was born at the home in 1812.

The Pugin family resided at the Georgian terrace for 10 years

The Pugin family moved to 105 Great Russell Street in early 1823 when the young Augustus was 11 years old. The head of the house immediately took out a business insurance policy on the property with the Royal & Sun Alliance Group. Augustus Snr began taking in pupils to study drawing and board there, which provided good company for his only child. Although younger than the pupils, it is likely Augustus Jnr’s talent for design would have been encouraged. From an early age, Augustus Jnr’s skills were evident and he assisted his father in his books on Gothic architecture as a teenager. Meanwhile, his father took out more insurance on the property to cover “copper plates belonging to the work of the Architectural Antiquities of Normandy” in 1828.

Starting out his adult life, Augustus Jnr started working as a stage carpenter and scene painter in local theatres, before moving on to designing sets and costumes. His parents were incredibly supportive of his burgeoning stage career and spent a considerable sum converting their attic into a model theatre so Augustus Jnr could experiment with theatre effects. The attic’s ceiling was removed, the roof cutaway and cisterns added. In 1831, he was commissioned to design the sets of the new production of the Walter Scott opera ‘Kenilworth’ at the Royal Opera House. The same year, the 19-year-old married Sarah Anne Garnet (1814-1832), despite his parents’ disapproval. Despite this awkward situation, the young newlyweds lived together with his parents in Great Russell Street.

In May 1832, the first of a series of tragic events took place. Sarah Anne died in childbirth while giving birth to their daughter Anne. Seven months later, Augustus Snr died at Great Russell Street following a long illness. His widow Catherine passed away five months later in April 1833. Both Pugins were buried at the Welby family vault at St Mary’s Church in Islington. As a widower and single father to baby Anne, Augustus Jnr threw himself into his new career of architecture. He wasn’t single for long as he soon married his second wife Louisa Button (1813-1844). It was time for a fresh start after the sadness of the past two years so Augustus Jnr quit the house in Great Russell Street permanently, with it moving on to Scottish architect Thomas Larkins Walker (1811-1860), a former pupil of his father and the executor of his will. With his new wife and baby daughter, Augustus Jnr moved to Ramsgate, Kent, to be near his maternal aunt Selina Welby.

Pugin went on to become a prominent 19th century architect, famous for pioneering Gothic Revival architecture. His design for the Elizabeth Tower at the new Palace of Westminster was his last design before his mental state deteriorated. He also designed much of the interior of the magnificent Houses of Parliament. Other noted Pugin buildings include Alton Castle in Shropshire, St George’s Cathedral in Southwark, Nottingham Cathedral, as well as many other churches and buildings across England, Ireland and Australia.

Decades after Augustus Jnr moved out of Great Russell Street, he and his father were commemorated with an ornate plaque. The Bedford Estate surveyor Charles Fitzroy Doll (1850-1929) designed a bronze plaque from a model by C Langlois, erected on the first floor façade in 1908. It features two cherubs holding a wreath and reads: “Here lived the architect Augustus Charles Pugin | Born 1762. Died 1832. Augustus Welby N Pugin | Born 1812. Died 1852.” The house was Grade II listed by Historic England in 1969.

A plaque marks the presence of the Pugin family