Cattle used to graze in these central London parks in the 18th and 19th century.

Today, the neighbouring St James’s and Green Park are small pockets of green in the centre of bustling Westminster. Dwarfed in comparison to other royal parks, the pair are a popular cut-through for tourists going between Trafalgar Square and Buckingham Palace. Standing in either park in the 21st century, you would be hard pressed to imagine of them covered in grazing cows. However, as little as 115 years ago, cows in the park were used to provide fresh milk for Londoners.

St James’s Park is the oldest of the two and was the first royal park in London. Originally set out as a deer park by King Henry VIII (1491-1547) in 1532, it was later landscaped by King James I of England (1566-1625). Meanwhile, Green Park originally started life as Upper St James’s Park when the land was surrendered to King Charles II (1630-1685) in 1668, who was also restoring nearby St James’s Palace. By 1746, the park was renamed The Green Park. Queen’s Walk, a pathway along the eastern fringes of the park (leading from Piccadilly to The Mall), was laid out by King George II (1683-1760) for his wife, Caroline of Ansbach (1683-1737). Walking down Queen’s Walk, you may notice a small alley off to the east, in between Lancaster House and Stornoway House. Named Milkmaids’ Passage and leading to the Stable Yard of St James’s Palace, the small lane gives a clue to the park’s former life.

Up until the Georgian housing boom, the western fringes of the capital were incredibly rural, covered in fields and dotted with farms. As the London population grew throughout the 17th, 18th and 19th century, so did the number of dairies in the city. In an era before mass transport could bring in milk from the countryside, cows were required to live in and by the city so Londoners could access the calcium-rich drink. Two of these nearby rural-esque areas were St James’s and Green Park, which had grazing cows, accompanied by milkmaids to milk them. As early as 1710, buying milk from the cows at the ‘Lactarian’ in St James’s Park was documented by German traveller Zacharias Conrad von Uffenbach (1683-1734). The main area for buying milk was the Whitehall end of St James’s Park. Milkmaids paid half a crown a week for the right to feed and milk the cattle, rising to three shilling a week in 1772. Generally, the milkmaids tended to be servants of cow-keepers and were given permission to trade in the park by the Home Secretary. The cows would be driven twice a day – at noon and in the evening – towards the Whitehall corner of St James’s, where they would tied up and milked for a penny for a mug. Many of the customers were parents or nannies, buying milk for babies and children, as well as the sick, who had been recommended to get a calcium boost (see this 1790 print of a milkmaid in the park from the V&A collection). Some adults ordered a ‘Syllabub’, milk mixed with wine, sugar and spice. By 1794, the Board of Agriculture estimated there were 8,500 cows being milked in London. This 1801 painting by American artist Benjamin West (1738-1820) gives an idyllic depiction of milkmaid life in St James’s Park.

Between the 17th and 19th century, a host of new roads and large houses were built in the district of St James, which is now a conservation area. Lancaster House (previously known as York House and Stafford House) was completed in 1840, with its neighbour Bridgewater House (now known as Stornoway) following in 1872. With a Portland stone wall separating it from Lancaster House and old paving stones, Milkmaids’ Passage likely dates back to the 18th or 19th century. While not dated exactly, it is recognised as one of the surviving alleys or lanes which are “an integral part of the historic fabric of the area” by Westminster Council. The passage would have provided the perfect access for maids to carry fresh milk from the park’s cows to the dairy of St James’s Palace and the other aristocratic homes of the district.

While milkmaids and cows all seem quite quaint to our 21st century selves, the truth was St James’s and Green Park were pretty dangerous places to be, especially at night. The parks provided the perfect cover for escaping robbers and highwaymen fleeing the wealthy districts of St James and Mayfair after committing their crimes. In 1797, John Briant was sentenced to death after being found guilty at the Old Bailey of abducting and raping a 14-year-old milkmaid named Jane Bell from Green Park.

By the 1830s, there were 12,000 cows being milked in London, rising to 20,000 in 1850. American writer James Fenimore Cooper (1789-1851) describes Green Park as “nothing but a large field, cropped down like velvet, irregularly dotted with trees… Paths wind naturally across it, cows graze before the eye, and nursery maids and children sprinkle its uneven surface”, in his 1837 publication, ‘England, with Sketches of Society in the Metropolis’. A couple of decades later, journalist Henry Mayhew (1812-1887) describes the milk set-up in St James’s Park in his 1861 series ‘London Labour and the London Poor’. He wrote: “There are eight stands in the summer, and as many cows, but in the winter there are only four cows. The milk-vendors sell upon an average, in the summer, from 18 to 20 quarts per day; in the winter, not more than a third of that quantity.” Mayhew suggested the city’s cows’ milk was not as good quality as it would be in the countryside, and noted milkmaids struggled to sell any milk at all on a rainy day.

While demand for milk was generally high, the cattle industry took several beatings by disease during the 19th century, as detailed in Hannah Velten‘s 2013 book ‘Beastly London: A History of Animals in the City’. Pneumonia was imported from Dutch cattle in 1842, followed by a foot and mouth outbreak the same decade, and cattle plaques from Russia in 1865 and 1866-7, all which had devastating results on the city’s cattle population.

By the Victorian era, the royal parks’ cow stalls had expanded to selling gingerbread and other sweet treats. Charles Dickens Jr. (1837-1896) wrote in his 1879 ‘Dictionary of London: “There is a large consumption of curds and whey, and of milk fresh from the cow, at these primitive restaurants, and the cows which are tethered to the stalls give an air of reality to the promises of their proprietors.” 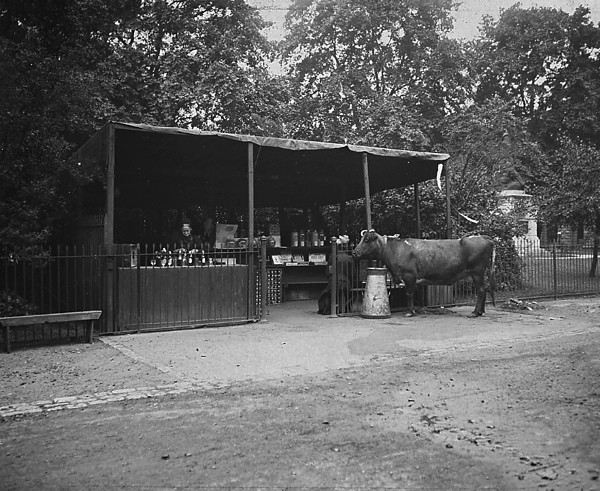 One of the parks’ most famous milkmaids was Mrs Emma Elizabeth Kitchen (1835-1915), mother of Victorian Music Hall performer Fred Kitchen (1872-1951). Mrs Kitchen had a kiosk on The Mall side of St James’s Park. The Kitchen family claimed their milk business had been in the family for generations and had been passed down mother to daughter since the time of James I. Fred’s memoirs ‘Meredith, We’re In!‘, published in 2013, details the family legend. King James was said to have discovered one of Mrs Kitchen’s milkmaid ancestors milking her cows in his royal park and asked her for a cup, to which she obliged, back in 1623. The monarch then promised the milkmaid that she and her heirs would always have the right to sell milk on the site. In his memoirs, Fred recalls driving the cows to and from the park and delivering milk to the wealthy tenants of nearby Carlton House Terrace as a young boy. Mrs Kitchen wrote to King Edward VII (1841-1910) in 1905 after finding out construction of The Mall would require her kiosk to be demolished. The monarch gave permission for her stall to be re-sited in Horse Guards, although cows were no longer allowed in the park. When Mrs Kitchen died in 1915, her kiosk was inherited by her sister Caroline Orford. Although the cattle were gone, the family business still sold milk, as well as soft drinks and buns, at ‘The Tin Cow’. However, in 1922, Orford’s campaign to save the stall failed as the site was needed for the new Guards Memorial. Orford’s departure from the park meant the royal parks’ milk association had finished forever. These days, the only milk you’re likely to find in the parks is a splash to accompany your tea in the St James’s Park café.

Discover the history of Chelsea’s dairies, and clues left behind.

Posted on 2 May 2020, in History, London, Tourist Attractions and tagged King James I of England, St James, Westminster. Bookmark the permalink. 5 Comments.

← Explore London’s art exhibitions and museums online during the lockdown
Ultimate London quiz Part 1 | Test your knowledge of the Big Smoke with 20 questions and answers →
%d bloggers like this: