← Lawyers, lakes and lost villas: The story of Richard Shawe and Casino House of Dulwich
A relic of Lambeth industry | The former Royal Doulton building →

The history of a Georgian office block in the City of London.

Atlas House in 1871, before the Cheapside entrance became a portico
© Coast Review on Wikimedia Commons

Standing on the corner of Cheapside and King Street in the City of London is a grand piece of Italianate architecture. While much of the road has been significantly altered over the decades with new architecture and changing traffic layouts, this Georgian office block has remained fairly close to its original design.

For over 130 years, Atlas House was the headquarters of the Atlas Assurance Company. The fire and life insurance company was originally founded by a group of merchants and bankers in 1807 at Will’s Coffee House – a popular meeting place for London movers and shakers. Their first office was at Bush Lane (near Cannon Street station), then Coleman Street (near Guildhall), before acquiring the site on the corner of Cheapside and King Street in the mid 1830s. At the time, Cheapside was one of the city’s most busiest roads and renowned for being a hub of business and trade. By choosing it as the location for their head office, it would give the business prestige and good exposure to potential customers.

The Atlas Assurance Company directors enlisted one of the country’s top architects, Thomas Hopper (1776-1856) to design their new headquarters. Kent-born Hopper was popular with King George IV (1762-1830) and had worked on the royal residence, Carlton House. Throughout his career, Hopper was mainly focused on country houses, including Penrhyn Castle and Margam Castle in Wales, Alscot Park in Warwickshire, and Gosford Castle in Co. Armagh, Northern Ireland.

Hopper’s 1836 design took inspiration from classical Italian architecture. The ground floor is made of Cornish grey granite, while the upper storeys are Portland stone. The upper storeys’ windows feature alternate curved and triangular pediments, with single, Corinthian palisters between. The top of the building was framed with a balustrade. Business was so going so well for the company, the directors splashed out on the new technology of internal gas lighting. They also didn’t seem concerned about paying window tax as the building has many windows.

In 1857, the building was extended northward, and again in 1893-94. Celebrated English architect Alfred Waterhouse (1830-1905) designed the late 19th century alterations, including a grand entrance at 1 King Street, topped by a sculpture of Atlas. The piece was carved from Portland Stone by Thomas Tyrrell for Farmer & Brindley. 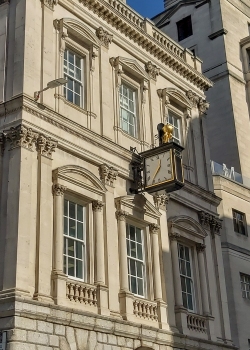 Throughout the turn of the century and beyond, Atlas Assurance Company continued to be successful and had branches around the world, including Washington D.C., Berlin, Buenos Aires and Manila. However, in 1941, the building was damaged by a World War II bomb (see a London Metropolitan Archives photograph of the aftermath). In the early ’50s, Waterhouse & Ripley were commissioned to restore Atlas House for a budget of £100,000. The practice was run by Cedric Gurney Ripley (1892-1963) and Michael Theodore Waterhouse (1888-1968) – grandson of the aforementioned Alfred Waterhouse, who extended the same building over 50 years earlier. The renovation saw the roof extended upwards to include an additional mansard storey, although the balustrade remained. Meanwhile, the original Cheapside entrance was turned into a portico over the street, so now provides temporary shelter to busy City workers strolling past the building. At some point in the early ’60s, a modern bracketed clock was added to the Cheapside-facing façade, topped by a gold sculpture of Atlas.

After 123 years on Cheapside, it was the end of an era when Atlas Assurance was acquired by the Royal Exchange Assurance in 1959. Although Atlas Assurance no longer exists, its name lives on in the building, which was Grade II listed in 1972. It was later designated as part of the Guildhall Conservation Area in 1981. Today, the building includes a Barclays Bank branch on the ground floor, with rented office space on the upper floors.

Posted on 16 May 2020, in Architecture, History, London and tagged City of London, Georgian. Bookmark the permalink. Comments Off on Atlas House, Cheapside: Italianate architecture, Greek gods and insurance.

← Lawyers, lakes and lost villas: The story of Richard Shawe and Casino House of Dulwich
A relic of Lambeth industry | The former Royal Doulton building →