Egyptian Hall | The story behind Piccadilly’s lost hall of wonders 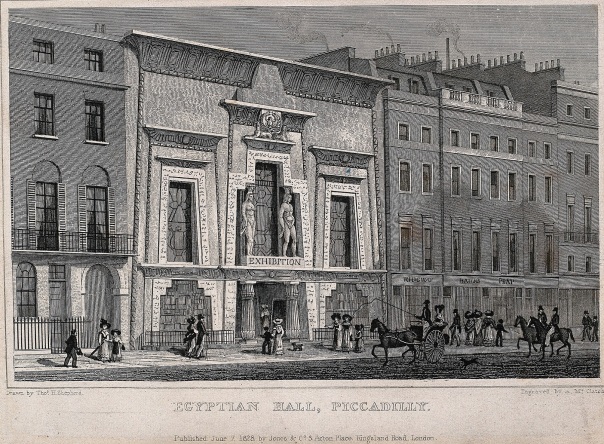 The Egyptian Hall on Piccadilly in 1828.
Engraving by A. McClatchy, 1828. Wellcome Images

Over the centuries, many London landmarks have come and gone. Sometimes bombs or fire were to blame, but others have fallen victim to changing tastes. One these lost London buildings was the Egyptian Hall, a piece of architectural pastiche that was home to many attractions and exhibitions during its 93 year history.

The Egyptian hall was originally a museum on Piccadilly, built in 1811-1812 on the site of the original Hatchards book shop (now at 187 Piccadilly) and the White Horse Inn. Following Horatio Nelson’s (1758-1805) victory over the French at the Battle of the Nile in 1799, public interest in Egypt began to grow. By the early 19th century, wealthy Europeans were desperate for a genuine piece of Egyptian history. For those who couldn’t afford it, seeing millennia-old antiquities in an exhibition would have to suffice. English traveller and naturalist William Bullock (1773-1849) commissioned architect Peter Fredrick Robinson (1776-1858) to design a museum to house his collection. Erected on a budget of £16,000, the Egyptian Hall was the first English building to be influenced by Egypt architecture. It took inspiration from the Egyptian room at collector Thomas Hope’s (1769-1831) house in Marylebone. He filled his Georgian terrace in Duchess Street with antiquities from ancient Greece, Egypt, Italy and Turkey and opened it to the public. 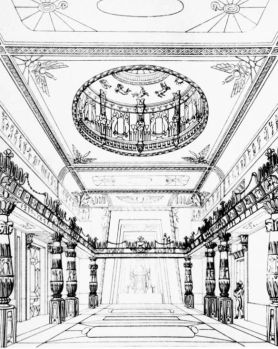 The Egyptian Hall’s Great Hall in 1819.
(Image from Wikimedia Commons)

The hall’s grand façade outshone the simple Georgian terraces surrounding it. Many of its details were copied from the Dendera Temple complex in Egypt, such as the winged mundus, scarabreus, columns and hieroglyphics. Above the entrance were two huge Coade stone figures of Isis and Osiris by either sculptor Lawrence Gahagan or his son Sebastian (1778-1838). Inside, was a Grand Hall, lecture rooms, a bazaar and a large central room called ‘the Waterloo Gallery’. Over its lifetime, the hall was also known as Bullock’s Museum or the London Museum. In 1816, an exhibition of Napoleonic relics was a big success. Bullock made £35,000 from the 220,000 visitors to the display, which included Napoleon’s field carriage from the Battle of Waterloo. In 1819, Bullock sold off his collection of objects in an auction lasting 26 days and embarked on more adventures.

The building was then converted into an exhibition hall. Italian adventurer and strongman Giovanni Battista Belzoni, aka ‘The Great Belzoni’, (1778-1823) showcased his collection from May 1821, acquired from his extensive travels. Four years previously he had taken the white sarcophagus of Seti I from his tomb in Egypt’s Valley of the Kings. A year later, Belzoni put up his collection for auction. English architect Sir John Soane (1753-1837) bought the sarcophagus (now found in the Sir John Soane Museum) for £2,000 – the most expensive item in his collection. Over the next few years, the hall was used for exhibiting art by the Old Water-Colour Society and the Society of Painters in Water Colours, costing only a shilling to enter. Paintings by Joseph Mallord William Turner (1775-1851) were among those displayed in the early 1820s. 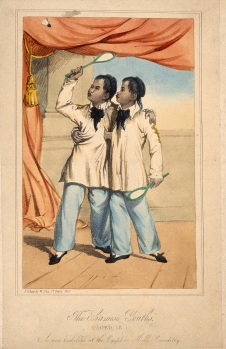 Conjoined twins Chang and Eng Bunker during their run at the Egyptian Hall in 1829.
© Wellcome Library, London (via Wikimedia Commons)

Bookseller George Lackington (1744-1844) took over the hall’s lease in 1825 and continued to use the building for art exhibits, as well as panoramas and entertainment shows. Rather uncomfortably for us in the 21st century, unusual acts of human life were exhibited as ‘freak shows’, a popular entertainment at the time. One of these acts were the ‘Siamese Twins’, conjoined brothers Chang and Eng Bunker (1811-1874), who made their appearance in Piccadilly in 1829 while on a tour of the UK and Ireland. In 1844, American dwarf Charles Sherwood Stratton, aka ‘General Tom Thumb’, (1838-1883) appeared at the Egyptian Hall while on a European tour. During that same trip, he was presented to Queen Victoria and her toddler son, the future King Edward VII. African-American conjoined twins Millie and Christine McKoy (1851-1912) also appeared at the hall in 1855 under their stage name ‘The African Twins’ when they were only four. (See the 1855 playbill for their appearance from the Wellcome Library). Another 19th century celebrity who appeared at the hall was ‘Chang the Chinese giant’, Zhan Shichai (1840s-1893) in 1865, who was claimed to be over 8ft tall.

From a rather mixed bag of exhibitions in the first half of the 19th century, things got stranger still when theatre manager William Morton (1838-1938) took on the Hall and transformed into England’s Home of Mystery. The building became renowned by Victorian Londoners as a destination for those seeking magic, spiritualism and illusions. Spiritualist Dr Hugh Simmons Lynn (1836-1899) – who inspired Harry Houdini – performed seances and ‘mid-air extravaganzas’ at the hall in 1873. Victorian magic duo John Nevil Maskelyne (1839-1917) and George Alfred Cooke (1825-1905) – who were managed by Morton – hosted a show at the venue for 31 years. It’s been claimed Maskelyne invented the illusion of levitation, as well as the coin-operated toilet lock. One advert for their show in 1879 promises ‘a man’s head cut off without loss of life!’ Maskelyne and Cooke’s final performance at the Egyptian Hall took place on 5 January 1905. A month later, Cooke died, with Maskelyne forming a new partnership with David Devant (1868-1941) and relocating to St George’s Hall in Langham Place (demolished in 1966).

In 1905, the Egyptian Hall was demolished, along with neighbouring shops after the lease expired. In its place, a seven storey building was designed by William Woodward, including offices and shops on what is now 170-173 Piccadilly. The building has a nod to its predecessor with the name Egyptian House.

This site uses Akismet to reduce spam. Learn how your comment data is processed.