Find out where the playwright lived, socialised and, sadly, suffered during his time in London. 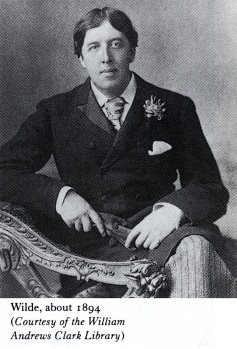 Oscar Wilde (1854-1900) was one of the world’s most famous playwrights and poets. Born and brought up in Ireland and dying young in France, he also spent a long period of his life in London. Having studied at Oxford, the young graduate moved to London around 1878, where he would remain for 17 years. During his adult life in London, he tasted success with plays such as ‘Lady Windermere’s Fan’, ‘A Woman of No Importance’, and ‘The Importance of Being Earnest’. However, this was cut short by revelations about his sexuality, which tragically led to his downfall in a society which was not so inclusive as it is today. His last six months in the capital were sadly spent behind bars. Upon his release from prison in Reading, he sailed to France and never returned to London, or the UK, ever again. He died of meningitis in Paris at the tender age of 46 following three years in exile.

After graduating from Oxford, Wilde moved in with his university friend and society painter Frank Miles (1852-1891). Wealthy Miles had commissioned architect Edward William Godwin to build him a house, complete with artist’s studio, in 1880. Wilde is listed on the 1881 census as a ‘boarder’ at what was then 1 Tite Street.

Wilde married Constance Lloyd in the Anglican church in May 1884. The Grade II* listed building was designed by Victorian architect George Edmund Street (1824-1881) and completed just two years before the Wildes’ wedding. A plaque to commemorate the Wildes’ ceremony was erected at the east end of the church in 2016.

Wilde and his wife Constance lived together at 16 Tite Street (now 34) from 1884-1895. It was their family home to raise their two sons Cyril (1885-1915) and Vyvyan (1886-1967). Despite Wilde’s sexuality and his affairs, the boys had a good relationship with their father until his arrest. It was at this house that Wilde had a run-in with his lover’s father, the Marquess of Queensberry in June 1894 after he caught the men together at a restaurant. Queensberry threatened to “thrash” Wilde if he caught him with Bosie again. Following the writer’s conviction, Constance changed their sons last name to Holland and got her husband to relinquish his rights to the boys. Today, there is a blue plaque commemorating Wilde’s residence at the house.

Several of Wilde’s plays made their debut at the now-demolished St James’s Theatre in St James. Built in the late Georgian era, the theatre was managed by actor Sir George Alexander (1858-1918) when Wilde was writing plays. The two creatives started a professional partnership, with Lady Windermere’s Fan being presented at the theatre in 1892. In February 1895, the opening night of The Importance of Being Earnest was under threat of disruption by Queensberry, who planned to throw rotten vegetables on stage. However, Wilde received a tip off and had the theatre heavily guarded by police. Queensberry raged in the street outside for three hours, before finally going home. Despite the play’s initial success with critics and audiences, it was short-lived as Wilde was arrested the following April. As public outrage erupted at the Wilde scandal, Alexander tried to keep the run going by removing the playwright’s name from the bill, but to no avail. The production ended prematurely after just 83 performances. St James’s Theatre was eventually demolished in 1957 after 122 years.

Wilde was an enthusiastic smoker, having acquired the habit while studying at Oxford. While cigars and pipes were popular at the time, he preferred cigarettes, once declaring: “A cigarette is the type of a perfect pleasure. It is exquisite and it leaves one unsatisfied.” The poet frequently bought his cigarettes from James J Fox, London’s oldest cigar merchant. Today, the shop has a smoking museum downstairs which includes Wilde’s ledger and a High Court letter showing an outstanding balance for the writer’s purchases made between September 1892 and June 1893.

Wilde was generally clean-shaven and often visited this top Mayfair barber. Opening in 1805 and securing a royal warrant, it’s the oldest barbershop in the world.

The exclusive Albemarle Club in Mayfair was unusual during Wilde’s time because it was a members’ club open to both sexes. Oscar and his wife Constance were both regulars. This club provided a key role in Wilde’s eventual downfall. Scottish nobleman John Sholto Douglas, the 9th Marquess of Queensberry (1844-1900), arrived at the club on 18 February 1895 demanding to see Wilde, who he (correctly) suspected of having a love affair with his son Lord Alfred Douglas (1870-1945). The porter blocked his entry, so Queensberry left a calling card with the message, “For Oscar Wilde, posing somdomite” (sic). Wilde didn’t receive the card until he turned up at the club two weeks later and was so offended by it, he decided to sue Queensberry for criminal libel. It was the libel trial which led to evidence being produced about Wilde’s sexuality, leading to his subsequent arrest and conviction for gross indecency.

Originally one of the first French restaurants in Soho, Kettner’s opened in 1867 and hosted Wilde, among many other prominent names, at its lounge and champagne bar. Today, Kettner’s is a private members’ club run by Soho House and comprises seven Georgian townhouses.

As one of London’s most historic department stores, Liberty dates back to 1875 (although not the current mock Tudor building you see today). Ahead of his U.S. tour in 1882, Wilde bought a wardrobe full of clothes from Liberty as he presented himself to Americans as a well-dressed ‘dandy’. He gave the store the accolade: “Liberty is the chosen resort of the artistic shopper.”

The ill-fated affair between Wilde and Douglas started at a tea party at the Café Royal in summer 1891. The latter was a 22-year-old aspiring poet, while Wilde’s career was already established. By late 1892, Queensberry had begun to grow suspicious of his son’s closeness to the playwright. His fears were temporarily laid to rest after he was charmed by Wilde with cigars over a boozy lunch at the Café Royal. However, by early 1894, the Marquess was convinced Wilde was gay and threatened to disinherit Douglas if he continued his affair. At the same venue on 24 March 1895, Wilde had a fierce debate about his libel action against the Marquess during a meeting with Frank Harris and George Bernard Shaw, who advised him to drop it. Harris apparently warned Wilde: “They are going to prove sodomy against you,” and suggested he flee to the continent. Wilde was furious and was said to have raged: “It is at such moments as these that one sees who are one’s true friends.” The Café Royal is now a hotel, with its club now renamed the Oscar Wilde Lounge.

The Old Bailey was the scene of both Wilde’s failed trial against the Marquess, and his own trial for gross indecency. The Marquess’s trial for criminal libel opened on 3 April 1895, with Queensberry having to demonstrate his accusation that Wilde was a “sondomite” was true to avoid conviction. He had hired lawyers to find evidence of the writer’s homosexuality. Queensberry never got to testify as the prosecution was withdrawn following Wilde’s appearance as a witness. A few weeks later, Wilde was back at the Old Bailey, but this time he was in the dock. He was released on bail on 7 May 1895, before returning for his criminal trial on 21 May 1895. Wilde was convicted of gross indecency a few days later and sentenced to two years hard labour.

Prior to his legal troubles, Wilde had often taken a room at the hotel on late nights out. After Wilde’s libel trial against Queensberry collapsed, he hid out at the Cadogan Hotel in Chelsea – a short distance from his marital home with Constance and their boys. Despite friends advising him to flee to France, he stayed in Chelsea, apparently drinking heavily as he awaited his fate. On 6 April 1895, Wilde was arrested in room 118 – now part of the Royal Suite. Poet laureate and heritage campaigner Sir John Betjeman (1906-1984) immortalised the arrest with his 1933 poem: ‘The Arrest of Oscar Wilde at the Cadogan Hotel.’

After Wilde was arrested in Chelsea, he was taken to Bow Street police station, where the charges were read against him and locked up in one of the cells overnight. The following day he was taken to Holloway Prison. Bow Street was one of the most famous magistrates courts in England, before closing in 2006 after 266 years. It’s due to reopen as the luxury Nomad London hotel, with a police museum.

Wilde was briefly held as the notorious Newgate Prison (next door to the Old Bailey) following his conviction for processing, before being sent to Pentonville Prison. Newgate Prison was demolished in 1902 following a 700 year history.

Wilde’s sentence for ‘hard labour’ began at Pentonville Prison in May 1895. His punishment was picking oakum (separating rope fibres) and walking on a treadmill. His only permitted reading was The Bible and John Bunyan’s Pilgrim’s Progress. After a few months, he was transferred south to Wandsworth.

The Courthouse Hotel in Soho

When Wilde first sued Queensberry for libel, the initial proceedings took place at the former Marlborough Street Magistrates Court. The Albemarle Club’s porter Sidney Wright and Scotland Yard Detective Inspector Thomas Greet both gave evidence on 2 March 1895, while Wilde and Queensberry made their depositions. The current building, which has been converted into the luxury Courthouse Hotel, was erected in 1913 as a replacement for an older building where Wilde would have visited.

Once Wilde was transferred to Wandsworth Prison in late 1895, his health began to deteriorate. He collapsed from hunger and illness, and ruptured his right ear drum in the fall, prompting a two-month stay in the infirmary. On 23 November 1895, he was transferred by train to Reading Gaol, being heckled by fellow passengers at the station. It was at Reading he served out the remainder of his sentence.

A guide to Jane Austen’s London | A walk around ‘town’

← Step inside Whitehall’s jewel: The Foreign and Commonwealth Office building
Victoria House in Whitefriars | An unusual blend of 19th century architecture →
×
<span>%d</span> bloggers like this: