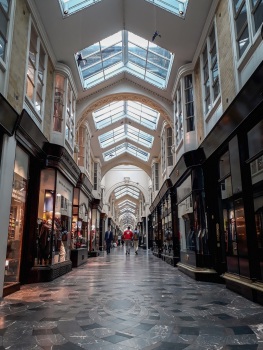 As part of Metro Girl’s history posts, occasionally the blog focuses on some of London’s retail history. Known as one of the world’s fashion capitals, London boasted some of the top stores in the world – and still does today. While some of the capital’s most iconic departments stores such as Liberty, Harrod’s and Harvey Nichols still exist, many have disappeared from the high street permanently. Stores such as Pratt’s, Barkers, Bourne & Hollingsworth and Swan & Edgar are just some of the former retail titans who have vanished over the decades.

As well as the traditional shopping high street, there are a variety of all-weather retail enclaves, such as shopping arcades or malls. Some Georgian, Victorian and Edwardian arcades still exist today and have managed to survive changing fashions, bombing campaigns and fires. In fact, did you know that London is home to the oldest shopping arcade in the world?

All of Metro Girl’s blog posts about the history of some of London’s shopping arcades and department stores can be found here. More will be added over time:

Trading, theatre and Tudor merchants | The story of The Royal Exchange