Jewel Tower | A Medieval survivor of the Palace Of Westminster

The history of the 14th century tower opposite the Houses of Parliament. 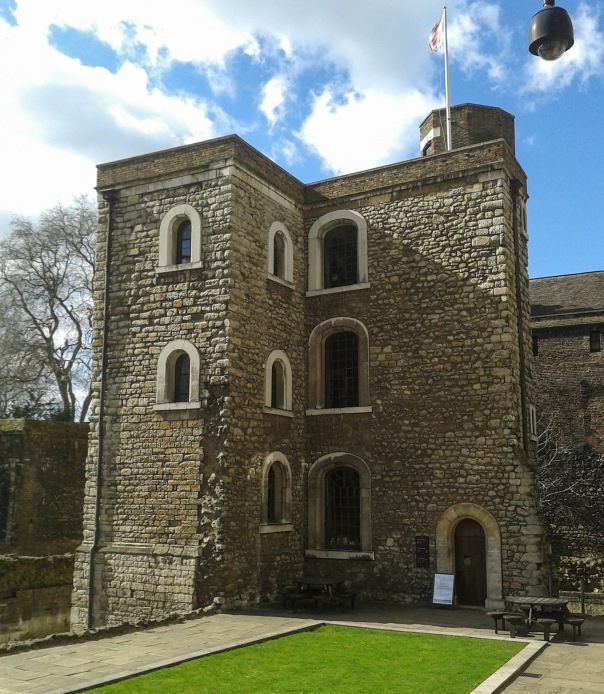 When it comes to London’s royal palaces, most of them tend to be rather young, with the oldest parts of Buckingham Palace dating back to 1703 and Clarence House, a few years shy of its 200th anniversary. However, long before the monarch resided at Buck House, the King or Queen had a home in the huge Palace Of Westminster. Today, the title belongs to the Houses of Parliament, the seat of our Government. 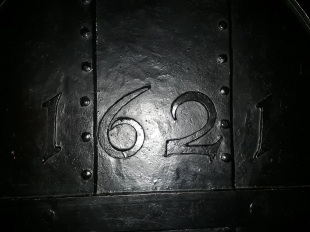 Most of the Medieval Palace of Westminster was destroyed by a huge fire in the 1800s, to be rebuilt as the iconic masterpiece, which remains today. However, two buildings managed to survive, the 11th century Westminster Hall, and the 14th century Jewel Tower. Now owned by English Heritage, the diminutive Jewel Tower is open to the public. Recently, I paid a visit to this small, but interesting piece of Medieval London. It’s a small space with the exhibition taking about an hour to see.

The Jewel Tower was built around 1365-6 at the southern end of the Palace of Westminster to house the treasures of King Edward III (1312-1377). The Tower stood at the end of the garden and was protected by a moat to the south and west of the building. It was built under the direction of master mason Henry Yevele (1320-1400) and master carpenter Hugh Herland (1330-1411) on land which had been appropriated from Westminster Abbey, to the chagrin of the monks. The keeper would have worked on the ground or first floor, logging the King’s treasures coming in and going out of the Tower. The most valuable goods were kept on the second floor. 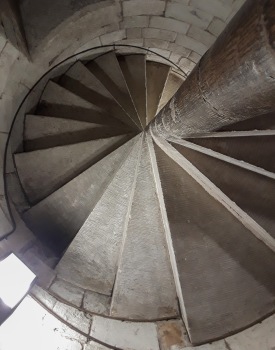 For 150 years, the Tower was used to house the subsequent Kings’ treasures until a fire at the palace in 1512. The building then became home to less valuable items, such as clothing, bed linen, furniture and royal children’s toys, according to an inventory in 1547. In 1600, the building was repurposed for the Government, rather than royals, when it became a parliamentary office. A three-storey timber extension was added to the side of the Tower as a house for the Clerk of the Parliament. The ground floor of the Jewel Tower became the kitchen and scullery, while the first floor was used as a repository for various parliament documents. In 1621, the building was renovated to become more secure to protect the important documents. On the first floor, a brick vault was added with a metal door featuring the year inscribed on the exterior and the cipher of King James I (1566-1625). That very door still exists today and can be seen on your visit.

By the 18th century, the Tower was apparently a bit of a state so work was taken to renovate and improve it. Larger windows and a new chimney were added, while the building was made more fireproof to protect the documents inside. Throughout the century, the Tower was gradually hidden by the buildings popping up around it. By 1827, the House of Lords’ records had been moved out of the Tower because it was too small and it was known as part of Old Palace Yard, with the name Jewel Tower dropping out of use.  END_OF_DOCUMENT_TOKEN_TO_BE_REPLACED

Memorial to Wat Tyler and the Peasants’ Revolt 1381 in Smithfield

The history of the peasants’ revolt immortalised on the walls of St Barts’ Hospital. 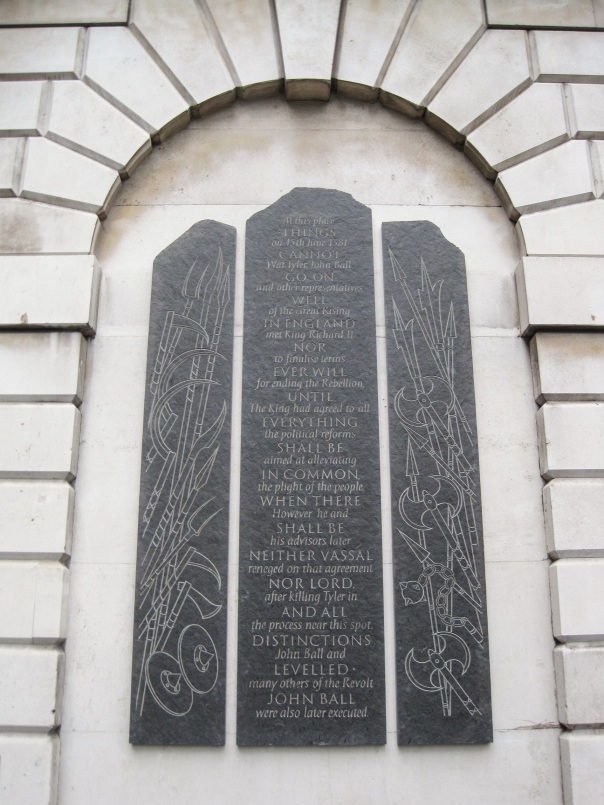 The memorial to Wat Tyler and the Great Rising of 1381

Many assume the Tower of London to be one of the bloodiest locations in the capital due to its history of prisoners and capital punishment. Although famous these days for its meat market, Smithfield‘s history features butchery of a different kind… of humans. The area, located in the ward of Farringdon Without in the north-west corner of the City of London, has played host to many bloody executions over the centuries, most famously Scottish patriot William Wallace (1270-1305). 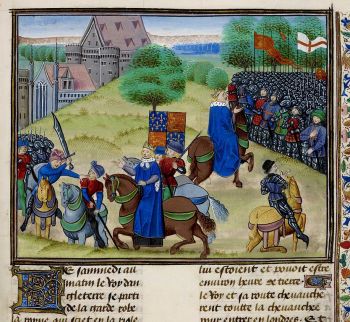 The death of Wat Tyler. From a manuscript copy of the Chronicles of Jean Froissart, created 1483).
Image from Wikimedia Commons

While Wallace is an iconic figure in Scottish history, the name Wat Tyler doesn’t have the same recognition it deserves. Back in 1381, many Englishmen were unhappy with the state of living. In the 14th century, under the young King Richard II (1367-1400), a new kind of poll tax had been introduced, which was a fixed rate regardless of an individual’s earnings. Peasants were also tiring of the serfdom system of labour, meaning they didn’t have a choice in who they worked for.

In June 1381, thousands of workers from Kent advanced on London, led by Wat Tyler and inspired by radical cleric John Ball (1338-1381), demanding an end to serfdom and fairer taxes. The boy King, who was just a teenager at the time, retreated to the Tower of London for protection as many of his troops were abroad. On 13 June, the rebels entered London and were joined by some locals as they destroyed the Savoy Palace (home to John of Gaunt, who was widely blamed for introducing the poll tax), burned law books and buildings at Temple, killed Royal government associates and opened gaols.

On 14 June, King Richard met with the rebels at Mile End, East London, and agreed to their demands. Meanwhile, a separate group of rebels took over the Tower of London and beheaded several royal figures. Overnight, the King planned to regain control of the City. On 15 June, King Richard and around 200 men gathered in Smithfield outside St Bartholomew’s Priory, while thousands of rebels were on the western end. Tyler stepped forward to talk to the King, who wanted to know why the rebels hadn’t left London. Tyler explained he wanted their agreement drawn up in a charter and was shocked to find the King reneging on his previous promises. An argument then broke out between him and some of King Richard’s associates, with the Mayor of London, William Walworth (d.1385) stabbing Tyler. Royal squire Ralph Standish (1333-1415) then stepped in and repeatedly stabbed Tyler with his sword. resulting in the latter’s death. With the rebels’ leader dead, the King’s men were able to take control of the situation and the men dispersed. Tyler’s head was cut off and displayed on a pole on the southern end of London Bridge. Today, Walworth’s sword is preserved in a display box in Fishmongers’ Hall by London Bridge. 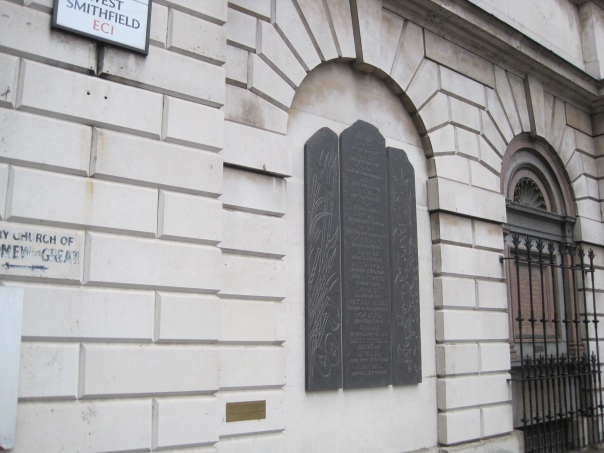 Over 600 years after his death, Wat and his cause have finally been commemorated with a memorial in Smithfield, in the very place he breathed his last breath. Local resident Matthew Bell commissioned a memorial by sculptor Emily Huffnung, which was unveiled by film-maker Ken Loach on 15 July 2015. Made of Caithness stone from Scotland, the triptych is mounted on a blocked window bay of St Barts’ Hospital. A few feet away are older memorials to William Wallace and 60 Protestant martyrs, killed in the 16th century under the reign of Queen Mary I (1516-1558), aka Bloody Mary.

The memorial reads: ‘At this place on 15th June 1381, Wat Tyler, John Ball and other representatives of the Great Rising met King Richard II to finalise terms for ending the Rebellion. The King had agreed to all the political reforms aimed at alleviating the plight of the people. However he and his advisors later reneged on that agreement, after killing Tyler in the process near this spot. John Ball and many others of the Revolt were also later executed.’ John Ball is then quoted: ‘Things cannot go on go on (sic) well in England nor ever will until everything shall be in common when there shall be neither vassal nor Lord, and all distinctions levelled.’

The history of 14th century ruins of a former royal residence. 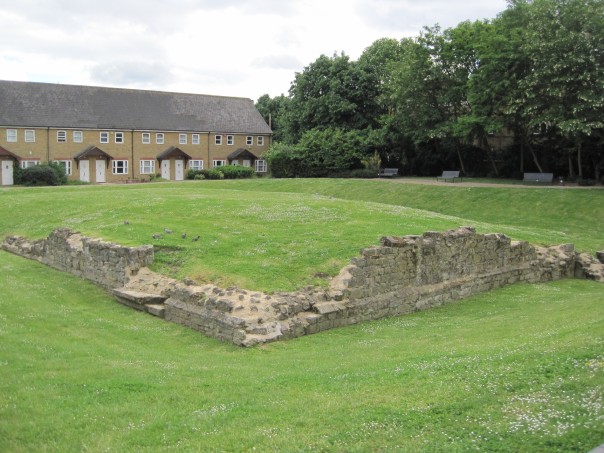 There are many royal London residences past and present visited by tourists today, such as Buckingham Palace and Hampton Court Palace. However, not all monarchy’s abodes have survived the test of time. The remains of one such royal residence can still be seen today, and in an area somewhat off the usual tourist trail. 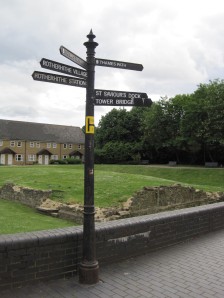 The house was once surrounded by a moat, but has rather drier enclaves these days

The foundations of King Edward III‘s (1312 – 1377) manor house stands near the River Thames in Rotherhithe. With the grass surrounding the ruins dipped low, you could easily imagine where the former moat used to flow around it. The house was built as a country escape outside the City of London by the King in 1353. At the time, the land upon which the foundations were laid was a low-lying island surrounded by marshland. The original manor house comprised of several stone buildings around a court. Water flowed around three sides of the complex so the king could arrive by boat along the Thames. On site included a gatehouse, hall with grand fireplace, kitchens and the king’s private chambers.

Although many royal residences were established as bases for hunting, Rotherhithe had no royal park so this function was ruled out. However, King Edward III was known as a keen falconer, with some historians believing he used the manor house as a base for falconry over the river or surrounding marshland.

Following Edward’s death, the waterline changed in the decades that followed, so by the late 16th century, the south bank of the river had reclaimed some of the Thames, pushing the waterline north so a road ran alongside it. However, the moat remained and eventually surrounded the manor house on all four sides. The Crown sold the property to private owners and it was known as ‘the moted place’. In the 17th century, there was a pottery on the site, followed by warehouses during the 18th and 19th centuries. In 1907, the façade of the north wall of the house had actually been incorporated into a warehouse building. The warehouses were eventually demolished in the 1980s as part of a redevelopment plan, giving archaeologists at the Museum Of London the chance to excavate and restore the site in 1985. Fortunately, the remains weren’t rebuilt over and are visible to the public today to visit.

Metro Girl likes: While you’re in the area, check out the nearby Angel pub, with an outdoor terrace overlooking the Thames. 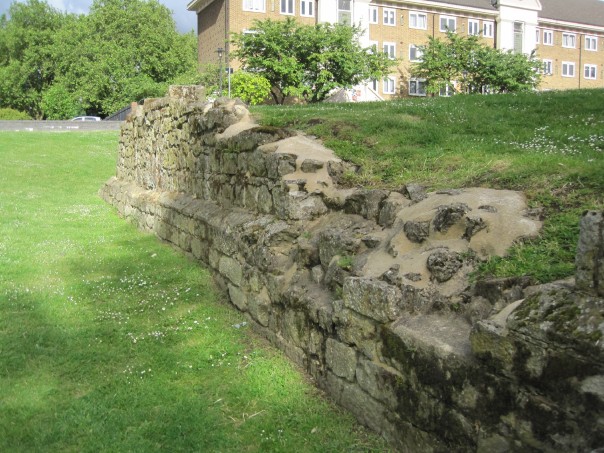 The north wall of the manor house was reused in subsequent buildings, including warehouses in the early 20th century

To read about the Medieval ruins of Winchester Palace, just over 30 minutes walk away, click here.

To read about Metro Girl’s visit to the Thames Tunnel built by Brunel, click here.