Drink and be entertained in Cellar Door, a bar in a converted Victorian men’s public toilet 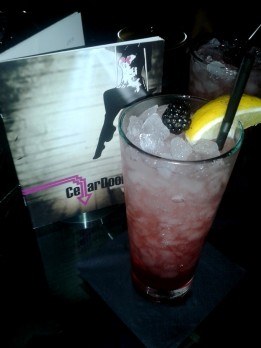 Cellar Door is perhaps one of the most unique drinking spots in the capital. Located at Zero Aldwych on the junction with Wellington Street, this intimate bar and club is actually in a former Victorian men’s public toilet! According to their website, it was previously one of  the most infamous men’s toilets in Theatreland, with Oscar Wilde, Sir John Gielgud and Joe Orton among its former users. However, don’t be fooled and think you may be drinking among porcelain urinals. This small space has been cleverly converted into an entertainment venue, with just the square windows from the street above the only hint at its former incarnation.

The entrance certainly gives a hint of the grandeur which lurks below with red VIP-style velvet rope outside the door. Once you’re downstairs, a doorman sweeps open the velvet curtain to reveal the space – a bustling well-lit bar to the left, a mix of sofa and bar stool seating and a little ‘stage’ area in the corner. The venue includes just two actual toilets – which, fortunately, could not be further from the ones which would have stood here over 100 years ago. The cubicle doors appear to be worryingly clear when you first step in, but cleverly ‘frosts’ over when you lock it… so make sure you do! Entrance is free and so is the entertainment, but a service charge is added to your drinks to cover both.

Unique: The red velvet ropes and neon sign gives a hint of what’s to come

Order a cocktail, bottle of wine or even snuff at the bustling bar

A few female friends and I visited on a Saturday night and were lucky to get the last table and stools. As you would expect, there isn’t much space so it’s worth arriving early or reserving. The bar is open from around 6pm and includes entertainment from 9pm nightly and gets full pretty quickly. We managed to get in a round of cocktails during the Happy Hour (1/3 off), which finishes at 8pm. Their extensive menu features a range of original and classic cocktails, with many themed around the bar’s style icons Marilyn Monroe, Betty Page and Dita Von Teese. I started with an Angel Eyes (Nicaraguan white rum, Blackberry liqueur, Campari, lemon juice and soda), a sharp but refreshing long drink. I followed with an old classic – a Moscow Mule (Vodka with fresh line, sugar and ginger). As well as cocktails, wine, hot drinks, they also sell snuff, which fits in with the retro basement dive vibe. The Cellar Door ‘Angel’ waitress serves your drinks with complimentary popcorn, although there is a small bar menu, serving food like olives, nuts and pitta plates.

Fancy some snuff on the side of your cocktail?

At 9pm every night, the entertainment kicks off. Includes cabaret, DJs, magic acts, film screenings, drag queens and open mic nights. On the night we were there, we were provided with a soundtrack and some laughs by a flamboyant drag DJ. Unfortunately, we missed the burlesque act which performed later on, so I will have a make a repeat visit to see more of the entertainment. Overall, I really liked Cellar Door. The venue was cosy and intimate, the bar staff were friendly and what we saw of the entertainment was good. The clientele was a friendly crowd ranging from 20s to 40s. The cocktails were really delicious and I was tempted by many of the original concoctions, so will have to make a return visit to try those out.

To read more of Metro Girl’s bar and restaurant reviews, check out our contents page.

The history of the disused London Underground station Aldwych.

The eastern platform at Aldwych station, which was taken out of use in August 1917

I have always been fascinated with derelict and abandoned places since I was a child. It was probably the result of reading too many Enid Blyton books and dreaming of being an explorer. Growing up in London, I have seen a few stations renamed or cease to exist over the years – such as the King’s Cross Thameslink station where I used to pass through on my way to work in the early Noughties or the Jubilee line platforms at Charing Cross. I had read about the disused underground station Aldwych online – and passed the familiar red tilework of its former entrance on The Strand many times and found there were rare opportunities to actually visit it.

After ages of keeping my eyes peeled for a potential chance to visit, the London Transport Museum occasionally opens the doors for its Hidden London tours of Aldwych for a limited time only so a friend and I jumped at the chance to go. The one hour tour was arranged by the London Transport Museum with volunteers generously providing their time to share their knowledge of the history of the Grade II-listed building.

The original Edwardian booking office, which was closed in 1922

Finding out the history of Aldwych – a station just a stone’s throw away from Temple – could easily make you question why it was even opened in the first place. Owners knew it wouldn’t be a busy station and despite building three lift shafts – which could hold six lifts – only one was ever used. It was the lifts which prompted the final closure of the station in 1994 because the expense of fixing them could not be justified for such a lightly used station.

Aldwych station was originally conceived as the southern terminus for a new underground railway line owned by Great Northern and Strand Railway in the late 1800s. However when the tube project merged with another – becoming the Great Northern, Piccadilly and Brompton Railway – the Piccadilly line was born, with Strand station – as it was known in the early parts of its life – becoming a branch off the main line. 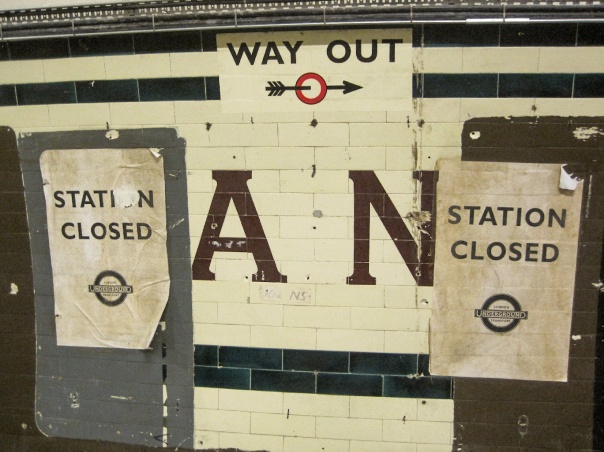 Remnants of Aldwych’s former name: The station was called Strand – with some of the tiling still visible on the eastern platform – until 1915

After the demolition of the Royal Strand Theatre on the site, construction of The Strand station started in October 1905 and was opened in November 1907. The design followed that of architect Leslie Green‘s standard station design – distinct dark red glazed brick on street level, with platform walls tiled in cream and green. Above the entrance, featured arched windows with office space. Green also designed Oxford Circus, Elephant & Castle and Leicester Square stations, among others. Strand station was a L shaped building with entrances and exits on The Strand and Surrey Street – which can still be seen today.
END_OF_DOCUMENT_TOKEN_TO_BE_REPLACED