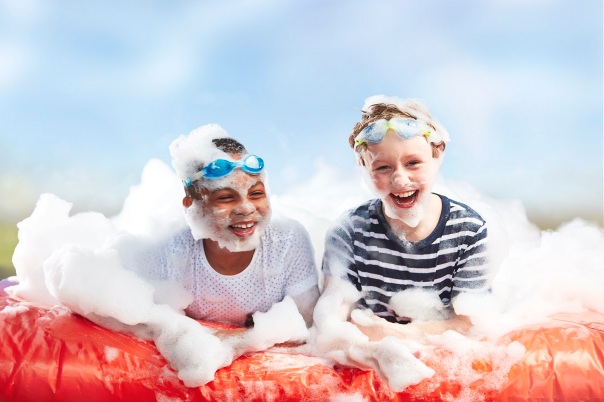 This summer, Battersea Park is being transformed into a water extravaganza for one day only. The riverside park will play host to Splash Fest, a family-friendly aqua obstacle course, on Sunday 7 August.

Splash Fest will feature five zones of water-themed challenges and games spread over a 2.5km trail. Organised by lifesaving charity Royal National Lifeboat Institution (RNLI), the event will be a great family day out for family with children aged 7-12.

Among the zones includes ‘Crazy Canyon’, with a series of pools to cross using floating devices and a giant inflatable water slide. ‘Splash ‘n’ Shoot’ will see guests navigating a giant boat before aiming at floating targets on the lake. Meanwhile, you’ll get the chance to dodge geyser-spouting waters at ‘Wild Wild Waters’. Next, the ‘Slip-Slide Stream’ features a toboggan-style water slides from sedate and slippy to fast and foamy. Finally, the ‘Bubbly Brook’, features giant bubbles, a maze, music and bandstand hidden amongst a sea of foam.

In addition to the splash-tastic fun, there will be entertainment, food, drink and a drying-off area in the Splash Out Zone, where you can find out all about the lifesaving work done by the RNLI. 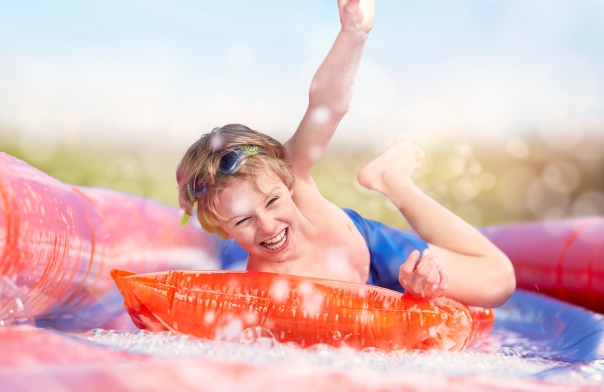 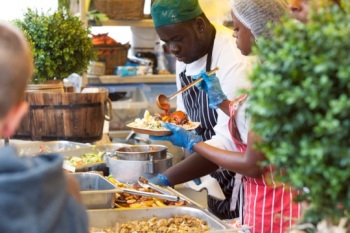 With London fast becoming one of the biggest foodie destinations in the world, it’s no surprise that there is a growing demand for food festivals in the capital. Known for our wide and varied palate, Londoners are open to trying a range of cuisines from around the world on their doorstep.

After already fulfilling appetites across the country in Brighton, Bristol and Edinburgh over the summer, this weekend sees the team behind the Foodies Festival come to London for The Big Feast at Battersea Park.

Held over this weekend, a host of celebrity chefs and popular food and drink brands will be converging on SW11 for this new festival. Among those showcasing their skills and delicious dishes are Matt Robinson (Bluebird), Ben Tish (Salt Yard), Matt Pickop (Maze), the Michelin-starred Robert Ortiz (Lima), 2013 MasterChef winner Natalie Coleman and legendary Tuscan chef Giancarlo Caldesi. As well as chef theatres, masterclasses and tastings, there will also be Street Food Avenue, where visitors can sample street and artisan food.

As well as food, there are plenty of opportunities to drink, including a Tequila Beach (a pop-up tequila beach bar serving cocktails) and Grand Marnier’s Hidden Charm Bar which will feature ‘flamboyant characters, tempting tipples, great music and a few unexpected surprises’. Other attractions include the Ibiza Chill Out Cocktail Bar, Vintage Tea Tent, Bar on a Bike, children’s cookery theatre and live music. 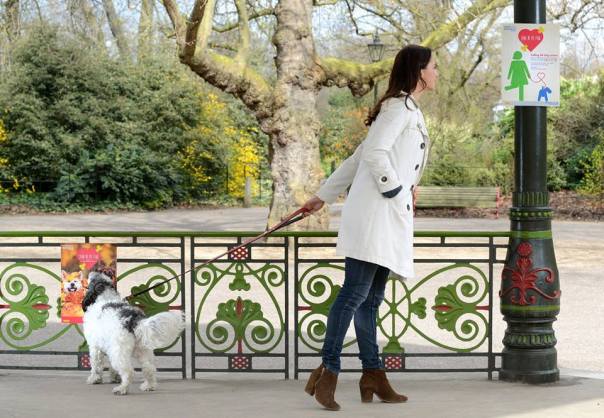 Walk your dog and potentially find love at the same time
© Match.com

Any dog-owning singleton knows how important it is that your future soulmate is also a dog lover. Imagine the horror if George Clooney or Harry Styles (whoever floats your boat… I don’t judge!) declared their undying love for you… but was also highly allergic to your four-legged friend!

This is where professional cupids Match.com come in. The online dating agency are hosting a special one-off dating event for dog-owners on Saturday 5 April 2014 in Battersea Park. As well giving singletons the chance to meet other dog lovers, the setting is a lot more relaxed than other dating events, making it easier to strike up a conversation. There will be complimentary refreshments for the humans and activity sessions and a play area for the dogs. Made In Chelsea star Lucy Watson and her beloved dog Digby – who are frequent visitors to Battersea Park in the E4 show – will also be in attendance.

Swing out sister | Learning to trapeze with Gorilla Circus 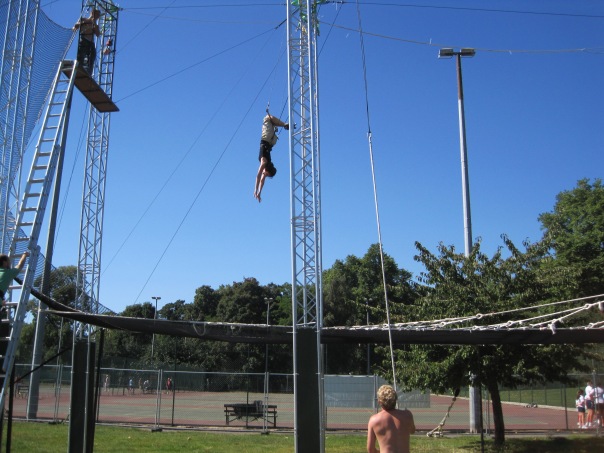 Hanging out: The basic bar swing at Gorilla Circus in Battersea Park 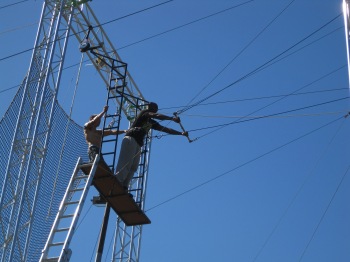 Nerves: Balancing on the edge of the ledge preparing to swing

For many women, the seminal TV series Sex And The City inspired them to search for the perfect shoe, call time on a dead-end relationship… or even visit Ann Summers for the first time. However, as a bit of an adrenalin junkie, there was something Carrie Bradshaw did in one particular episode that inspired my latest adventure in London. Die-hard SATC fans will remember the episode, called The Catch quite appropriately, in Season 6 when Carrie has a trapeze lesson.

Well the dream of trapezing has stayed with me, and nine years after watching the episode, I finally got to try it out this week. Although they’ve been around for four years, I have only learned about the existence of Gorilla Circus this summer. After speaking about it with a few friends – many who thought I sounded crazy – I realised their outdoor sites were only on for the summer before moving inside, so I finally bit the bullet and booked a session.

I’ve always been an adrenalin junkie – I’ve done two skydives, a parachute jump and a bungee, as well as ridden numerous rollercoasters, but I’m finding as I get older, the fear builds up the longer I don’t do anything adrenalin fuelling. However, on the morning of my two-hour ‘Flying Trapeze Class’, I admit I felt sick with nerves. 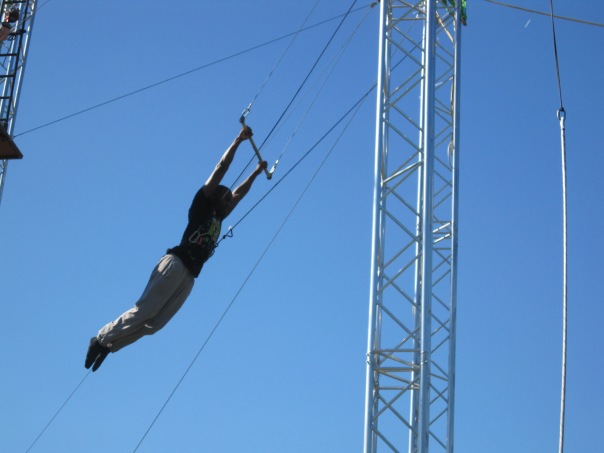 When we arrived at the site in Battersea Park (there is also a second summer site at Regent’s Park), we were greeted by the Gorilla Circus team and a class of students who were doing four week or intermediate courses. After signing the disclaimer – fingers crossed for no injuries! – we warmed up our muscles with some stretches ready for all the bending, stretching and flinging of limbs we would be doing high up in the air.

Unfortunately, I was chosen first so had to swing off a ground-level bar, put my legs over it and hang upside down hands-free – a basic swing. It was a strange sensation of the blood rushing to your head, but you soon get used to it. After we all tried out the ground level practice, it was time to try out the real thing.

Climbing the high ladder up to the small ledge at the side of the trapeze was quite nerve-wracking. It was only when the ladder got even narrower at the top and I glimpsed how far down it was, it suddenly hit me what I was doing. There was a safety harness attached to me the whole time and a net to catch me, so I had to reassure myself nothing could really go wrong. It took me a while to finally jump off the ledge and after the first initial second or two where I felt the urge to scream, I suddenly relaxed. I swung my legs over my head onto the bar and managed to hang upside down with my arms hanging down – without falling off! I have to admit I was in shock that I was actually doing it. After putting my legs down and putting my hands back on the bar, I then jumped off the ring onto the safety net, and managed a semi-gracious landing. 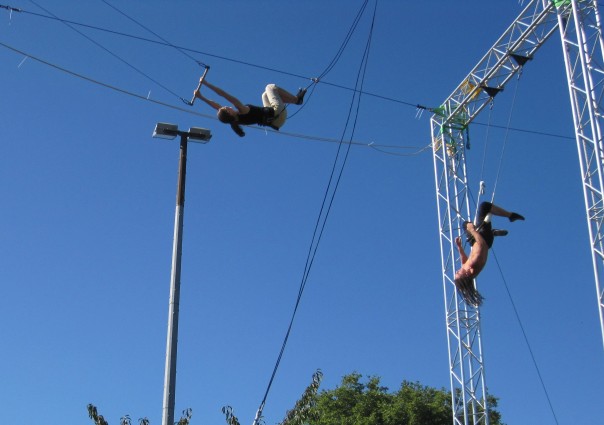 Getting ready for the catch

After three simple swings, it was on to the catch. As I was first, I didn’t really get to see anyone doing it – at least in the style we beginners were doing it – which made me rather anxious. I swung forward and put my legs on the bar and hang upside down, waiting for the professional to ‘catch’ me. Am happy to say, that unlike Carrie, who couldn’t bring herself to let go and do the catch in the episode, I managed to do it. The rush of successfully throwing myself off the swing and being caught by another person was amazing. I was on cloud nine.

After the catch, I tried two more swings to somersault off the bar, but for some reason, it didn’t quite happen for me. In fact, my sixth and final swing, I landed on my head. Perhaps I had used up all my concentration on the catch and I just couldn’t absorb any more information.

To anyone toying with the idea of trapeze classes, I can highly recommend them. The team of Gorilla Circus were professional, friendly and made you feel safe. At £25, I thought it was very good value for such a fun afternoon. 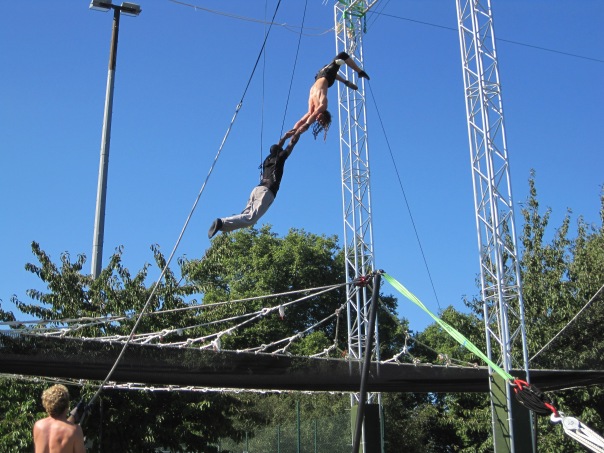 The main goal of the class! To perform a catch