The fascinating history of Blackfriars: Norman castles, a priory, theatres and Shakespeare’s home

Remains believed to be of the Blackfriars Priory in Ireland Yard

Blackfriars is an area by the southern fringes of the City of London, familiar to many City workers. Now dominated by office blocks, the district used to be a hub for religion and entertainment. Until the early 13th century, the area was home to Norman fortresses Mountfiquet Castle and the original Baynard’s Castle. Mountfiquet was likely named after the Baron of Mountfichet (of the Stansted Mountfichets in Essex), while Baynard’s was built by Ralph Baynard (a sheriff of Essex). Both castles were demolished by King John (1166-1216) in 1213 after their then-residents Robert Montfichet and Robert Fitzwalter took part in the barons’ revolt against the monarchy the previous year.

The name Blackfriars dates back to the 13th century when Dominican Friars established a priory on the site. The Friars first came to the capital in 1221 and established their first London monastery on the outskirts of the City near Lincoln’s Inn at Holborn. However, in 1276 they obtained permission from King Edward I (1239-1307) to move to the area we now know as Blackfriars. The King approved the levelling of the remains of Mountfiquet and Baynard Castle and the demolishing and rebuilding of the Roman City walls to incorporate their priory in 1282. The plot covered around 8 acres and incorporated the main church, a tower and five chapels (the Virgin chapel, a Lady chapel, St John the Baptist chapel, a pardon chapel and the Chapel of St Ann). The name Blackfriars started being used around 1317 to describe the Friars, who were recognised by their black cappas. The City also included Grey Friars (Franciscan), Austin Friars, Crutched Friars, Austin Friars, White Friars (Carmelites), and the Holy Trinity and St Helens Priory priories. In 1322, the Blackfriars was the scene of tragedy when a large number of impoverished Londoners were crushed to death in a rush to beg for food and money at the gates. END_OF_DOCUMENT_TOKEN_TO_BE_REPLACED

The story behind the red columns in the River Thames.

If you walk along the Thames Path, or perhaps cross the River Thames via foot or train on the two Blackfriars Bridges, you may have noticed these pieces of unusual river furniture. Running from north to south are pairs of red pillars, which used to support the original railway bridge before it was dismantled in the 1980s. Rather confusingly for Londoners, there were two Blackfriars railway bridges and various name changes between the current Blackfriars station and another station south of the Thames which no longer exists.

The Old Blackfriars Railway Bridge in 1897
By James Dredge, via Wikimedia Commons

The red pillars we see today are what remains of Old Blackfriars Railway Bridge, which was built in 1864 by engineer Joseph Cubitt (1811-1872) for the London, Chatham and Dover Railway (LC&DR). The bridge brought trains across the Thames between the original Blackfriars Bridge station (south of the Thames) and Ludgate Hill station (closed in 1929). The original bridge was four tracks wide and supported ornate abutments featuring the LC&DR’s insignia. The original Blackfriars Bridge station was located near the junction of Southwark Street and Blackfriars Road.

It wasn’t long before Old Blackfriars Railway Bridge was joined by its sister bridge, the St Paul’s Railway Bridge, which led into the newer St Paul’s train station on the north bank of the Thames, aka the current Blackfriars station. St Paul’s station and the new bridge opened in 1886, the latter designed by civil engineers Sir John Wolfe Barry (1836-1918) and Henry Marc Brunel (1842-1903). Wolfe Barry was the engineer of Tower Bridge and the son of architect Charles Barry, who famously redesigned the Houses of Parliament. Meanwhile, Brunel was the son of Isambard Kingdom Brunel, famous for the Thames Tunnel and Bristol’s Clifton Suspension Bridge, amongst many other landmarks.

The red pillars used to stand in rows of three, but only pairs are visible

The southern abutment and LC&DR insignia have been restored

When the new St Paul’s station opened, LC&DR decided to close Blackfriars Bridge to passengers, but kept the station open as a goods’ yard. It continued in that guise until 3 February 1964, before it was demolished four years later. The only sign of the station today is the cobbled entrance driveway behind an office block.

In 1985, it was decided the old Blackfriars Railway Bridge was too weak to support modern trains and it was dismantled. However, the red pillars and the southern abutment remained in situ. Originally the pillars were in rows of three, but the eastern columns were absorbed into the rebuilding of Blackfriars station on the younger bridge in 2011, so only pairs are visible to the public now. During the works, the LC&DR’s insignia was restored as a lasting reminder of a bridge and train company of yesteryear.

For the history of the Blackfriars area, click here. 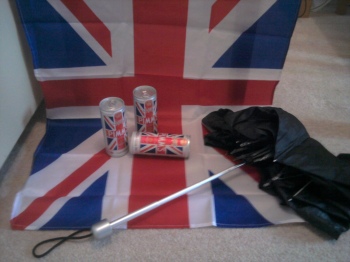 Ahead of the Queen Elizabeth II‘s Jubilee Weekend, I wrote a last-minute blog with ideas of where to celebrate it. But when it came for me to make a decision, I was torn for choice. As I was flying out to Italy on the Bank Holiday Monday morning for a last-minute holiday, I decided to hit the Thames to watch the Queen’s Jubilee Pageant.

As a South Londoner and having spent a lot of my childhood playing on the South Bank, I was drawn to trying to find a spot to watch the flotilla from that side of the river. We arrived at London Bridge station armed with umbrellas, camera, Union Jacks and some cans of Pimm’s Cups. The forecast was dim, but, like all Londoners, we are used to rain and pressed ahead with our plans to watch it al fresco. 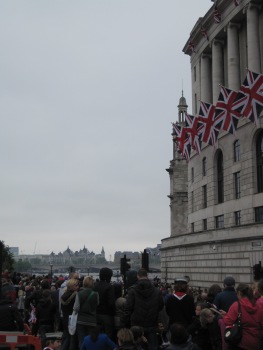 Grab any spot you can! People clambering for a view from outside Unilever House

Rather ignorantly, we were hoping the rain may have put off some people and arrived about 90 minutes ahead of the flotilla starting. As we walked past viewpoint after viewpoint – which were closed off by police due to crowd control – it soon started to look hopeless that we were going to see the flotilla at all. We got as far as Southwark Bridge (not very far at all, but took ages due to the sheer volume of people) and after being told that most bridges were being closed off (although my official flotilla map said otherwise…), I had the brainwave to walk to Borough tube and get the Underground ‘over’ the river since going by foot looked increasingly difficult.

After riding to Bank, we then headed down to Mansion House and kept looking for viewing areas along Lower Thames Street Embankment – still to no avail. Some people had stood on flights of stairs to get literally a 10ft by 10ft view through a small gap in the buildings. I was determined I wouldn’t be that desperate to put up with a view that poor. 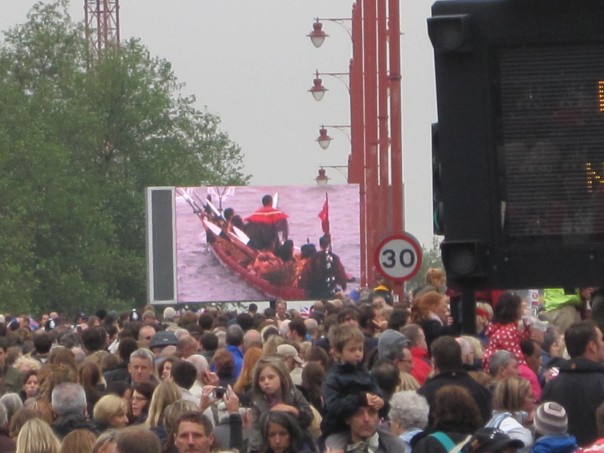 Hundreds stand on Blackfriars Bridge to watch the flotilla onscreen

Finally we reached Blackfriars Bridge about 90 minutes after setting off from London Bridge. Our timing was perfect because there just happened to be a few ‘viewing spots’ left on one of the flower beds on a traffic island in front of Unilever House. Now I’m not a vandle and like to respect my city, but needs must, so myself and my group climbed onto the bed – making sure we didn’t crush the plants in the process before anyone accuses me of vandalising them! Finally we could see the Thames – albeit over a sea of heads and flags – but we had a decent wide view on the river bend and Waterloo Bridge. There was also a large TV screen erected on the actual bridge so we could see the action on the Queen’s Barge too.

Closed roads meant everyone was free to walk wherever 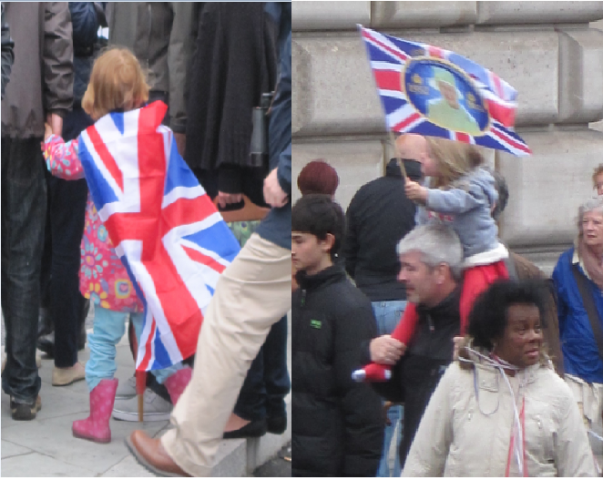 Kids get into the spirit for their first Jubilee

It might have been raining and it was a lot of standing around waiting, but the atmosphere was amazing. It was London in all its glory – looking around I could see a true representation of London (and the other Brits visiting from out of town). There were people from different classes, races and religion all coming together to celebrate the country and our Queen. I was feeling very patriotic and wore my Union Jack flag as a cape, a style choice many had made that day. One man had gone to extra patriotic lengths and painted the Union Jack on his face – a true ‘Diamond (Jubilee) Geezer’.

Finally when the Spirit Of Chartwell reached the bridge, there was a massive audio Mexican wave of cheers and whoops. The Queen’s barge was sailing particularly close to the north bank of the river, so I ended up climbing onto a pedestrian crossing light and balancing on the button box to get a better view! The barge’s passing under Blackfriars happened to coincide with the heaviest rain since we’d been outside, but the atmosphere was so jubilant, I was past caring. 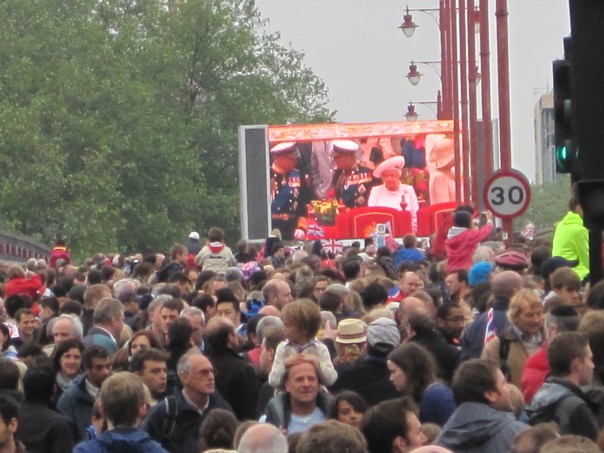 The lady of the hour

After finally seeing the Queen – albeit from a distance – and experiencing the Jubilee atmosphere, we were ready to hit home to watch the highlights from the comfort of the sofa – with a detour to a hot drinks establishment first.

Later reports estimated 1.2million had been by the river to watch the flotilla, which I could easily believe. Walking on some of the City Of London’s busiest roads, where there is usually vehicles, was a surreal experience. As dismal as the weather was, the sea of people wearing red, white and blue raised your spirits. 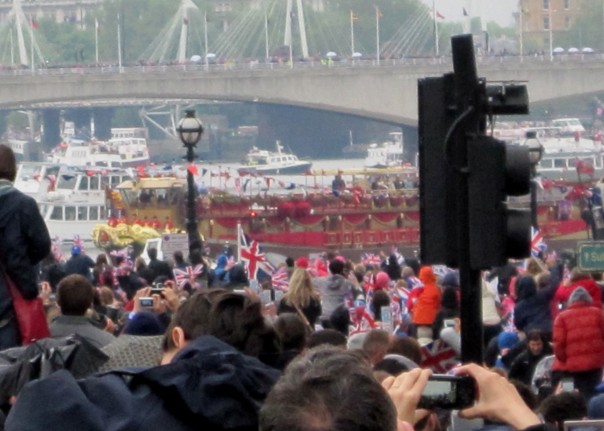 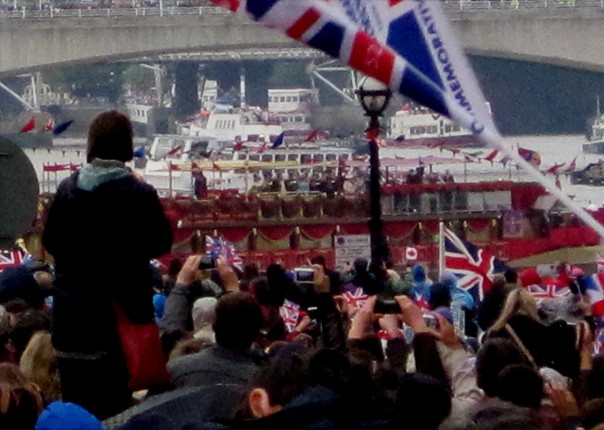 Spot the royals – Kate and Wills standing at the front

With the Queen being 86, its unlikely we will see her Platinum (70th) Jubilee, so I felt it was important to be a part of it and was proud to see London on the world stage – for the first of two times this year with the Olympics coming up. I was at the Thames for her Golden Jubilee, but don’t remember it being as big a spectacle as the Diamond. I’ve always associated myself more as a Londoner than a Brit or Englishwoman, but felt very proud to be British on that day.

Someone’s not feeling the Jubilee spirit… although his owner apparently is with their champers!