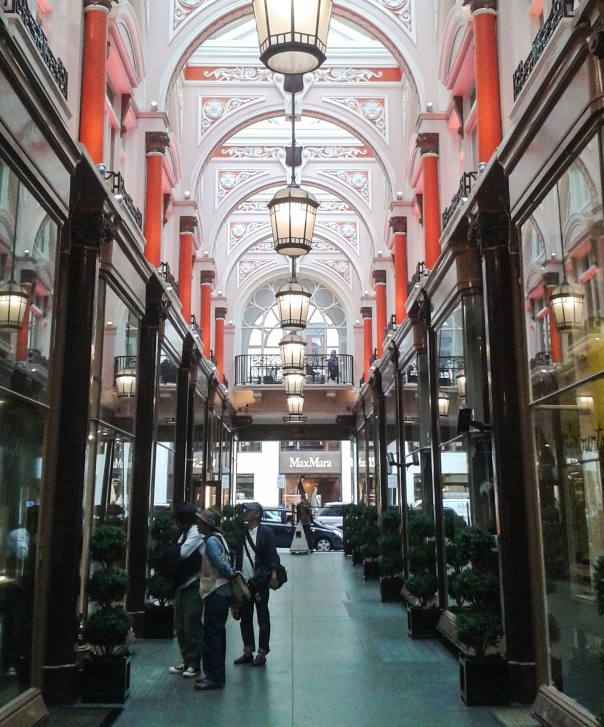 The Royal Arcade is the oldest surviving Victorian shopping arcade

Decades before the likes of Westfield and Brent Cross came to London, those who wanted to shop in comfort headed to one of the capital’s arcades. Like the mega malls of today, these arcades featured numerous shops under one roof, providing a sheltered retail experience whatever the weather. However, as well laid out as these modern fashion meccas are, they just can’t compare to the historic and upmarket designs of the late Georgian, Victorian and Edwardian periods. As part of Metro Girl’s series on the six historic arcades of Mayfair and St James, Part 3 will be focusing on the only surviving Victorian one – the Royal Arcade.

The Albemarle Street entrance to the Victorian arcade

London’s first ever shopping arcade – the Royal Opera Arcade in St James opened in 1818, with the Burlington Arcade in Mayfair following a year later. The Lowther Arcade was established in The Strand in 1830, but unlike its contemporaries, it didn’t survive far into the 20th century when it was demolished in 1904. After the Lowther opened, it was a 49 years before another arcade joined the capital’s retail industry.

The Royal Arcade was originally known as simply The Arcade and was first envisioned in 1864 as a link between Old Bond Street and Regent Street. However, these proposals were rejected due to the required volume of demolition of existing buildings. However, the plans were revised into its current design by Victorian architects Thomas Archer and Arthur Green (1847-1904). Archer & Green shared a practice for over 15 years before going their separate ways in 1889, during which they designed Whitehall Court, No.1 Cambridge Gate and the Hyde Park Hotel (now the Mandarin Oriental). Green was the father of Leslie Green (1875-1908), who designed many of London’s tube stations, including Oxford Circus, Camden Town, Covent Garden, Holborn and South Kensington. His stations are recognisable due to their ox blood red tiling on the buildings’ exteriors.

The Clarendon Hotel on Albemarle Street was demolished in 1870, freeing up the space for construction of The Arcade, which opened in 1879. In contrast to the older shopping arcades of the capital, The Royal Arcade is a lot more ornate in design. The two-storey arcade features curved bay windows on the ground floor with Ionic columns separating the 16 shops. The first floor features cast iron balconies overlooking the walkway. Looking up, the aisle is covered by a saddled glazed roof and arches with stucco detailing. Meanwhile, the orange and white façade of the building features reliefs symbolising abundance and commerce, caryatids (sculpted female figures taking the place of a column) and a portrait of Queen Victoria.

END_OF_DOCUMENT_TOKEN_TO_BE_REPLACED

Sat at the junction where Old and New Bond Street meet is a sculpture of a more recent piece of history compared to the many 18th and 19th century monuments dotted around Westminster. In contrast to the equestrian or military poses of many depictions of famous British leaders, royals and soldiers, this particular tribute is rather more informal.

Seated on a bench outside 16 New Bond Street is ‘Allies’, two bronzes statues of former US President Franklin D. Roosevelt (1882-1945) and British Prime Minister Winston Churchill (1874-1965) talking. The piece, created by sculptor Lawrence Holofcener, was a gift to the City of Westminster from the shops and businesses of the Bond Street Association. It was unveiled by the late Princess Margaret in May 1995 to commemorate 50 years of peace.