Kensington is world renowned for its royal palace

The London district of Kensington is world renowned for its palace, famous museums and having some of the most expensive property in the UK. From the grand museums of South Kensington to the greenery of Kensington Gardens, each district has its own different character. With its location and tube stations providing easy access to the capital’s attractions, Kensington is a popular base for many visitors.

While all three of the big museums are brilliant places to go, there’s a lot more to visit in Kensington. I’ve worked a large chunk of my career in Kensington and have stumbled upon the lesser-known attractions of the area when I’ve not been working. For this blog post, I spent the day exploring some of Kensington’s hidden gems. One particular destination off the beaten path is the stunning Leighton House Museum. Located near Holland Park and Kensington High Street, it was built in stages from 1866 to 1895 as a home and studio for painter Frederic, Lord Leighton (1830-1896). From the outside, it looks like a classical, red Victorian home. However, upon stepping inside, it’s like entering a Moorish palace. The main attraction is the beautiful Arab Hall, with its mosaics, Islamic tiles and golden dome. As well as its stunning interiors and expansive garden (by London standards at least!), there is also an extensive art collection, featuring paintings and sculptures by Leighton and his Victorian contemporaries. If you’re a fan of architecture and/or art – particularly pre-Raphaelite paintings – I recommend checking it out. You’re not allowed photos inside, although you can get some good shots in the lovely garden. 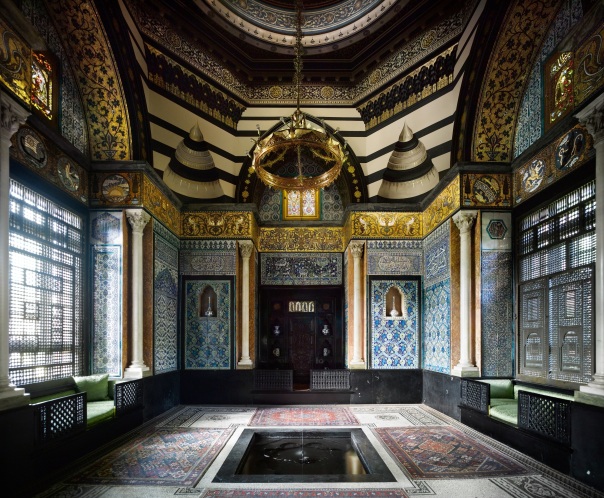 Designer dreaming at the Azzedine Alaïa exhibition at the Design Museum

A short walk away is the Design Museum on Kensington High Street. It was previously located in Bermondsey, but moved to the former Commonwealth Institute in Kensington in 2016. The spacious 1960s building is worth a visit in itself for architecture fans. It is home to a permanent free exhibition; ‘Designer, Maker, User’, as well as various changing exhibitions and events throughout the year. On my particular visit, I bought tickets for the Azzedine Alaïa: The Couturier exhibition, which is on until 7 October 2018. Curated with the designer shortly before his death last year, the exhibition features a collection of his fashions from the early 1980s to his last collection in 2017. The museum is an interesting space and the way the team have presented Alaia’s creations on transparent models on mirrored platforms was brilliant and really showcased the layers and angles of each design.

When you’re in this end of High Street Kensington, there’s a great little café down a quiet side street if you’re feeling peckish. Located on Phillimore Gardens with a small outdoor terrace is Café Phillies. It’s an independent café and wine bar, popular with locals and serves an all-day breakfast. It’s a cosy venue with contemporary art on the walls and friendly staff. I took advantage of the unlimited brunch hours and ordered an Eggs Benedict Royale for a late lunch. Served on toasted English muffins, there was a very generous serving of smoked salmon and the poached eggs were perfectly runny. A great spot for lunch or breakfast.

If you’re looking for some fresh air, consider walking down to Kensington Gardens. The large park covers 207 acres, with Kensington Palace located in the western end of the Gardens. Known for being the London home of the Duke and Duchess of Cambridge, parts of the palace are open to the public, including the King’s and Queen’s State Apartments. On this particular visit, I remained outside the palace walls and enjoyed the many free attractions of the gardens. As the palace was the last home to the late Diana, Princess of Wales, there are several memorials to the royal, including a children’s playground and a memorial walk. Throughout the Gardens are many buildings and sculptures to check out, including the 18th century Queen Caroline’s Temple, Henry Moore’s arch, the Elfin Oak, and the ornate Albert Memorial. The north side of the park features the 150-year-old Italian ornamental garden, built as a gift to Queen Victoria from her husband Prince Albert. Nearby is Queen Anne’s Alcove, a small structure built in 1705 and designed Sir Christopher Wren. Meanwhile, deeper in the Gardens is Queen Caroline’s Temple, a quaint 18th century summer house with views towards the Long Water.  END_OF_DOCUMENT_TOKEN_TO_BE_REPLACED 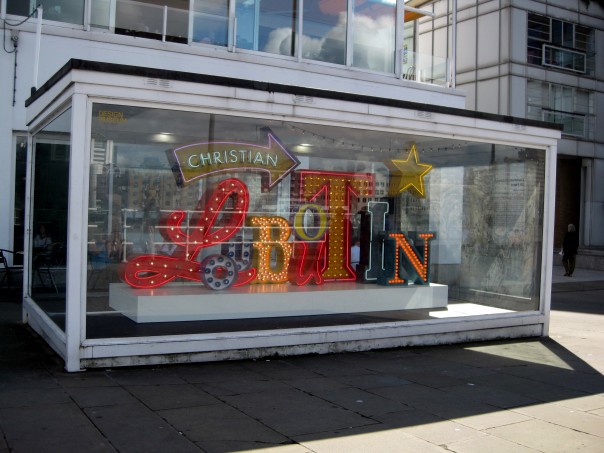 Christian Louboutin at the Design Museum

The starry entrance to the exhibition

The ultimate heel – the ballerina slipper with 8in heel

Like most women, I love shoes and have a range of heels, many impractical, which sadly spend more time in their shoe boxs than on my feet.

French designer Christian Louboutin has been creating shoes for 20 years, but it is really in the past few years, that his brand has really come to the fore and has been attracting more column inches and A-list feet than rivals Manolo Blahnik and Jimmy Choo.

With his current collection retailing between £375 and £3,795 on Net-A-Porter, I admit I’m not a regular customer of Louboutin’s gems, but have come to be a fan of his sleek curved footwear and that famous red sole.

So when Louboutin decided to do an exhibition of his designs at London’s Design Museum (1 May – 9 July 2012), I knew I had to go. Turns out I wasn’t the only one. Unsurprisingly, the exhibition has proved a huge draw for the Museum, located a stone’s throw from Tower Bridge on Shad Thames. The two-month exhibition actually broke records for the compact museum’s attendance, attracting on average 910 visitors a day.

The display rooms for the exhibition have been transformed into a dark, neon-lit pleasure palace of footwear with lots of lights and colours to stimulate the mind. The glamorous setting perfectly complemented some of the more theatrical heels on show. Dotted around the rooms were 200 shoes – predominantly heels, but also boots, trainers and loafers – with the year and season of their debut. Any fashionistas or celeb-watchers will indeed recognise many of the shoes from red carpet photos of the stars.

One of my favourite shoes on show were the ballet point heels, which Louboutin has described as ‘the ultimate heel’. The simple nude ballerina pump was transformed with a red sole and eight-inch heel – only the most experienced ballerinas would dare wear these! He said: ‘The heel which makes dancers closer than any other women to the sky, closer to heaven.’

As well as being a retrospective of Louboutin’s two decades of shoe-making, the exhibition also gives us a look at Louboutin the man, where he came from and what inspired him. Having started out his career at the Folies Bergère nightclub in Paris in the early ’80s, he used to draw shoes for the dancers, before starting an apprenticeship with Parisien footwear brand Charles Jourdan, before going on to work for Roger Vivier, his mentor.

On my Christmas list… Veneneuse pumps with 5in heel

Flamboyant: Let Me Tell You Ankle boots with 4.8in heel

Interestingly, Louboutin always designs his Autumn/Winter collection in a cold climate – often retiring to his château in rural France – but then jetting south to hot Egypt to create his Spring/Summer collection. He says one of the most important things to him when designing shoes is that the lines and curves are correct. Louboutin has said of the exhibition: ‘It’s been a real pleasure to see a lot of my “babies” featured all together for the first time. It’s not only an entire collection of shoes that I saw there but for me a huge collection of souvenirs, precious moments, and very rarely sorrows.’

Although he admits his shoes aren’t always comfortable, many requiring a taxi or limousine ride directly to the door of wherever the wearer is going, his Fetish collection goes to extremes. It is more art than anything else. A separate dark room features Louboutin’s most eccentric creations yet – a small collection of heels which would require the wearer to be in a lot of discomfort to wear them or unable to stand. The shoes, protected under bell jars, are accompanied by striking photography of nude models wearing them, taken by acclaimed auteur David Lynch.

The centrepiece of the exhibition is the 3D hologram performance by burlesque artiste Dita Von Teese, in a pair of Louboutins of course. Visitors to the museum come to a standstill as ‘Dita’ showcases her moves in front of a centrepiece of the most glamorous showgirl heels from Louboutin’s archives.

Overall, the vivid and colourful exhibition is a feast for the eyes for any woman – or man- with a shoe fetish… or just a simple appreciation for beauty. Now I’m off to start up a Louboutin savings account so I can expand my footwear collection…

N.B.: As photography wasn’t allowed in the actual exhibition (the photos in this blog were taken in the stairwell leading up to it), here’s a video of the exhibition by the Design Museum… 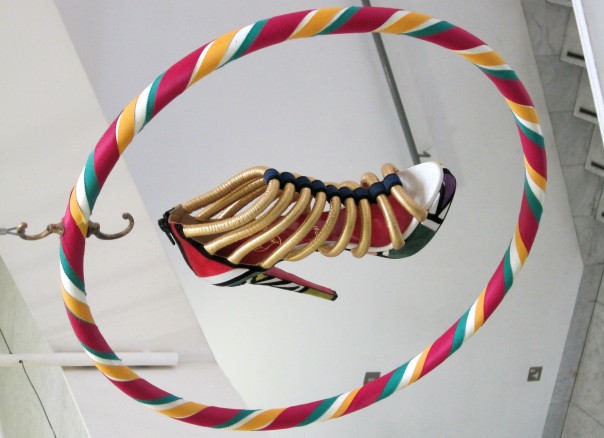