A visit to the Colour Palace – a temporary structure for summer 2019 in the grounds of Dulwich Picture Gallery in south London.

Discover the history and sights of Dulwich Village with this special walk.

Today, there is only a few ‘villages’ left in London. Back in the Georgian era and beyond, London as a city was significantly smaller and surrounded by many country villages. As London expanded during the Industrial Revolution, many of these districts got swallowed up by the growing capital. However, there are a few areas, such as Dulwich, Wimbledon and Highgate, left today which have retained their village charm.

One such place is Dulwich Village in south London, which dates back to at least the 10th century. I’ve lived nearby most of my life and am really fond of the village. Of course, the property prices are ridiculous and unattainable for most of us, but it’s a lovely place to visit, eat and drink in. The Dulwich Society have retained a tight control over planning so the likes of Tesco superstores and flashy developers haven’t ruined the village’s Georgian feel. Located just five miles from the centre of London, it’s surprisingly close to the capital and easy to get to with regular trains from London Bridge and London Victoria.

If you’ve ever fancied exploring Dulwich Village, why not try out my self-guided history walking tour with Routey.net. The company is a free online platform offering walking tours created by members of the travel community. My walking tour covers less than 2 miles and includes 18 stops. It can take a minimum of 90 minutes to up to 5 hours if you choose to stop at the Crown & Greyhound pub for lunch or dinner and visit an exhibition at the Dulwich Picture Gallery.

This year marks the 200th anniversary of the opening of Dulwich Picture Gallery, the oldest public art gallery in the UK. To mark the occasion, the Gallery hosted a competition to rising architects to design a temporary summer pavilion for the grounds. If_Do won the competition with their airy wood and mesh creation, which will remain outside the Gallery all summer. Throughout June and July, the gallery are hosting late night openings every Friday, featuring special themed events both in and outside the gallery.

Earlier this month, I visited the Gallery for their late night opening, entitled ‘Baroque Mash Up’. The DPG is renowned for its collection of French, Spanish and Italian Baroque paintings, so the night took inspiration from this particular genre of art. Entering the gallery grounds, our eyes were immediately drawn to the main attraction – the Pavilion. Within the structure was a pop-up bar from the Camberwell Arms serving cocktails, wine and snacks, so our first priority was to order a drink and soak up the atmosphere. There was plenty of seating both around the Pavilion and the manicured lawns so a lovely space to relax on a warm summer evening. The gallery’s café is also open late serving food if you’re in the mood for something more substantial. While sipping our cocktails, we were entertained by musicians Benjamin Tassie and Liam Byrne playing their original, experimental music, which really complemented the history of the gallery and the social setting. Also in the Pavilion were guests taking part in a cross-stitch workshop, using patterns from some of the Gallery’s works.

During Pavilion Lates, there is free access to the Gallery, which normally costs to enter. We joined one of the hourly tours of the gallery, billed as an ‘alternative tour’. Our guide showed us some popular paintings in the gallery and gave us a list of facts about the subject or the painter – but added an untrue ‘fact’ which we had to guess. As well as injecting a bit of fun into a typically straight-laced activity, it also showcased some surprising facts about artists and the art world I had never heard before. Following the tour, you were free to explore the collection or take part in the collage making workshop.

Overall, it was a lovely, interesting evening – particularly when the weather is good so you can really make the most of the Pavilion and its setting. I’ll definitely be returning to another Pavilion Lates this summer.

Andy Warhol is usually associated with New York City – having spent nearly two-thirds of his life in the Big Apple after being raised in Pittsburgh. His art work is scattered through some of the world’s biggest art galleries and homes of the rich and famous. So to find some of the iconic artist’s works in a leafy London suburb is quite a surprise.

For three months, an exhibition of Andy Warhol Portfolios is on display at Dulwich Picture Gallery in Dulwich Village, South London. Located just 11 minutes train journey from central London, the Gallery is the main attraction which draws outsiders to the historic village, which still has its original 18th and 19th century houses and shops.

The exhibition runs until 16 September 2012

Dulwich Picture Gallery is England’s first purpose-built gallery and was designed by Regency architect Sir John Soane. It contains mostly European old masters from the 17th and 18th century as well as an ever-changing exhibition rooms.

Andy Warhol: The Portfolios is on show from now until 16 September 2012. The exhibition includes some of Warhol’s most iconic prints – including the Campbell Soup cans and one of the Marilyn Monroe silkscreens in salmon – and lesser known creations from the latter years of his life. While many of his celebrity-orientated images focus on just the face and the identical print in different colours, Warhol’s 1978 prints of boxer Muhammad Ali feature different angles of his face and his powerful fists.

While many associate Warhol with his prints of celebrities, the exhibition features some of his still lifes. I particularly liked the shaded colours of his Grapes (1979), which saw Warhol using diamond dust in his prints for the first time. His Vesuvius (1985) prints were striking – the different coloured prints depicting very different depictions to Southern Italy’s famous volcano. 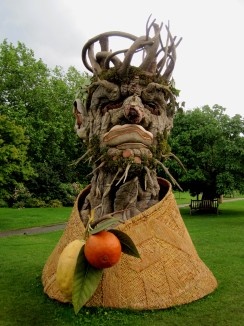 No wonder he’s miserable… he is Winter after all!

One of my favourite bits of the collection was Myths (1981) in the fourth and final room of the exhibition. Between Myths and Endangered Species, they were two of the most popular series produced by the artist. He used a combination of stock images, his own photographs and also got actress Margaret Hamilton to reprise her costume as the Wicked Witch of The West in Wizard Of Oz.

Aside from Warhol’s exhibition, there is also the permanent collection, a great cafe and gift shop and an outdoor exhibition of Philip Haas’ Four Seasons sculpture. Or perhaps meander into Dulwich Village or Park across the road.

Haas’ amazing Four Seasons collection depicts Spring, Summer, Autumn and Winter in 15ft high sculptures in the garden, which is free entry unlike the Warhol exhibition. The American artist was inspired by Giuseppe Arcimboldo’s Renaissance paintings of the four seasons. While Winter looked understandably miserable – who likes the cold – the Spring was full of hope and joy for warm weather.

Due to copyright issues, I am unable to post images of the Warhol exhibition, but the YouTube video below will give you a sneak peek at what to expect.

Full of the joys of… Spring