The history of the Royal Hospital Chelsea and the Chelsea Pensioners and how you can visit. 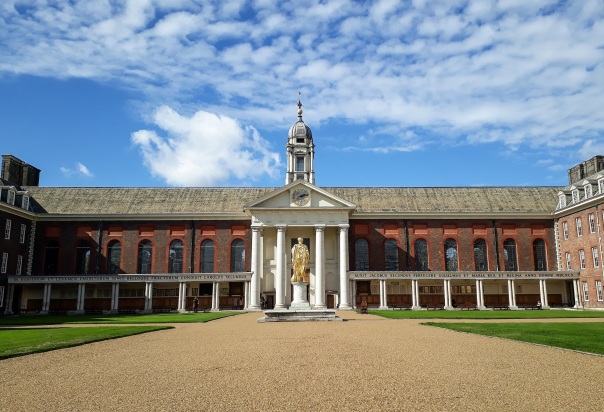 The exterior of the chapel of Royal Hospital Chelsea

As the host venue of the Chelsea Flower Show, the Royal Hospital Chelsea sees over 157,000 visitors pass through its gates every May. However, these horticulture lovers only get to see the outside of this historic venue. Known as the home of the ‘Chelsea Pensioners’, parts of the Royal Hospital are open to visitors, including during Open House London. 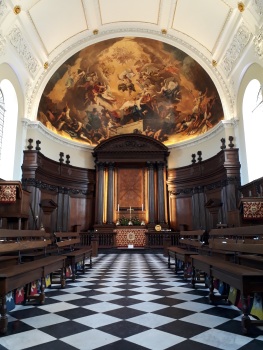 The Royal Hospital Chelsea is a retirement and nursing home for around 300 veterans of the British Army. Until the 17th century, there was no state provision to look after retired or injured soldiers. However, King Charles II (1630-1685) recognised these veterans needed care and founded the Royal Hospital Chelsea in 1682. He chose to establish it on a 66-acre site in Chelsea, which housed a theological college named ‘Chelsey College’, founded 73 years earlier by his grandfather James I of England (1566-1625). Charles II and his royal administrator Sir Stephen Fox (1627-1716) commissioned architect Sir Christopher Wren (1632-1723) to design and oversee the building’s construction.

Wren designed the Great Hall and Chapel. The 42ft high chapel was completed in 1687 and was consecrated in August 1691. The chapel’s interior features a painting of the Resurrection of Christ by Italian painter Sebastiano Ricci (1659-1734) and his nephew Marco Ricci (1676–1730), which was added in 1710-15 during Queen Anne’s (1665-1714) reign. Just to the south-west of the Chapel was the Great Hall, which was originally intended as a dining hall. It featured 16 long tables with a large mural of King Charles II on horseback being crowned by Victory. Meanwhile, outside in the central court, the King was honoured again with a 7ft 6in statue in copper alloy by Grinling Gibbons (1648-1721).

END_OF_DOCUMENT_TOKEN_TO_BE_REPLACED

The Old Curiosity Shop: A little piece of 16th century London with a literary link

A historic shop proclaims to have inspired the classic novel, but what’s the real story?

The Old Curiosity Shop in Holborn

Down a little unassuming side street in the back roads of Holborn is historic shop. Just two storeys high, it is dwarfed by the modernity surrounding it. At first glance, fans of Charles Dickens may be thrilled to see the author’s name emblazoned across the upper storey as it claims to be his Old Curiosity Shop from the Victorian novel of the same name. Perhaps on close inspection the truth isn’t so clear-cut.

Built in 1567, the building is believed to be the oldest surviving shop in London. It was constructed using wood from old ships, with a tiled, hipped roof. The ground floor windows today still feature 17th or early 18th century frames, with 19th century glazing. It managed to survive the Great Fire of London in 1666 as the fire died out before it reached the Holborn area. At one point the building was used as a dairy on an estate owned by Louise de Kérouaille, Duchess of Portsmouth (1649-1734) – one of the mistresses of King Charles II (1630-1685) and mother to one of his illegitimate children. The estate was a gift from Charles and the road takes its name from the Duchess.

Charles Dickens’ (1812-1870) originally serialised The Old Curiosity Shop in his serial Master Humphrey’s Clock from 1840-1841, before publishing it as a complete book in 1841. The novel told the story of orphan ‘Little’ Nell Trent and her grandfather, who live at The Old Curiosity Shop. The book was incredibly popular with the Victorian public, with even the Queen remarking it was ‘cleverly written’.

The idea that Dickens was inspired by this very shop in Holborn is untrue – although he lived for many years in the area and knew of the building. In The Old Curiosity Shop, the author himself writes “the old house had been long ago pulled down, and a fine broad road was in its place”. The actual shop which inspired Dickens’ tale is widely believed to be either 10 Orange Street (behind the National Gallery) or 24 Fetter Lane (off Fleet Street).

Nearly 30 years after book was published, the shop’s proprietor decided to cash in on Dickens’ popularity. A bookbinder and bookseller named Tesseyman (d.1877) renamed it The Old Curiosity Shop, proudly declaring it was the very one ‘immortalised by Charles Dickens’. It’s been claimed Tesseyman was given the idea by Dickens’ illustrator Clayton Kyd Clarke (1857-1937) following the author’s death in 1870. Tesseyman’s brother confirmed to the Pall Mall Gazette in 1884 that the Curiosity Shop sign had been painted on the façade “for purely business purposes, as likely to attract custom to his shop, he being a dealer in books, paintings, old china, and so on”. According to the Gazette, Tesseyman ran the shop from 1868-1877 and was known as ‘Thackeray’s bookbinder’ and was acquainted with William Makepeace Thackeray, Douglas William Jerrold and Dickens, the latter he referred to as “lightning”. (See a watercolour of the shop during Tesseyman’s time).

From the 1880s until 1911, 13-14 Portsmouth Street was home to Horace Poole’s waste paper and jobbing stationery business. It was then taken over in the 1910s by stationers Gill and Durrant. In January 1925, it fortunately escaped destruction by a fire on the first floor, which made the Westminster Gazette headlines. By 1937, it appeared to be split into two businesses; The Society Tailors and Souvenir and Gifts with projecting signage and lamps erected on the first floor façade. The various businesses which resided at the address all preserved the Dickens’ signage, which surely ensured its survival, despite being untrue. The nearby Clare Market slums and shops were demolished in 1905 to create Aldwych and Kingsway, including the tramway subway. The Clare Market area today is mostly occupied by the London School of Economics (LSE).

At some point before 1950, the building became an antiques store, eventually closing in the 1970s. When it shut its doors, receipts and documents dating back as far as the 1920s were found. The building was Grade II listed by Historic England in 1958. Since the 1990s, the shop has been selling shoes by Japanese designer Daita Kimura. Why not pop in to see the low ceiling beams and winding staircases?

Little Dorrit, Dickens and debt | The remains of Marshalsea prison in Borough

The history of the gate leading to Paternoster Square, which previously stood in Fleet Street.

Like many ancient cities, London was surrounded by a wall, with visitors and returning residents gaining entrance through a variety of gates. There have been numerous gates – or archways – into the City of London over the past two millennia, but today, only one remains. Temple Bar is currently located just north of St Paul’s Cathedral – half a mile east from where it originally stood on Fleet Street until the late 19th century. While the current structure is a 17th century design by Sir Christopher Wren (1632-1723), it replaced a previous wooden structure and before that a chain and posts. Many of London’s gates – Aldgate, Bishopsgate, Newgate (which no longer exist) – date back to Roman times. However, Temple Bar dates back to the Middle Ages when the City of London authority erected a passageway to control traffic between the juxtaposing cities of London and Westminster. The name Temple refers to the area south of Fleet Street known for its law courts – which now features Temple underground station on the Circle and District line. The Bar at Temple was first mentioned in 1293, which historians believe was a simply a chain between two posts. However, over the years, many different structures were erected on the site. In the late Middle Ages, a timber arch stood on the spot and amazingly avoided being destroyed by the Great Fire of London in September 1666. 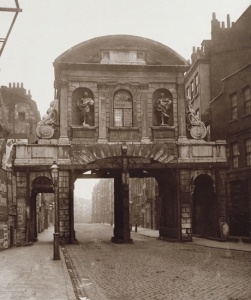 Following the Great Fire, the City was due a big makeover – building by necessity and also an attempt to build a more flowing, ordered space – 17th century town planning. The wooden Temple Bar was falling into disrepair so Wren was given the task of building a new gate, along with all the other structures he was designing and overseeing in the City. King Charles II (1630-1685) commissioned Wren to create the new Temple Bar. Made from Portland Stone, it took three years to build and was completed in 1672. The gate features a wide arch for road traffic and two smaller arches for pedestrians to pass through. In alcoves on each side of the Temple were statues of Charles I (1600-1649), Charles II, James I (1566-1625) and Anne of Denmark (1574-1619), which were carved by John Bushnell (d.1701). In the 18th century, the heads of traitors were put on spikes above the roof of the arch to serve as a warning to those thinking about breaking the City’s laws.

Despite the respect of such a historic monument, the City of London Corporation wanted to widen the road and it was decided to dismantle it carefully stone-by-stone in January 1878. After its 2,700 stones were put in storage, two years later the arch was bought by brewer, Sir Henry Bruce Meux (1856-1900) for his wife Lady Meux (1847-1910), to be reconstructed at their Hertfordshire estate Theobalds Park. 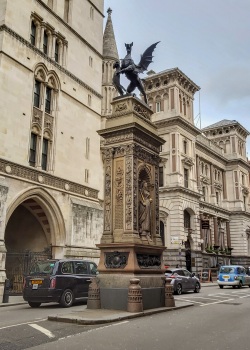 So for 123 years, Temple Bar stood in a clearing in a wood in Cheshunt. It had deteriorated and suffered vandalism over the years. The arch was bought by the Temple Bar Trust (founded by Sir Hugh Wontner in 1976) in 1984 with the hope of restoring it and bringing it back to the Square Mile. Finally, on 10 November 2004, the bright, shiny Temple Bar was completed and open to the public, now situated at the entrance to Paternoster Square by St Paul’s Cathedral. The gates of the arch, weighing just over 1.2 tons each, were opened by the Lord Mayor at the time and the 14 stonemasons who had worked on the rebuilding Temple Bar. Meanwhile, on its previous site where Fleet Street meets the Strand (in the City of Westminster) outside the Royal Courts of Justice, there now stands a marker – a neo Renaissance pedestal by Horace Jones featuring Charles Bell Birch’s sculpture of a dragon – the symbol for the City of London. The pedestal, which was unveiled in 1880) features likenesses of Queen Victoria and Edward VIII (the then-Prince of Wales), who were the last royals to pass through Wren’s gate. 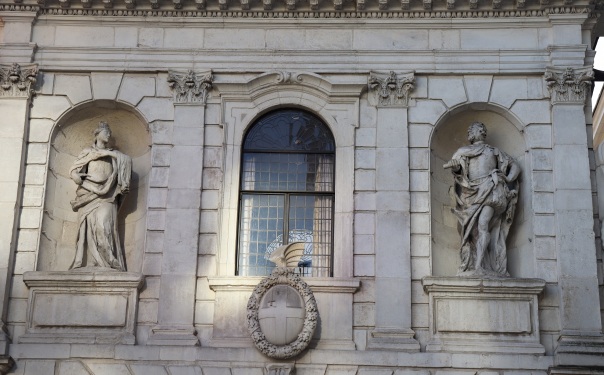 For the history of the Temple area of London – where the bar originally stood – read about Middle Temple Hall.