Leadenhall Market is one of London’s oldest markets, dating back further than the Victorian building you see today. 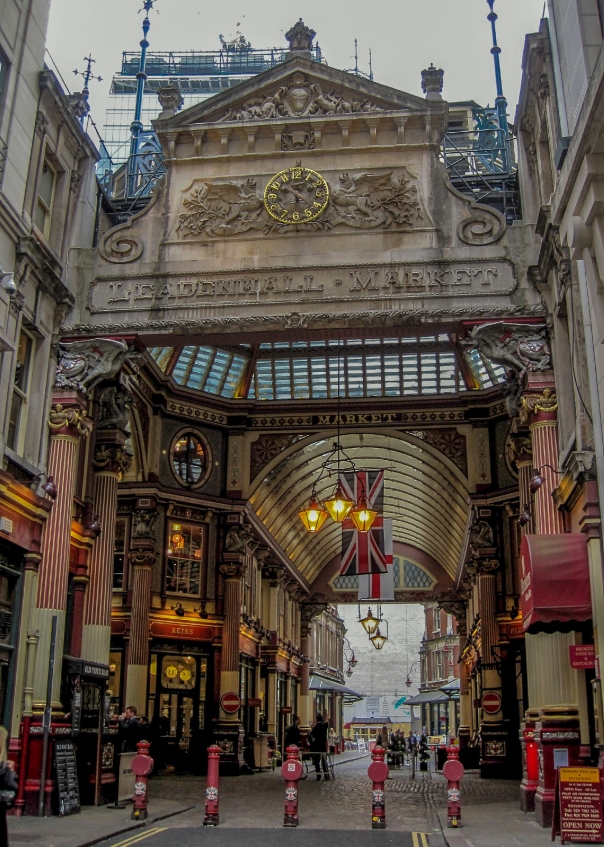 While the market dates back seven centuries, the site has actually been one of the city’s commercial hubs since the Roman invasion, when it was the location of the Basilica and Forum. Originally built in 70AD, it was expanded in 120AD, covering 2 hectares. The forum was a large open-air square and became a popular meeting place, with market stalls erected within the walls. However, the buildings were destroyed by Rome in 300AD as punishment for London supporting Carausius (d.293AD), who declared himself Emperor of Britain to the chagrin of Rome. It wasn’t until the early 5th century that the Romans finally left and Britain was independent from Rome.

In the early 14th century, the Manor of Leadenhall was owned by Sir Hugh Neville. Originally the local area was a meeting place for poulterers, then cheesemongers from 1397. The market sprung up in a series of courts beside Nevill House – known for its lead roof – on Leadenhall Street.

In 1411, the Corporation of London acquired the freehold of the land as a gift from former Mayor Richard ‘Dick’ Whittington (1354–1423). After the manor house was destroyed in a fire, it was replaced by a public granary, chapel and school as a gift to the public from Mayor at the time, Simon Eyre, Meanwhile, the market was expanded with traders selling poultry, grain, eggs, butter, cheese and herbs. Around this time, Leadenhall was considered the most important market in London and became quite the tourist attraction, with visitors coming to marvel over the bustling trade within the stalls. Over the 15th and 16th century, the market also offered wool, leather and cutlery for sale. The market was mentioned in Samuel Pepys’ diary in 1663 when he bought a leg of beef for six pence.

When the Great Fire ravaged London in 1666, the stone of Leadenhall Market actually prevented the flames from spreading north-east and escaped largely unscathed in comparison to most of the City. Leadenhall was subsequently rebuilt as a covered stone market with the stalls divided into sections; the Beef Market, The Green Yard and Herb Market. The Green Yard was listed as having 140 butchers stalls at one point, with fishmongers in the middle. END_OF_DOCUMENT_TOKEN_TO_BE_REPLACED

London is full of monuments and sculptures, often from a bygone era. So it is always great to see current day and contemporary artists represented across the capital. For the past four years, the City of London has brought art out of the galleries and into the streets as part of the Sculpture in The City exhibition. The current run originally featured 14 artworks on display in the City, in locations such as 30 St Mary Axe (The Gherkin) and Lime Street. 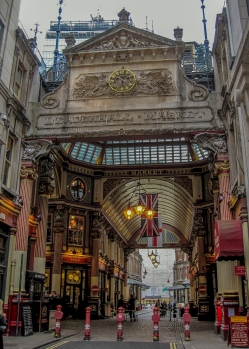 False Ceiling is on show at Leadenhall Market

One such piece from the 2014-2015 exhibition is False Ceiling by artist Richard Wentworth. Located in one of the walkways in Leadenhall Market, the art installation comprises of a flock of books hanging from the ceiling. Originally dating from 1995, this piece has previously been shown at the Lisson Gallery. The artist said he was inspired by the huge variety and volume of books which would turn up in flea markets during the early 1990s when he lived in Berlin.

On the day in question I went to see it, the weather was dreadful with wind and rain aplenty. Huge gusts sweeping through a rather empty Leadenhall Market on a Sunday meant the books were swaying quite vigorously in the wind. It took a while to get a decent photo because there was so much movement, but I’m glad I got to see it before it goes. Unsurprisingly, it’s become quite the popular subject for Instagrammers.

To read about the history of Leadenhall Market, click here.

Tags: City of London, Leadenhall Market, Sculpture In The City