The historic Covent Garden Market building has been lit up in neon until 10 October 2021.

The light installation by Chila Kumari Singh Burman is on display until the end of February 2021.

On the façade of the Tate Britain this winter is something a bit different from the typical festive lights. The front steps and portico of the neo-classical building have been lit up with a striking art installation. ‘Remembering a Brave New World’ by Chila Kumari Singh Burman was unveiled in November 2020 to coincide with Diwali, the festival of light. The collection of neon text and imagery is inspired by Hindu mythology, Bollywood, radical feminism, political activism and Burman’s childhood memories. Among the symbols and shapes on display include Hindu deities Lakshmi, Ganesh, Jhansi, and Kali. The pediment is lit up with inspirational and positive words, including love, shine, light, aim, dream and truth, while an ice cream van is perched on the steps.

Wembley Park are hosting a collection of light installations from November 2020. 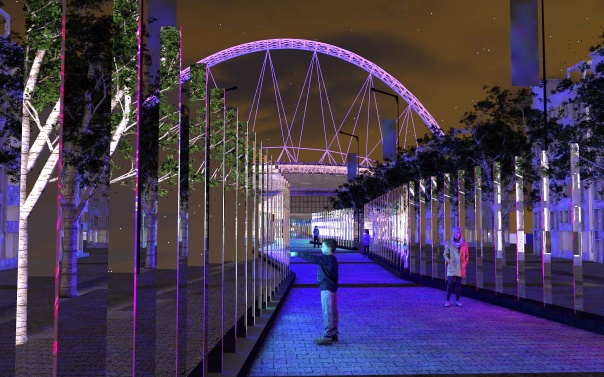 UPDATE: Winterfest and the ‘Reflections of the Future’ installation has been postponed until November 2021 due to the latest Covid-19 lockdown. However, the LED Christmas tree and other illuminations and digital artworks will still be on display.

As the pandemic continues to change our lives, it will undoubtedly be a different winter this year. With indoor and large activities restricted, we are looking to the great outdoors for our entertainment. One such alfresco event set to light up the dark wintry nights is Winterfest 2020.

Following the inaugural event in 2019, the free, immersive light festival is returning to Wembley Park on 26 November 2020. The theme for this year is ‘United in Light’ and hopes to bring joy to the local community and visitors over the festive period.

Among the pieces on show will be the new ‘Reflections of the Future’, a 100 metre long corridor of lights and mirrors, which alters perception of distance and space. The tallest LED Christmas tree in London returns following last year, adorned with a new digital art commission. The walk-through tree stands tall at 25 metres and features 100,000 LED light display. Along with other light installations, there will also be an outdoor photography exhibition in Arena Square during December.

Gods Own Junkyard | A trip to Walthamstow’s neon wonderland

Enchanted Eltham: A magical sound and light show at the historic Eltham Palace

Find out what’s on in London in November 2020 here.

Winter Lights festival 2019: Ghost whales, mazes and trees as Canary Wharf is lit up in neon

A look at this year’s Winter Lights Festival in Canary Wharf. Brightening up these dull and dark winter nights this month is the return of the Winter Lights festival. From 15 – 26 January 2019, over 21 light installations and interactive neon art have been dotted around the Canary Wharf estate. This year marks the […]

Walking in a Christmas wonderland: Photos of London’s 2018 festive lights and decorations

If Christmas didn’t take place in December, it would be a pretty dull month. Although we’re adjusting to the change in temperature and the dark nights, the festive season means the city is transformed into an extravaganza of neon, glitter and lights. I always love checking out the capital’s Christmas lights. When I was a […] 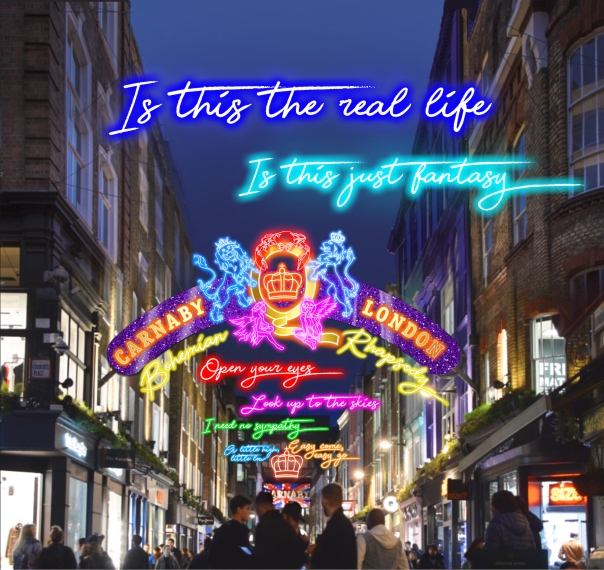 Bohemian Rhapsody is one of the mostly highly anticipated films this year. Named after the iconic hit single, the movie tells the story of Freddie Mercury and the band Queen in the lead up to Live Aid in 1985. Ahead of its release, the Carnaby district of London has teamed up with 20th Century Fox to create an immersive exhibition and light installation inspired by the rock legends.

For the art installation, fans of the band will see Freddie’s lyrics for one of the greatest rock songs of all time shining brightly over the pedestrianised shopping hub. Giant neon words will bring Queen’s 1975 song to life, including the opening: ‘Is this the real life? Is this just fantasy?’, along with the iconic ‘Galileo’ and ‘Figaro’. The Queen crest – designed by Mercury – will also appear on Carnaby’s famous arches.

Meanwhile, a pop-up shop and exhibition will open on 18 October so fans can get even closer to the rock gods. There will be a showcase of photographs, prints, footage and costumes from the band. Official film merchandise and Queen-inspired products will also be available to buy. Visitors can also pose for a selfie with the official Madame Tussaud’s Freddie waxwork. Meanwhile, the shops, bars and restaurants of Carnaby will also be joining in with Queen inspired products and menus.

The light display, shop and exhibition are launching to coincide with the release of the Bohemian Rhapsody movie on 24 October. It stars Rami Malek as Freddie, Ben Hardy as Roger Taylor, Gwilym Lee as Brian May and Joe Mazzello as John Deacon. 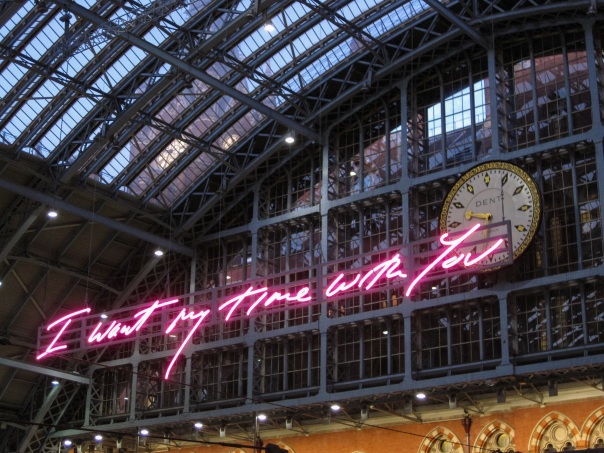 It’s been a while since my last ‘Photo Friday’ post… admittedly the least time-consuming and the easier posts to write. This isn’t the first time St Pancras has been the focus of a such a post either. This week, I finally got to have a closer look at Tracey Emin’s new-ish art at St Pancras International station, which was unveiled in April 2018. Suspended from the famous Barlow trainshed roof, are the words ‘I Want My Time With You’ in pink lights (LED, not neon due to health and safety). Emin said the message is a love letter to Europe ahead of impending Brexit, which has divided the UK. While art critics have been non-plussed, I like the message and am a fan of neon-esque writing in general so it’s a hit with me. I also didn’t realise until I saw my photos on my laptop that you can see the iconic clocktower of St Pancras peeking through the glass roof.

To find out about the nearby Sir John Betjeman sculpture, click here.

Lumiere London 2018: The capital becomes a gallery of neon

Last night saw the return of Lumiere London. Spanning four days, over 50 artworks across six areas of the capital will be transforming landmarks and buildings. A host of local and international artists have created neon projections, installations and illuminations. Lumiere is back in the capital two years after the huge success of its debut […]

Gods Own Junkyard | A trip to Walthamstow’s neon wonderland

The late Chris Bracey’s neon gallery and shop is an Instagrammers’ paradise. Neon art is hot right now, with restaurants, bars and shops vying for bright lights to make their businesses stand out and be Instagrammable. One particular part of the capital famous for its neon signs is Soho, particularly the night clubs and adult […]

Many of us (myself included) lament winter for the long dark nights and overall gloominess. However, it’s these conditions that can make decorative lighting all the more alluring. After the Christmas decorations come down in early January, it can feel a bit drab. However, for two weeks in January, Canary Wharf gave us a bit of neon love […]