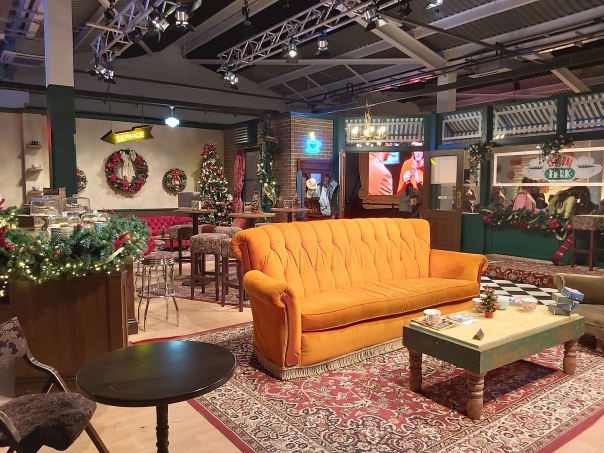 Sit on the iconic orange sofa in Central Perk at FriendsFestive

You may have noticed in the media in recent months that 2019 marks the 25th anniversary of the TV show Friends. Although I was an original fan back in the 1990s, a whole new younger audience have come to love the show thanks to Netflix and Comedy Central. This Christmas season, the sell-out FriendsFest is back in London with a festive twist. Hosted by ComedyCentral UK, FriendsFestive gives fans of the show a chance to hang out on the sets, see authentic props and costumers from the show, and pose for photos and videos as you recreate memorable scenes. 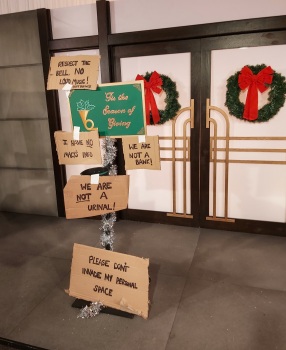 I had previously visited the first FriendsFest back in 2015 and was fortunate enough to meet actor James Michael Tyler, who played Gunther. The original FriendsFest was a much smaller affair with only one proper set and I had seen through friends’ social media photos that subsequent Friendsfests had got bigger and better. FriendsFestive differs from the others because it offers a twist on the theme with many references from Thanksgiving and Christmas episodes, as well as a lot more interactive spaces and photo opportunities.

The guided tour started in Monica and Rachel’s apartment living-kitchen area, which had been suitably decked out for Christmas. The kitchen had familiar items fans from the show would recognise such as Phoebe’s skull full of liquorice, Rachel’s disastrous trifle-mince pie hybrid and a cardboard box full of Monica’s broken posh plates. Our group were given opportunity to explore the set and pose for photographs, before clearing the room so an empty photo could be taken. Helpfully, this was factored in for every room so you could get some decent shots without random people ruining your shot. Next, we progressed to the hallway, complete with candy basket hanging on Monica’s door. Moving on to Chandler and Joey’s apartment, it had cute touches like Hugsie the penguin on the sofa, and the drum kit Phoebe bought Joey to try and force Rachel to move out. Finally, it was the Central Perk set, with the iconic orange sofa, the neon service sign and Phoebe’s guitar on stage. END_OF_DOCUMENT_TOKEN_TO_BE_REPLACED

Taking place at the climax of London Beer Week, CBR London 2016 is a new and improved version of the Craft Beer Rising festival. A two-day extravaganza at the Old Truman Brewery will feature 150 brewers showcasing over 600 different beer and ciders to sample. As well as plenty of drinking, there will be street food, live music and DJs.

This year’s festival will be CBR’s largest ever and include a diverse mix of breweries from the UK and abroad. Featuring UK brands such as Beavertown, Thornbridge, and Harviestoun, to international talent from Little Bichos, Lagunitas, Mikkheller, and Bronx Brewery. They’ll be ample opportunity to try your favourite craft beers as well as new product launches and recipes.

New at this year’s festival will be ‘Lost in Cyder Space’, a dedicated cider zone from Sheppy’s cider, who will be launching a new drink. Also taking part are Caple Road, Hogan’s And Italian producer Angioletti with their new blueberry rose infused cider. For those who want to mix things up, Auchentoshan and Don Papa will be serving their special whisky and rum-infused beers respectively. And for friends who prefer alternative tipples, there’ll be a wine bar, Hawkes ginger beer and Harry Brompton’s Ice Tea.

At this year’s CBR London, the token system has been abolished so you can pay with cash and enjoy beers to take away. The Old Truman Brewery will also be the epicentre of London Beer Week (22-28 February 2016) so will play host to pop-up beer bars and immersive beer experiences for guests with a LBW wristband.

Lego art is Awesome! The Art Of The Brick exhibition at Old Truman Brewery

Art Of The Brick features over 75 sculptures, including ‘The Swimmer’, and runs at the Truman Brewery until April 2015

The mask: Three facial sculptures, including a self-portrait of the artist (blue)

Like many, I was a huge fan of Lego growing up. Forget dolls and playing ‘house’, I preferred to build houses, towns and goodness knows what else with Lego bricks. Now I doubt Lego has ever really fallen out of favour with children over the decades, but it certainly seems to be cooler than ever at the moment, following the release of the Lego movie earlier this year.

Following successful showings in New York, Los Angeles, Melbourne, Shanghai and Singapore, artist Nathan Sawaya’s Art Of The Brick exhibition has finally arrived in London. Running at the Old Truman Brewery until January, AOTB features over 75 sculptures made from over 1 million Lego bricks. Although I missed the launch, I went along recently with my sister (a fellow childhood Lego aficionado) to see how humble plastic bricks can be used to create pieces of art.

After watching a short video with an introduction to American artist Sawaya and his inspiration, we then started in the ‘classics’ section of the exhibition, where he had created Lego versions of iconic artwork such as Rodin’s The Thinker, Leonardo Da Vinci’s Mona Lisa and Gustav Klimt’s The Kiss. While it was admirable to see these recreations, we were more interested to see Sawaya’s original pieces. His creations ranged from small to huge, with information boxes detailing his inspiration, the meaning and how many bricks used. It was interesting  to see contrasting size sculptures sometimes having surprisingly close number of bricks involved to make them.

The T-Rex was made using over 80,000 bricks and measures over 6 metres long

Among the recognisable pieces of Sawaya’s work ‘Yellow’, a sculpture of a male torso opening his chest to reveal bricks spilling out. My favourite was ‘The Swimmer’, which was stunningly lit in its own room, featuring only the top half of a swimmer that you would see out of the water. The pièce de résistance was the huge T-Rex, made with 80,000 bricks and measuring over six metres in length.

An exhibition for both adults and children, there is also an Interactive Zone at the end so you can make your own creation. But given Sawaya’s sculptures took over 4,188 hours to make, budding Lego artists may find their options are limited. For those looking for some nostalgia or those with an interest in art made from non-traditional materials, I can recommend checking out Art Of The Brick.

Taking a walk down memory lane at 8 Bit Lane, Spitalfields

In a world before Nintendo Wiis and Virtual Reality, there were the original computer games with pixellated characters. As a child of the ’80s and ’90s, I used to love playing Tetris and Alex Kidd In Miracle World – a far cry from the hyper-realistic, almost human-like characters in today’s computer games. So no doubt, it would have people […]