Le week-end à Paris: Disney, landmarks and laughs in the City of Lights

City of Lights: The Eiffel Tower and the Passerelle Debilly over the Seine

Art Deco: One of Hector Guimard’s entrances to the Metro

Last month, my family and I finally realised a long-discussed plan for a weekend in Paris. We had three goals for the trip – to see the sights of the city, spend a day at Disneyland Paris and take the Eurostar (I had never been on it, unbelievably). We ended up booking a three night break in early December (Friday to Monday) – but only really had two and a bit days in the city so we really had to pack it in. In hindsight, an extra day would have made a huge difference, but Paris is only a short trip from London so I know I’ll be back. We booked a standard Eurostar from St Pancras to Gare du Nord for about £150 return each – very straightforward and easy, with only 30 minutes check-in time – a thrilling concept in comparison to airports (which I can’t stand, despite being a travel junkie because let’s face it, it’s a means to an end).

When it came to accommodation, hotels in the centre of Paris can be expensive. However, having recently stayed at an Air BnB property in Los Angeles, I was keen to do the same in Paris. For those who don’t know, Air BnB has a range of rooms, cottages or full apartments rented out directly from the owner via the website. We rented this lovely 1 and 1/2 bedroom apartment (which sleeps five) in a converted 17th century building in the 1st arrondissement – the heart of Paris. It was located by a station just five minutes on the RER from Gare Du Nord and just a few minutes walk from Pont Neuf, the Louvre and the Pompidou Centre. We were also able to get one straight RER A train direct to Disneyland from where we were staying so it was a perfect location. One thing I do recommend is having change for the tickets machines – a majority of the ones we came across on the Metro didn’t take Euro notes, so we often ended up using our credit cards to get tickets. 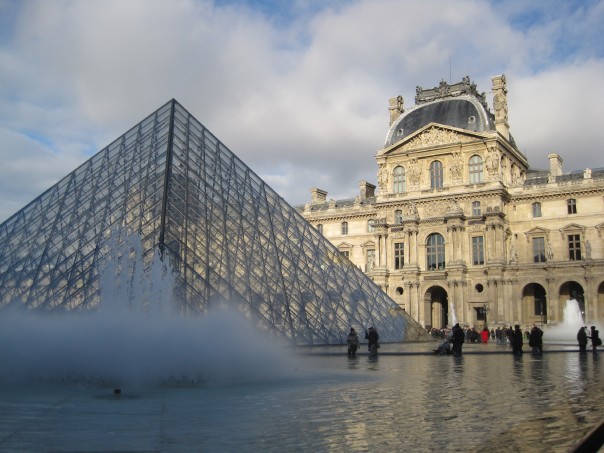 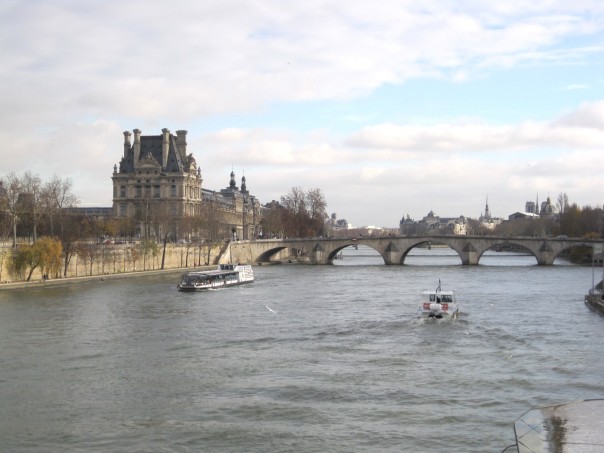 The view looking east down the River Seine near the Tuileries 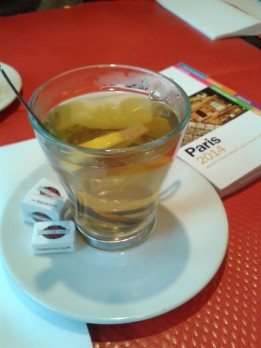 Tipple! A hot cup of rum

Our first night in Paris was essentially a write-off as we had arrived quite late from London. On Saturday morning, I was up early, excited to explore the city. Our first stop, of course, was a boulangerie in the 1st arrondissement for some croissants and chocolate twists for breakfast. Although typically cold for a December weekend, it was mostly sunny for our first day so we spent time just walking around soaking up the sights and atmosphere. After a little detour past the lovely 16th century Church of Saint Eustache, we headed for the Louvre Palais complex – stemming back. While the outside of the Louvre was incredibly busy, the long queue into the Louvre museum – accessing via the Pyramid – was moving fast. As we were short on time in Paris, we opted not to go to the museum this visit, although definitely on my list to do next time. The Louvre complex then opens up to the Tuileries gardens. Originally, the Palais des Tuileries stood on this site, but it was destroyed during the Paris Commune in 1871. Today, the early 19th century Arc de Triomphe du Carrousel stands on the same spot. After going through the arch, we passed through the gardens – home to water features, statues, topiary and flowers – although not so much of the latter were visible in December obviously.

We then crossed the River Seine via the Passerelle Léopold-Sédar-Senghor, a footbridge to the south bank. Like other locations in Paris, the bridge was covered in ‘love padlocks’, with even a vendor selling them should you wish to cement your love in brass for all eternity (I jest!). We then followed the south bank of the River all the way to the Eiffel Tower – one of Paris’s biggest draws. Although impressive during the daytime, I really recommend seeing it at night when it looks stunning all lit up. As well as general tickets to go up the Tower, there are also several restaurants and a cocktail bar up there too if you want to feast in the sky.

END_OF_DOCUMENT_TOKEN_TO_BE_REPLACED

Posted in You can take the girl out of London...

Light up my life: The venue sets the mood with neon-lighting
and luxurious chairs

Le Crazy Horse is a legendary nightspot in Paris, with tourists and locals alike flocking to the nude cabaret. The club was started in 1951 by Alain Bernardin with the premise of deliberating hiring females dancers who are indistinguishable in height and breast size. Following decades of entertaining people in Paris, the club has come to London in a new production, Forever Crazy.

West End impresario Harvey Goldsmith has wisely spotted a gap in the market for some male and female-friendly adult entertainment by opening a pop-up version of the club on London’s Southbank this autumn. While many women wouldn’t feel comfortable in lap-dancing clubs, Crazy Horse is very female-friendly. The dancers are far from the EE-cup, surgically enhanced women we associate with other seedier establishments. They are sexy, classy with plenty of personality. The 10-strong cast have similar svelte figures with an impressive Christian Louboutin collection – prompting both body and shoe envy amongst myself and my fellow female audience members.

Forever Crazy takes place in a temporary venue just opposite the National Theatre. As you walk in, you are instantly transported to the heady nightlife of Paris with the velvet curtains, neon-lighting and framed photos giving a hint of what’s to come. Going through to the bar, you are greeted by chandeliers, chaise longues and cheeky images setting the mood for the luxury and sexiness on its way. The actual stage area is an intimate space – with tables at the front for those able to pay a bit more, with a semi-circle of seating for everyone else. The venue’s size means everyone has a good view of the action. The show has become one of the hottest spots in town with a celebrity clientele. On the night I visited, I spotted Kelly Brook, Thom Evans, Leigh Francis (aka Keith Lemon), Professor Green and Millie Mackintosh in the audience. Just like a cabaret club, you are able to drink a bottle of wine or bubbly while enjoying the entertainment. END_OF_DOCUMENT_TOKEN_TO_BE_REPLACED