A relic of Lambeth industry | The former Royal Doulton building

The former offices of Royal Doulton still stand in Lambeth, although the factory is long gone. 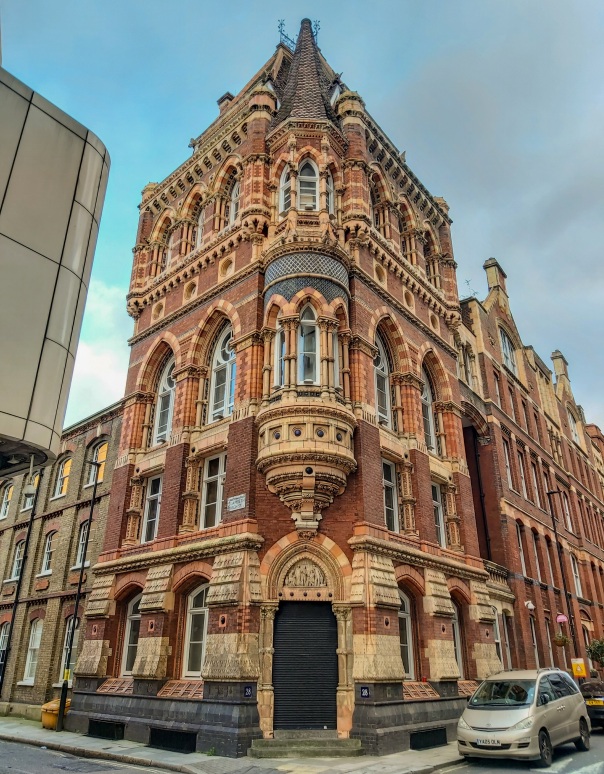 From the 16th century to the mid 20th century, the riverside district of Lambeth was a hub of industry. The old village of Lambeth has existed since at least the 11th century and during the Medieval period was on the outskirts of London. In 1570, two Antwerp potters, Jasper Andries and Jacob Janson settled in Lambeth and started trading. Janson later anglicised his name to Johnson and is believed to be the first maker of what became known as Lambeth Delftware. Many Delft potters followed and settled in Lambeth, as well as Southwark and Vauxhall during the 17th centuries. These small potteries soon helped Lambeth establish its reputation as the centre of the industry, with many springing up on Lambeth High Street – previously known as Back Lane until the late 18th century. The potteries made various designs of earthenware, although pharmaceutical containers and accessories were prevalent. One prominent business was James Stiff & Son’s Pottery, which was established in 1751 and acquired by James in 1840. Located on a two acre site on the High Street, it was one of the largest potteries in London and employed 200 people, had 14 kilns and had its own dock on the River Thames until 1913. Other industries in the area included glassmaking, candlemakers and soap manufacturers.

Turning to the early 19th century, we meet the father of the famous Royal Doulton company, still trading today. Founder John Doulton (1793-1873) started his career as an apprentice to John Dwight’s Fulham Manufacturing Company from 1805-1812. After completing his apprenticeship, he joined widow Martha Jones at her small pottery in Vauxhall Walk. He soon invested his life savings of £100 in the pottery, which traded as Jones, Watts & Doulton from 1815, along with foreman John Watts. After Jones retired in 1820, the pottery continued as Doulton & Watts. The company specialised in salt glaze stoneware, making bottles, jugs and jars. They acquired a large pottery on the High Street in 1826, expanding their business to making glazed sewer pipes. By 1834, they were employing 12 men working across two kilns at 28 Lambeth High Street (see a Lambeth archive sketch of the factory in 1840). Fortunately for Doulton & Watts, demands for glazed pipes rose dramatically in the 1830s-1840s as they were hailed for their safety at the time. 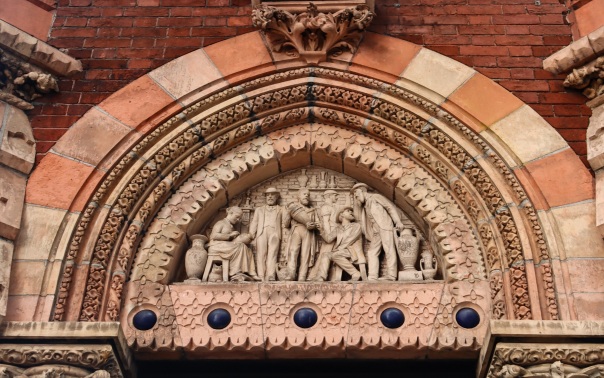 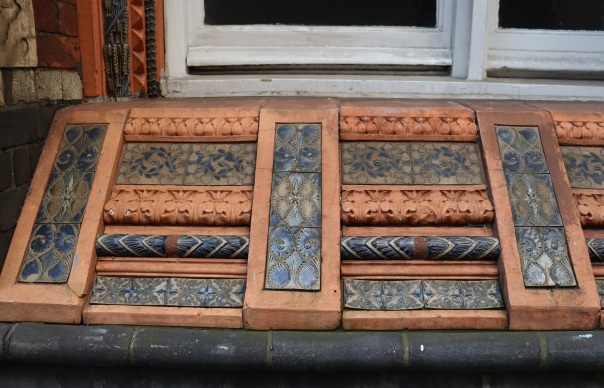 The patterned tiling still survives on the ground floor exterior

In 1835, Doulton took on his son, the future Sir Henry Doulton (1820-1897) as a teenage apprentice. Within 11 years, his son had set up his own independent Lambeth pottery, Henry Doulton & Co, next door at 63 Lambeth High Street. HD & Co established the world’s first stoneware pipe factory. The Victorians were swiftly embracing better sanitary habits and soon the company had become renowned for its sanitation products. In addition to running his own company, Henry continued to assist his father’s business. Both company’s wares were exhibited at the Great Exhibition in the Crystal Palace in Hyde Park in 1851, with both winning prizes. END_OF_DOCUMENT_TOKEN_TO_BE_REPLACED 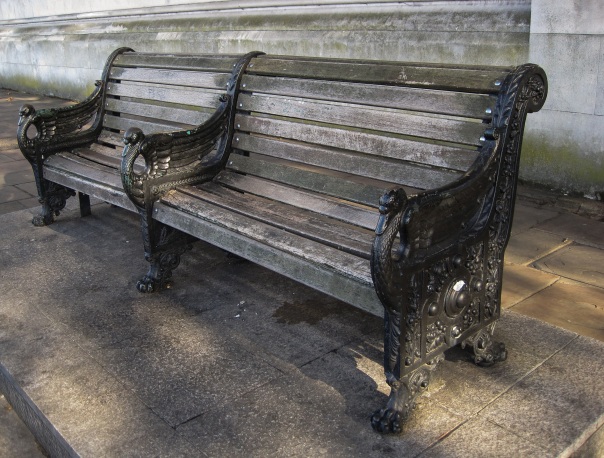 I’ve previously blogged about the creation of the Victoria and Albert Embankments in the 19th century which coincided with the creation of the camel and sphinx benches, the sturgeon lamps and Cleopatra Needle’s sphinxes. However, there is another item of street furniture which appeared around the same time – the swan benches on the Albert Embankment. 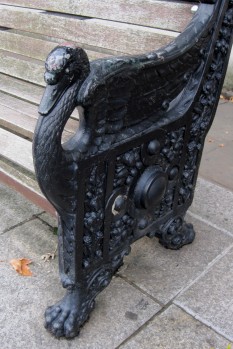 Bringing some grace to the Thames: The benches are often used by patients and visitors to nearby St Thomas’s Hospital

In Victorian London, the rapidly expanding population were creating major issues including the disposal of waste and sewage, most memorably the ‘Great Stink’ in 1858. The local government recognised the infrastructure couldn’t cope with surge of people living and working in the city and established the Metropolitan Board Of Works in 1855. One of board’s biggest projects was the creation of the Victoria and Chelsea Embankments on the north bank of the River Thames and the Albert Embankment on the south. The MBW’s Chief Engineer Sir Joseph Bazelgette (1819–1891) oversaw the extensive project, which involved reclaiming marshland and making the river slimmer in that part of the capital. As well as creating a sewage system and new streets to relieve traffic congestion, a lot of slums on the banks of the river were cleared. In regards to the south bank, the creation of Albert Embankment was also designed to protect low-lying areas of Lambeth from flooding at high tide. The creation of the Victoria Embankment started in 1862, with work commencing on the Albert Embankment in July 1866 and was finished in November 1869. The Chelsea Embankment wasn’t finished until 1874. The embankments were named after the reigning monarch of the time Queen Victoria and her consort Prince Albert, who died in 1861.

In the typically Victorian way, the new Embankment needed to have suitable ‘street furniture’ to give London – heart of the British Empire – a look of prestige and style. George John Vulliamy (1817–1886) was hired as the Superintending Architect. Among one of his many projects in addition to the iconic London ‘dolphin’ lampposts, were creating benches for both sides of the Thames. On the north side, the benches’ panels and arms were designed in the shape of Egyptian sphinxes and camels – complementing Cleopatra’s Needle. On the south side of the river, there aren’t quite as many ornamental benches. However, on the stretch of Albert Embankment between Lambeth and Westminster Bridges are 15 benches featuring cast iron swan panels and arms. These benches were Grade II listed in 1981 and are established within Lambeth’s Conservation Area due to their aesthetic and historical significance. Although I am yet to find official confirmation, I would assume the swan benches have been similarly designed by Vulliamy and made by Z.D. Berry & Son of Regent Street. While the reason behind the Egyptian theme of the Victoria Embankment benches is established, the significance of the swans is not clear. 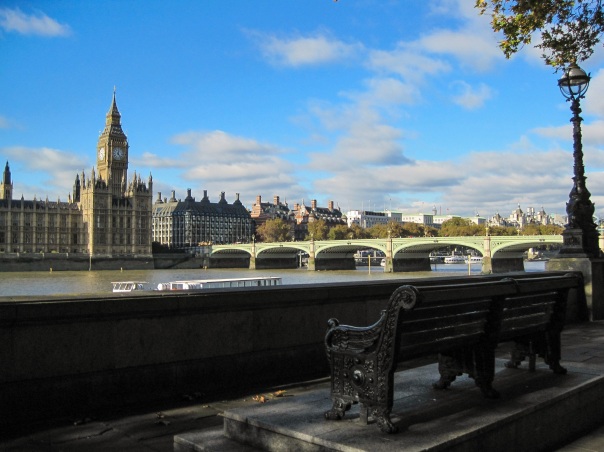 Enjoy the view: Take a seat on the swan benches and gaze across the River Thames at the Houses Of Parliament 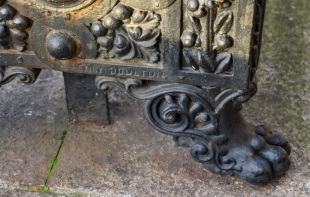 Henry Doulton’s name is on the base of the bench

The name Henry Doulton is stamped on the base on the benches. I admit I couldn’t find a definite answer (but would welcome anyone who knows to comment below), but perhaps Sir Henry (1820-1897) contributed to the funding of the Embankment. Sir Henry was a key player in the expansion of the family ceramics company Royal Doulton, which was founded by his father John (1793-1873). The company had factories on various sites in Lambeth over the years near the Embankment and had to give up some of their land to the MBW for the building of the riverside walk. Sir Henry’s brother Frederick (1824–1872) was a MP for the Liberal Party and a member of the Lambeth Vestry of the Metropolitan Board Of Works from 1855 to 1868. Today, the only remainder of the pottery industry which once stood there is the former Royal Doulton headquarters building on the junction of Black Prince Road and Lambeth High Street, a neo-Gothic building (built 1878) now renamed as Southbank House. Royal Doulton left the Lambeth premises in the 1950s for Stoke-on-Trent.

One possible link to the swans could a tribute to Old Swan Yard, a small yard full of housing off Fore Street – the road which ran along the Thames. Swan Yard and Fore Street were demolished to make way for the Embankment in the 1870s. Whatever the reasoning behind the design of the swan benches, today they stand elevated on a concrete plinth so people can sit and admire the fine view of Big Ben and the Houses of Parliament. Located so near to St Thomas’s Hospital, the stretch of Embankment and benches are popular with hospital patients and visitors.

For Metro Girl’s blog post on the Vulliamy’s camel and sphinx benches on the Victoria Embankment, click here.

Or for more on Vulliamy’s Dolphin lamps, click here.

A Victorian memorial to real-life heroes. 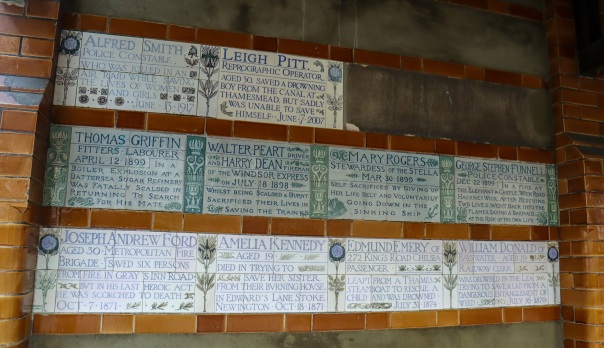 The word ‘hero’ can often be overused, for example as an alternative for describing someone you love or a favourite celebrity. When we come to think of true heroes, this summer we have may used the word (quite rightly) to describe the Olympians and Paralympians who performed feats we could never have dreamed possible. Then of course, there are the staff of the emergency services and Armed Forces, who put their lives on the line for others on a daily basis.

Sadly, not every hero gets the chance to revel in their glory as many have lost their life in the act of trying to save someone. While newspapers can pay tribute for only one day, one Victorian gentleman made sure the heroes in his lifetime were given a lasting, public memorial. 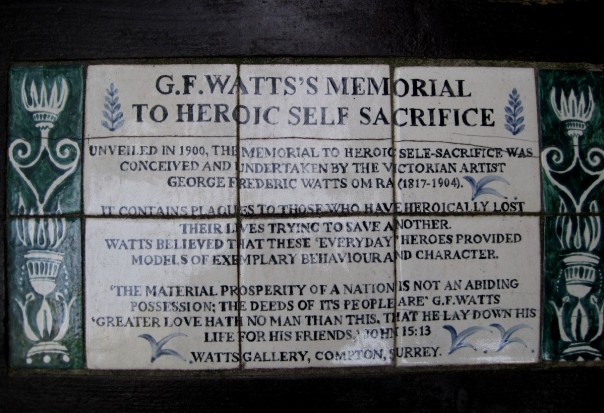 The story behind the monument

Those who work in the City of London may well have passed by Postman’s Park, a quaint park sandwiched in between the modern concrete buildings that stand on King Edward Street and St Martin Le Grand. Although relatively small, it’s actually one of the largest parks in the City of London. Situated just north of St Paul’s tube station, the head office of  the General Post Office (GPO) used to stand nearby, hence the name Postman’s Park. 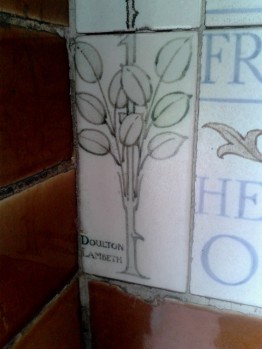 Detail: Doulton Lambeth written subtly in the corner of one tile

The park is essentially the former burial ground for the Grade I-listed St Botolph’s Aldersgate Church (which still stands in the park grounds) and the former Christ Church Greyfriars (which was largely destroyed by bombs in World War II) nearby, with old grave stones lined up against the modern buildings bordering the park. In the North corner of the park stands George Frederic Watts’ Memorial to Heroic Self-Sacrifice – the main reason I come to the park. As I have never worked in the City, I hadn’t heard of the park until I read the Audrey Niffenegger novel Her Fearful Symmetry last year, which featured some of the characters visiting Postman’s Park. I thought it sounded intriguing and was pleased to read it was real when I Googled it. The park also appears in opening sequence of the 2004 film Closer, with Natalie Portman’s character Jane adopting the pseudonym Alice after reading one of the plaques dedicated to one Alice Ayres, who died saving children from a house fire in 1885.

The main draw is a Victorian memorial to people who have died in heroic circumstances. Under a wooden loggia stand rows of ceramic tiles depicting names, dates and details of the tragedies. Victorian painter George Frederic Watts (1817-1904) proposed the idea in 1887 to commemorate Queen Victoria‘s Golden Jubilee, but it wasn’t unveiled until 1900. Although it had place for up to 120 plaques, only four were in place at the opening. When Watts died in 1904, his widow Mary (1849-1938) pledged to continue what her husband started and added more tiles. END_OF_DOCUMENT_TOKEN_TO_BE_REPLACED