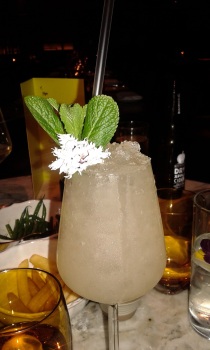 The address 100 Wardour Street has long been associated with Soho life – be it as a restaurant, bar or nightclub. I had visited various establishments on the site over the years, including Floridita and Meza for meals and cocktails. However, in 2016. the venue was reborn as 100 Wardour Street, a dining, drink and live music destination.

The 100 is split across two floors – a lounge area on the ground for more casual drinks and all-day dining, while the grand basement space features the huge restaurant and club. After dropping off our coats in the cloakroom, we wound our way down the grand staircase to the atmospheric basement, with low-lighting and designer furniture. The main focus of the room is the stage, which hosts live music throughout the week.

We were shown to a cosy booth, with room for five of us and space to look out across the expansive room. We kicked off proceedings with an apéritif, as I chose a ‘Respect Your Elder’ (Tanqueray Gin, Elderflower Tonic, garnished with lemon and edible flowers). Our party had opted for the set menu, with four options in each course. To start, I had the Crispy Baby Squid, Fennel Salad and Yuzu Dressing. What I liked about it, is that it wasn’t as greasy as regular calamari and had a lighter feel.

The mains available were mostly traditional British-European offerings, such as Roast Pork Belly, Confit Duck and Rigatoni. However, I settled on the Grilled Scottish Salmon Fillet and Warm Vegetables à la Grec. The salmon was cooked well with a crispy skin (if you like that sort of thing). By salmon standards, it was OK, but could have done with more a bit more flavour. Meanwhile, a few of my table opted for the Confit Duck, served with Braised Escarole, Piquillo Peppers and Olives, which was a universal hit.

To finish, I couldn’t resist the Chocolate and Peanut Butter brownie with Milk Ice Cream. The brownies itself was pretty rich as you can imagine, but the subtle flavour of the ice cream really diffused the sweetness and complemented it well. Meanwhile, I had also been enjoying a saucily named cocktail ‘The Madame’ (Vodka, Lemon Juice, Apple Juice with Mint), which was refreshing with just the right amount of fruitiness.

Overall, we had a great evening. I really liked the venue and atmosphere. The staff was incredibly friendly and attentive. Although my mains was OK, I really enjoyed my starter, dessert and cocktails. I would definitely return. 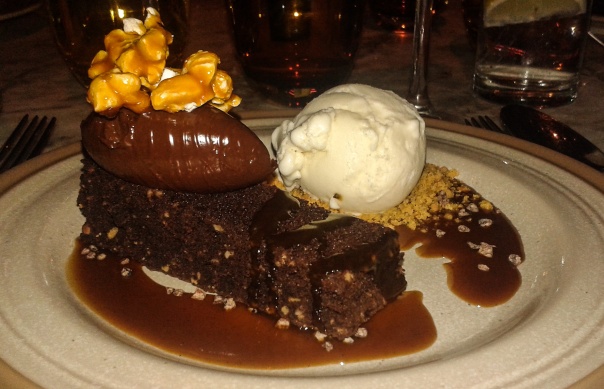