The history behind the Old Finsbury Town Hall. 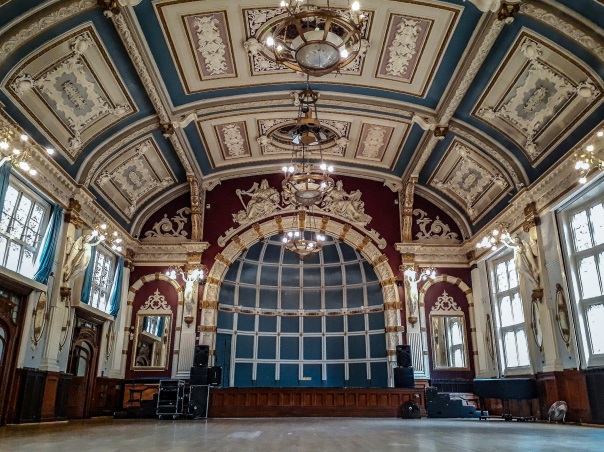 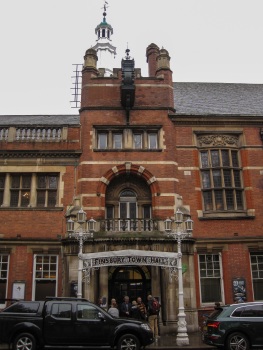 Around the capital, there are many town halls no longer being used for the purpose for which they were originally intended. For example, Bethnal Green Town Hall is now a five-star hotel, Battersea Town Hall has been reborn as the Battersea Arts Centre, while Deptford Town Hall is now part of Goldsmiths University campus. A string of town halls were built in the late 19th century and early 20th century as civic responsibility increased and the population boomed. When the London Metropolitan boroughs were established in 1900, the boundaries of London were considerably smaller than they are today (with most current London boroughs in zones 4-6 excluded).

One Victorian town hall still standing, but no longer in use as a local government building, is Old Finsbury Town Hall in Clerkenwell. Located on Rosebery Avenue, it is built on the site of Clerkenwell Vestry Hall. The Vestry Hall was originally the Spa Fields watch house, which was built in 1813-1814. Designed by the New River Company’s surveyor W.C. Mylne, the watch house was a two-storey building on the junction of Garnault Place and Rosoman Street. The building included two prison cells, a commissioners’ boardroom and a yard for holding stray cattle. It then became a local police station following the founding of the Metropolitan Police in 1829, later becoming a meeting hall in 1856. 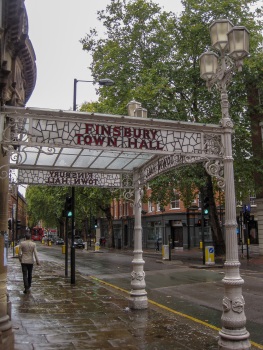 By the late 19th century, the Vestry Hall was much maligned and too small to host local meetings. Finsbury was being redeveloped with slum housing being demolished and the building of a new road named Rosebery Avenue. English architect Sir Aston Webb (1849-1930) – famous for designing the Victoria & Albert Museum and Admiralty Arch – was appointed to judge a competition for designs for replace the Clerkenwell Vestry in 1892-3. A design by rising architect Charles Evans-Vaughan (1857-1900) beat out a dozen or so others, with Charles Dearing of Islington winning the £14,724 13s contract to build it. Evans-Vaughan is also responsible for designing the Bridge House Farm Estate in Brockley, south-east London and the Welsh church in Falmouth Road, Southwark. He was elected a fellow of the Royal Institute of British Architects in 1887, but sadly died in his 40s of typhoid fever just three years later.

The existing Old Finsbury Town Hall you see today was built in two stages. The first part of the building was erected between 1894-1895 and was named Clerkenwell Vestry Hall, adjoining the early 19th century Vestry Hall. It was inaugurated in summer 1895 by Archibald Philip Primrose, 5th Earl of Rosebery (1847-1929). The Earl was Prime Minister at the time of opening and the inspiration for Rosebery Avenue, which was named in tribute to him for being the first chairman of the London County Council (LCC). The new Vestry Hall entrance was on the new Rosebery Avenue and featured the stunning iron and stained glass, art nouveau canopy. The new building was designed in the fashionable ‘contemporary free style’ of the time, with a mix of Flemish Renaissance, Baroque and art nouveau influences. The façade features Red Ibstock brick and Ancaster stone dressing, Portland stone, tiled gabled roofs and a clock and weathervane.

Evans-Vaughan’s designs also covered the striking interior, with spiral staircases, wood panelling and the stunning Great Hall. The latter is a huge, spacious room with curved apse stage area, a barrel-vaulted ceiling with baroque-inspired plasterwork. The highlight (for me and many others) are the ‘Clerkenwell Angels’ – a series of winged female figures holding sprays of foliage with light bulb flowers. Plaster makers Jackson & Co modelled the angels, while Vaughan & Brown manufactured the brass light fittings.

In 1897-9, the building was extended over the original Vestry hall site so it covered the whole triangle block between Garnault Place, Rosoman Street and Rosebery Avenue. Evans-Vaughan was brought back in design the extension, which features another hall, kitchen, offices, storage rooms and another staircase. The extension was built by B.E. Nightingale for a tender of £5,394. The building was renamed Finsbury Town Hall in 1900 when the capital’s local government was reorganised. The Metropolitan Borough of Finsbury was formed of the merged parishes of Clerkenwell, Charterhouse, Glasshouse Yard, St Luke’s and St Sepulchre. Aside from its council meetings, the new town hall also rented out its two large halls to the public for dancers and meetings. From 1899-1908, it was used as the London base for the Church of Jesus Christ of Latter Day Saints. 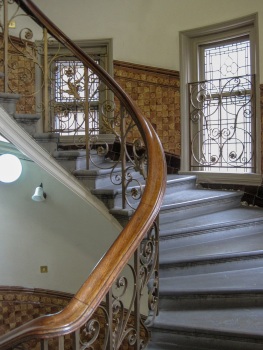 By 1950, the town hall was Grade II* listed by Historic England. Fifteen years later, the town hall’s purpose was altered forever when Finsbury was absorbed into the new London Borough of Islington. The new council’s headquarters became the Islington Town Hall on Upper Street. Although Finsbury was no longer a borough, the old town hall was still used by the council, including Housing District Office and the Area Repair Team. It was also used as a registry office for civil wedding ceremonies until 2003. By the late 1980s, the building wasn’t in a good state and the council stopped hosting functions in the council chamber and large hall due to safety reasons.

In 2005-2006, the municipal offices were restored for use by independent performing arts school, the Urdang Academy, who moved in in January 2007 and still use it today. The venue is also used for wedding ceremonies and receptions, with all profits going to the Urdang Academy.