← British Museum Of Food: A treat for foodies as you explore the history and art of grub
Heddon Street Kitchen review: Ramsay cuisine at affordable prices in a modern, buzzy eaterie →

Guide to London’s landmarks for Suffragette and Suffrage history.

With the current new wave of feminism, women’s rights are rightly a hot topic right now. In early part of the 20th century, London was the focal point of many suffragette demonstrations and protests due to its location as the home of the UK government.

Here’s a guide to London landmarks and monuments from the early 20th century Suffragette movement so you can follow in the footsteps of women who changed British political history.

Bronze sculpture to commemorate the Suffragettes’ campaign for women’s right to vote. The memorial was sculpted by Edwin Russell and unveiled in 1970 with several surviving Suffragettes in attendance. 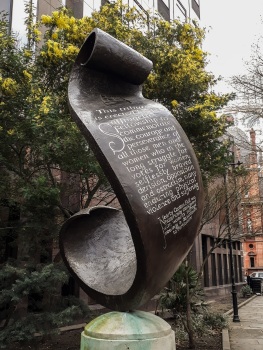 The Suffragette Memorial in Christchurch Gardens

This Georgian townhouse, which is now part of the headquarters for the Royal College of Nursing, was originally home to Henry Herbert Asquith (1852-1928), who was Prime Minister from 1908 to 1916. Asquith was opposed to women’s suffrage and as a result became a frequent target of protests. Some Suffragettes chained to themselves to the iron railings outside his home – which still exist today. Ironic, that his home went on to become a place championing career women in the Royal College of Nursing.

Minnie Lansbury (1889-1922) was a leading Suffragette, having joined the East London Suffragettes in 1915. She was elected alderman on Poplar’s first Labour council in 1919. She died of pneumonia in 1922 after falling ill while spending six weeks in prison for refusing to levy full rates in Poplar. A clock in her memory, originally erected in 1930s and restored in 2008, hangs on Electric House in Bow.

Suffolk-born Millicent Garrett Fawcett (1847-1929) was an important figure in the fight for women’s rights and took a more moderate approach to campaigning. From 1897 until 1919 she was president of the National Union of Women’s Suffrage Societies (NUWSS), with supporters known as suffragists. She lived and died in a house on Gower Street, with a blue plaque unveiled in 1954.

Elizabeth Garrett Anderson (1836-1917) was the first woman to qualify as a physician and surgeon, as well as the first female mayor and magistrate in Britain. Older sister to Millicent, Elizabeth was not as active as her sibling. In 1889 she joined the  Central Committee of the National Society for Women’s Suffrage and only became more active after her husband James George Skelton Anderson died in 1907. While Mayor of Aldeburgh, she spoke out for women’s suffrage, but withdrew from the cause in 1911 when it became more militant. Her daughter Dr Louisa (1873-1943) was imprisoned in Holloway in 1912 for her suffrage activities, including breaking a window by throwing a brick.

Emily Davies (1830-1921) was a prominent campaigner for the women’s suffrage movement and women’s education. She went on to co-found Girton College in Cambridge – the first college to educate women. A blue plaque on her London home was unveiled in 1978.

Manchester-born Emmeline Pankhurst (1858-1928) was one of the figureheads of the Suffrage movement. Although controversial, there are few that can deny her influence during the campaign for women’s votes. A monument to Emmeline was erected in Victoria Gardens by the Houses of Parliament in 1930.

The second of Emmeline’s daughters, Sylvia (1882-1960) was a prominent Communist for a time as well as a Suffragette. She initially worked closely with her mother at the WSPU, before leaving in 1914. She was at odds with her mother and sister Christabel for their support of the war drive during WWI because she was anti-war. A blue plaque unveiled in 1985.

Emmeline lived in Holland Park in from 1916-1919, along with her eldest daughter Christabel (1880-1958). After World War I while living at Clarendon Road, Emmeline adopted four ‘war babies’ born out of wedlock. One of those adopted children, Eveline Bennett, attended the unveiling of a blue plaque on the house in 2006.

Emmeline was buried in Brompton Cemetery following her death in June 1928. Her gravestone, in the shape of a Celtic cross, was sculpted by female artist Julian Phelps Allan, who was born Eva Dorothy Allan.

Emmeline Pankhurst and another 56 Suffragettes were arrested outside Buckingham Palace in May 1914 as she attempted to deliver a petition to King George V. Scenes were pretty violent as the women clashed with the 1,000-strong police cordon.

The Women’s Social and Political Union (WSPU) founded a Women’s Parliament at Caxton Hall (opened in 1883) in 1907, where members would meet at the beginning of each parliamentary session before making a procession to the Houses of Parliament.

Hertha Marks Ayrton (1854-1923) was a prominent physicist, mathematician and inventor. She was awarded the Hughes Medal by the Royal Society in 1906. She joined the WSPU in 1907 and became one of their largest financial supporters. Some Suffragettes, including Emmeline Pankhurst, recovered at her home after going on hunger strikes. 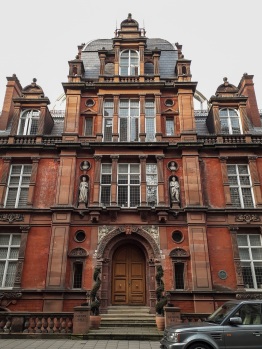 The Women’s Parliament was founded at Caxton Hall in 1907

As the seat of the British government, the House of Parliament was a frequent location for protests and demonstrations by Suffragettes. One notable incident was Black Friday in November 1910, when around 200 women were assaulted as they tried to run past police after finding out the PM Asquith had declined passing a bill for women to have the vote. Inside the Parliament’s St Mary Undercroft chapel, there is a plaque dedicated to Emily Wilding Davison, who hid overnight in a cupboard on the 1911 census night so she could write House of Commons as her address. Two years later, Emily died from her injuries after stepping in front of the King’s horse at the Epsom Derby. Her death on 8 June 1913 made headline news around the world and brought more attention to the Suffragette cause.

Following her death following the incident at the Epsom Derby, Emily Wilding Davison was considered a Martyr to the Suffragettes and was given an elaborate funeral procession. A memorial service was held at the Grade I-listed St George’s church on 14 June 1913, before she was buried at the family plot in Northumberland.

The current Holloway Prison – which is obviously off-limits to the general public – is built on the same site of an earlier building where a majority of London’s Suffragettes were imprisoned, including Emmeline Pankhurst. Many Suffragettes went on hunger strike during their imprisonment to protest about being treated like a criminal instead of a political prisoner. As a result, many prisoners were force-fed, a particularly barbaric treatment. The original Victorian prison was demolished and rebuilt in the 1970s.

Edith Margaret Garrud (1872-1971) was a martial arts expert and Suffragette. She was responsible for teaching the Suffragettes the art of Jujutsu so they could defend themselves from police brutality and arrest. Garrud hosted classes at the Palladium Academy dance school in Argyll Street between 1908-1911. She and her husband William Garrud also ran a dojo (training school) on the Seven Sisters Road. In 2013, her likeness was one of three notable north Londoners (chosen in a public vote) on a sculpture bench outside Finsbury Park station, along with Soul II Soul musician Jazzie B and health pioneer Florence Keen.

The future Suffragette lived in Barnsbury with her uncle Henry Williams as a child. A blue plaque was unveiled on the house in 2012.

A guide to Jane Austen’s London | A walk around ‘town’

← British Museum Of Food: A treat for foodies as you explore the history and art of grub
Heddon Street Kitchen review: Ramsay cuisine at affordable prices in a modern, buzzy eaterie →
%d bloggers like this: