Have you ever spotted a cow’s head sticking out of one of Chelsea’s buildings? Here’s the history behind them…

Today, the London district of Chelsea is famous for its football club, trust fund socialites and designer boutiques. However, until the 19th century, the area was a rural neighbourhood. Chelsea served as a market garden for the rapidly-expanding city, with corn, barley, fruit and vegetables grown on the area’s numerous farms, orchards and gardens. It was particularly known for its root vegetables and was the first place in Britain where lettuce was grown successfully in the mid-to-late 18th century. Meanwhile, the area became fashionable for the wealthy from the 16th and 17th centuries, with its residential districts starting to overtake the farms in the late 19th century. 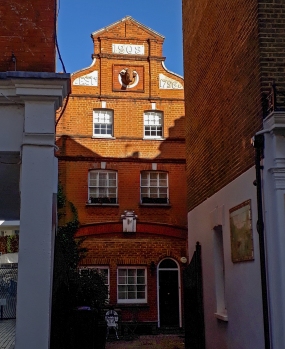 One such farm which held on longer than others was Wright’s Dairy. The dairy was one of the first in Chelsea and was erected on Cook’s Grounds (the site of Glebe’s Place today) in 1796. Around 50 cows and two goats grazed nearby, providing milk for the dairy. In advertorials for their business, they were described as ‘dairy farmers and cowkeepers’. A frequent visitor to the dairy was Scottish philosopher and writer Thomas Carylyle (1795-1881), who lived a few minutes walk away on Cheyne Row. At the time of Carylyle lived in Chelsea, the dairy was run by W. H. Wright, whose late father had founded the business.

The Old Dairy was forced to move slightly west due to rapid redevelopment in the late 1800s, with Cook’s Ground and the nearby kitchen gardens of the Chelsea Rectory being swallowed up by housing. Wright’s Dairy set up their headquarters and a shop at 38-48 Church Street (now Old Church Street). The fields behind the dairy were used for the grazing cows. The street – which runs from the Embankment to the Fulham Road – is one of the oldest recorded streets in the area and dates back to the 16th century. In the late 19th century and early 20th century, business was booming for Wright’s Dairy and it was well-known and respected in the area. Its advertising in 1914 (see here) boasted about being “under constant medical, veterinary and sanitary inspection” and “acknowledged to be the finest and cleanest dairy in Chelsea”. One of their big selling points was stocking “humanised, sterilised and special nursery milk in glass bottles for infants and invalids”. As well as their Old Church Street base, Wright’s also had a shop at 69 King’s Road. Like many dairies of the time, both shops and the headquarters featured cow head sculptures sticking out of the top of the buildings.

As transportation and refrigeration improved in the 20th century, farming was moved outside of the capital, although the dairies remained in London for longer. Wright’s Dairy was eventually bought by United Dairies, which merged with Cow & Gate in 1959 to form Unigate, with the latter selling off most of its dairy business in the late 1970s. Central London dairy buildings were probably abandoned at some point in the 1950s and either demolished or re-purposed.

A 10 minute walk away on the King’s Road, you can still see one of Wright’s Dairy shops at No.69 today. Currently home to a branch of Carphone Warehouse, the four-storey building stands on the corner of the King’s Road and Smith Street. On the top storey of the building, there is one of the cows with a trio of plaques featuring ‘Wrights Dairy’, readable from every angle. The shop’s location on the King’s Road was a great location to have as a business owner and expanded Wright’s customer base (see a sketch of how it was here). Although I couldn’t find when exactly Wright’s ceased trading at the shop, the building was home to the Take Six (see a photo here) clothing boutique in 1969 during King’s Road’s heyday in the Swinging Sixties.

The former dairy shop at No.46 Old Church Street is now a three-bedroom house

Meanwhile, Wright’s Dairy’s main dairy building went on to have a pretty amazing reinvention in the 1960s. At the time, Chelsea was renowned for being a creative, Bohemian hub, with many artists living in the area. Now known as 45a Old Church Street, the courtyard building was leased to two ambitious sound engineers Geoff Frost, 28, and John Wood, 24, to establish their own recording studio. Frost and Wood chose the building because they thought the slate lined walls (from its dairy past) would be good for sound-proofing. At the time, the ground floor had a cobbled floor and looked like a garage with a pottery leasing part of the floor. It had a gentle slope, used to drain the water when the cows were hosed down. The sloping later proved a useful tool to the studio to create its special sound.

Frost and Wood had barely any money, but managed to get a loan from Barclay’s bank and enlisted the help of cheaper Polish builders to transform the dairy into a studio. They managed to get permission from the freeholders to remove part of the second floor to give them the big space they believed would transform the sound. A live studio, control room and office were built over the first and second floors. They added some double glazing and left the dairy’s original lath-and-plaster ceiling. Sound Techniques Ltd opened in December 1964 and their first client was TV and film soundtrack composer Philip Green (1911-1982). Word of the amazing sound from the studios soon started to spread and some of the biggest artists of the 1960s and 1970s booked recording time there. Among the acts to record at Sound Techniques Ltd included Sir Elton John, The Who, Jethro Tull, Judy Collins, Tyrannosaurus Rex and John Cale. Pink Floyd recorded several tracks from their debut album in 1967, including Arnold Layne, Interstellar Overdrive and See Emily Play. Singer/songwriter Nick Drake recorded his debut album, Five Leaves Left, in 1968 – six years before his death of an overdose, aged just 26.

Original tiling from the former shop at No.46

After 10 years of music making, Sound Techniques was forced to close in 1974 when the lease ran out. Unfortunately, Frost and Wood couldn’t afford the freehold asking price of £120,000. Olympic Sound Studios bought the freehold and continued to use the studios until the early 1980s. Today, No. 45a – the Old Dairy headquarters – has been converted into a three-bedroom townhouse. It was bought and restored by designer Bill Broadbent in 1997. Speaking to the Daily Telegraph in 2012, Broadbent said: “The place was a wreck when I bought it, but I love restoring period properties and I have had a lot of fun with this one.” There are conflicting reports about how old the building is, with 18th century and early 19th century touted as possibilities. The building features one of the cow heads, with the year 1908 and est. 1792, at the top, although the 20th century date could refer to a restoration.

Meanwhile, the remaining buildings and dairy shop on Old Church Street have also been converted into housing. After the dairy shop moved out, No.46 became a tobacconist’s shop, and a cake shop in subsequent decades. Today, the old shop is a three-bedroom house with roof terrace, which went on the market for £2.1million in 2012. Standing outside it today, you can still see the original tiling from the dairy shop era on the ground floor façade.

Read about the history of the milkmaids and cows of, St James’s and Green Parks.

Posted on 14 Nov 2018, in Architecture, History, London and tagged Chelsea, Kings Road. Bookmark the permalink. Comments Off on The Chelsea cows | The story behind Wright’s Dairy and its surprising musical legacy.