The Georgian terrace has a plaque claiming to be the former home of Sir Christopher Wren… but what’s the truth?

Cardinal’s Wharf, aka No.49 Bankside, is a rare survivor of 18th century architecture in the area

Cardinal’s Wharf isn’t usually on a tourist’s checklist of things to see in London. However, inevitably a large proportion of visitors will pass by it while on the way to the Globe or Tate Modern and be attracted to the row of 18th century terraced houses juxtaposed by 20th century architecture. Standing out amongst the three buildings is the tallest – No. 49 Bankside – a three-storey cream building with red door. If you get close enough, you’ll find a cream, ceramic plaque linking it to a very important Englishman – Sir Christopher Wren (1632-1723). Renowned as the architect of St Paul’s Cathedral, the Royal Naval College in Greenwich and many of the City of London’s churches, Wren is an important name in the history of the capital. The plaque claims: ‘Here lived Sir Christopher Wren during the building of St Paul’s Cathedral. Here also, in 1502, Catherine Infanta of Castile and Aragon, afterwards first queen of Henry VIII, took shelter on her first landing in London.’ 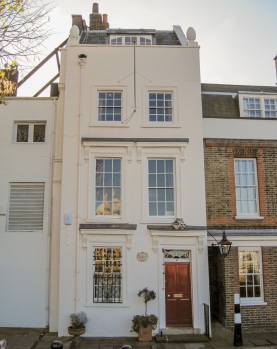 If you stand with your back to the building, you have a lovely view of St Paul’s over the Thames. It’s easy to imagine Wren retiring with a glass of something to the first floor in the evening after a long day at work and gazing out of the window surveying the progress… however, sadly it’s not quite what happened. Wren was tasked with rebuilding a lot of the City of London after the Great Fire in 1666 and is believed to have based himself at Bankside… but at a building a few doors down from No.49, which has long been demolished.

Writer and historian Gillian Tindall uncovered the truth behind the myth of the building in her 2006 book The House By The Thames: And The People Who Lived There. It turns out No.49 was actually built in 1710 – the same year St Paul’s Cathedral was completed, so that already debunks the theory Wren was based there during the decades it took to build his masterpiece. Tindall believes the plaque stood on the actual house that Wren did live in, but a few houses east – situated where a modern block of flats stands today behind the Founders Arms pub. Her theory suggests Malcolm Munthe (1910-1995), who owned the property in 1945, retrieved the plaque when the original Wren building was demolished and placed it on No.49 to protect it from demolition (for a photo of No.49 in 1946, click here). While the act may have led many to confuse fact and fiction, the plaque’s incorrect placing has managed to save the house from destruction. Bankside was heavily bombed during World War II, before there was mass demolition and redevelopment in the 1960s and 1970s, so the continued existence of these three houses in Cardinal’s Wharf is a remarkable thing. According to Nicky Haslam’s 2009 memoirs ‘Redeeming Features’, antiques dealer and ‘King of Chelsea’, Christopher Gibbs (1938-2018) lived at No.49 at some point in the 1960s. Situated next to the 1940s-built Tate Modern (formerly Bankside Power Station) and the modern reconstruction of The Globe theatre (opened 1997), Cardinal’s Wharf is a striking contrast to the modernity around it. The house used to stand a lot closer to the Thames, until the Greater London Council revised the waterline back in the 1970s, creating a larger pedestrianised area we see today. No.49 remains the oldest house on Bankside today. 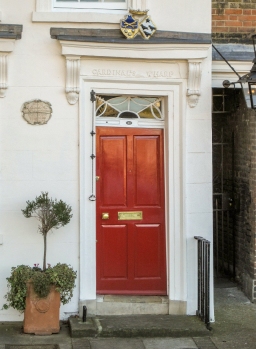 Who lived in a house like this? Coal merchants, boarders, a Hollywood actress and director and squatters have called No.49 home

It is believed the name Cardinal’s Wharf comes from the Cardinal Wolsey (1473-1530), who was the Bishop of Winchester in 1529 and would have stayed at the nearby Winchester Palace when in London. While the house wasn’t lived in by the great Wren, it did serve as a home for coal merchants, an office, a boarding house, a squat during the 1970s and a private home once again. One previous resident was the late Hollywood actress Anna Lee (1913-2004) and her film director husband Robert Stevenson (1905-1986) – director of classic Disney films Mary Poppins and Bedknobs And Broomsticks -, who lived there in the 1930s before being drawn to the bright lights of Tinseltown. The house and railings outside were Grade II listed by Historic England in 1950.

Prior to being built in the early 18th century, the site was home to the Cardinal’s Hat pub – which was also reported to be a brothel – and mentioned by the diarist Samuel Pepys. Until the Civil War, Bankside was London’s Soho of the day, known for its entertainment and dens of iniquity. It’s highly likely a certain William Shakespeare may have popped in to the Cardinal’s Hat for an ale in between performances at The Rose or the original Globe, which stood around the junction of Park Street and Porter Street, on the east side of Southwark Bridge. He actually referenced the pub in Henry VI Part II. Shakespeare’s contemporary and founder of Dulwich College, the Elizabethan actor Edward Alleyn was also recorded to have dined at the pub. Today, the name of the pub lives on in Cardinal Cap Alley (the street sign on the west side of No.49), an alley which actually dates back to around 1360. 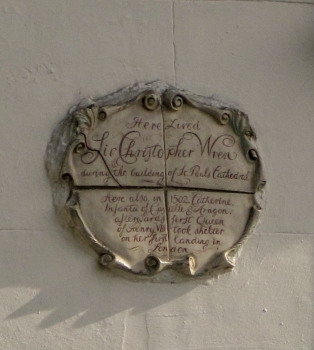 The plaque isn’t quite accurate

Next door, the red brick No.51 Bankside dates back to 1712 and has long ties to Southwark Cathedral. It was named as Provost’s Lodging in the 20th century, with the future Bishop of Salisbury, George Reindorp living there after the war-damaged No.50 and No.51 were purchased from Bankside power station in 1957 (who had owned them for 20 years) and knocked together. Due to its location, Bankside was not an appealing place to live in the 1960s and 1970s due to the constant humming noise from the power station. The late Dean of Southwark, Rev. Colin Slee, lived at the property in the early 21st century until his death, while No.52 was a residence for the Cathedral’s director of music. No. 51 was put up for sale for £6million by Savills in 2011. (For a photo of No.51 Bankside taken in 1940, click here).  Meanwhile, on the east side of No.49 stood the house of Elizabethan theatre entrepreneur Philip Henslowe (1550-1616), who built The Rose theatre in 1587 – the first playhouse in Bankside – a three-minute walk away in Park Street. In the early 1800s, Henslowe’s house was home to the senior chaplain of St Saviour’s Church (now Southwark Cathedral, which only received cathedral status in 1905). Today the site of Henslowe’s house is the entrance to the Globe exhibition. Henslowe is buried in Southwark Cathedral. 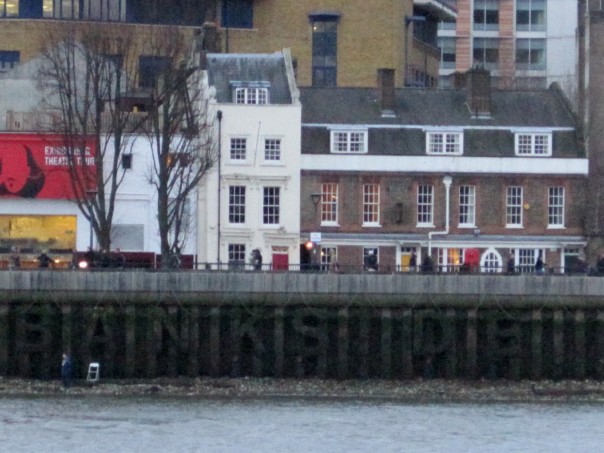 Hold fire! The story behind the cannon bollard on Bankside

← Christmas comes to Oxford Street: Gallery of decorations and lights
Bounce review: A perfect social package of cocktails, pizza and Ping Pong →
×
%d bloggers like this: