Heritage campaigner and poet has been immortalised at St Pancras International.

Whatever your taste in architecture, few would deny the St Pancras station and hotel is one of London’s finest buildings. After decades of neglect, the station was given a huge facelift in the Noughties, with the former Midland Grand Hotel reborn as the St Pancras Renaissance Hotel. Every year, over 28 million passengers pass through the Victorian Gothic architectural masterpiece.

However, while today we appreciate architecture from yesteryear, it wasn’t always the case. In fact, St Pancras nearly followed the fate of nearby Euston, whose famous Doric arch was demolished in 1961. One of the heritage campaigners who fought to save the Euston Arch was English poet, writer and broadcaster, Sir John Betjeman (1906-1984). Betjeman was a founding member of the Victorian Society, which was established in 1957 to fight to preserve 19th and early 20th century architecture, which had fallen out of favour at the time.

St Pancras station and the Midland Grand Hotel were built in 1868 to a design by acclaimed architect Sir George Gilbert Scott (1811-1878). Originally a luxurious hotel, as technologies advanced, it lost its popularity and was closed in the 1930s. British Rail then moved into the former hotel – then known as St Pancras Chambers – and its bedrooms became offices. By the 1960s, British Rail made several attempts to close and demolish the hotel. However, Betjeman and his colleague Jane Hughes Fawcett (1921-2016) at the Victorian Society led a ferocious campaign to save the Victorian wonder.

At the time, Betjeman wrote: ‘What (the Londoner) sees in his mind’s eye is that cluster of towers and pinnacles seen from Pentonville Hill and outlined against a foggy sunset, and the great arc of Barlow’s train shed gaping to devour incoming engines, and the sudden burst of exuberant Gothic of the hotel seen from gloomy Judd Street.’ Fortunately, Betjeman, Fawcett and the Victorian Society’s campaign was a success and St Pancras was saved. It was protected forever in 1967 when it was given Grade I listing.

When St Pancras International re-opened in 2007, the late Betjeman was commemorated with a bronze sculpture of his likeness. The 6ft 7in statue by artist Martin Jennings shows the former Poet Laureate holding on to his hat as he gazes up at the Barlow roof. Explaining the piece at the time, Jennings said: ‘The piece is an image of him as if he has walked into the station for the first time and gazes up at the roof. He’s got a bag with his books and his coat is billowing up behind him as if in the wind of a passing express train.’ Under his feet is a disc of Cumbrian slate with lines from his poem Cornish Cliffs: ‘And in the shadowless unclouded glare. Deep blue above us fades to whiteness where. A misty sea-line meets the wash of air.’ 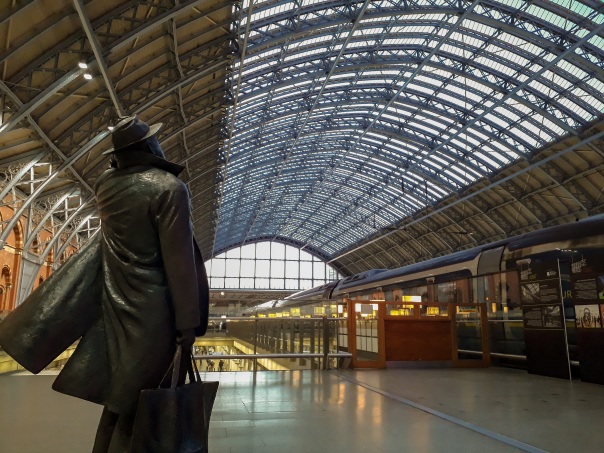 ← Balthazar review: Brunching French-American style at this upmarket brasserie
Expand your knowledge of wine at Humble Grape’s Wine Dinners →
%d bloggers like this: