The fascinating history of Blackfriars | Norman castles, a priory, theatres and Shakespeare’s home

Remains believed to be of the Blackfriars Priory in Ireland Yard

Blackfriars is an area by the southern fringes of the City of London, familiar to many City workers. Now dominated by office blocks, the district used to be a hub for religion and entertainment. Until the early 13th century, the area was home to Norman fortresses Mountfiquet Castle and the original Baynard’s Castle. Mountfiquet was likely named after the Baron of Mountfichet (of the Stansted Mountfichets in Essex), while Baynard’s was built by Ralph Baynard (a sheriff of Essex). Both castles were demolished by King John (1166-1216) in 1213 after their then-residents Robert Montfichet and Robert Fitzwalter took part in the barons’ revolt against the monarchy the previous year.

The name Blackfriars dates back to the 13th century when Dominican Friars established a priory on the site. The Friars first came to the capital in 1221 and established their first London monastery on the outskirts of the City near Lincoln’s Inn at Holborn. However, in 1276 they obtained permission from King Edward I (1239-1307) to move to the area we now know as Blackfriars. The King approved the levelling of the remains of Mountfiquet and Baynard Castle and the demolishing and rebuilding of the Roman City walls to incorporate their priory in 1282. The plot covered around 8 acres and incorporated the main church, a tower and five chapels (the Virgin chapel, a Lady chapel, St John the Baptist chapel, a pardon chapel and the Chapel of St Ann). The name Blackfriars started being used around 1317 to describe the Friars, who were recognised by their black cappas. The City also included Grey Friars (Franciscan), Austin Friars, Crutched Friars, White Friars (Carmelites), and the Holy Trinity and St Helens Priory priories. In 1322, the Blackfriars was the scene of tragedy when a large number of impoverished Londoners were crushed to death in a rush to beg for food and money at the gates. 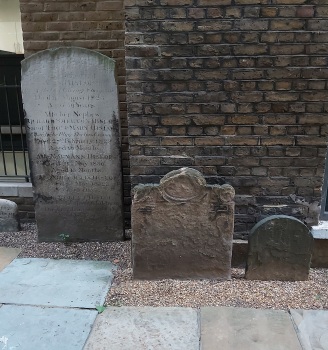 Some of the gravestones of St Ann Blackfriars

The Black Friars were popular with royals and the priory was used for important occasions, including meetings of parliament and the Privy Council as well as state visits. For example, Charles V of the Holy Roman Empire and I of Spain (1500-1558) visited the Priory in 1522. The priory’s Parliament Hall (Legatine Court) was the location for the infamous divorce hearing between King Henry VIII (1491-1547) and Catherine of Aragon (1485-1536) in 1529. The Tudor monarch succeeded in having their marriage annulled so he could marry Anne Boleyn and set up England’s independent religion in the process, cutting off ties from the Catholic church in The Vatican.

Of course, Henry VIII’s religious overhaul led to the dissolution of the monasteries, with Catholic land across the country ransacked for the royal treasury. Blackfriars Priory was closed in 1538 after 260 years of worship, with the land and buildings sold off.

One part of the priory managed to survive as a religious building. What had been the Dominican Chapel of St Ann in the Priory became St Ann Blackfriars Church, established to serve the locals who had resided within the precincts of the former monastery. The rebuilt church was consecrated on 11 December 1597 and expanded in 1613, but was destroyed in the Great Fire of London in September 1666. When the City was rebuilt, St Ann’s parish was united with St Andrew-by-the-Wardrobe, although the church site – and its existing burial ground – were both retained for burials. Both graveyards were declared full in 1849 and exist today as public gardens. A small gated garden in Ireland Yard features many graveyards dating back to the 18th and 19th century, as well as some Medieval-looking rubble. The fragment of wall may have belonged to St Ann Blackfriars, but Historic England believe it is likely to be remains of the Dominican Priory. It was Grade II listed in 1940.

Apothecaries Hall has been in Blackfriars since the 17th century

Another part of priory land was bought by Elizabethan politician Sir William More (1520-1600) in 1559, who leased the land to composer Richard Farrant (then-Master of Windsor Chapel) in 1576 to host plays. The theatre was said to be small, around 46ft by 25ft. After Farrant died in 1580, the lease was taken over by William Hunnis (d.1597) and John Newman. The theatre was sub-leased to several people, and after messy legal disputes, More eventually voided the original lease and reclaimed his land in 1584. The second Blackfriars Theatre was established by theatre impresarios James and Richard Burbage in 1596. James Burbage bought the frater of the former Blackfriars Priory for £600 and established a covered playhouse where Londoners could be entertained all year round. The open-air Globe was located on the opposite side of the River Thames at Bankside, but could only be used during good weather, so the Blackfriars Playhouse was more user-friendly. However, local residents were not happy about the ‘sinful’ theatrics and Burbage’s company of actors were forbidden from performing. Initially, the theatre hosts performances by young male choristers, but eventually adult actors took to the stage, with plays by Jacobean playwrights Ben Jonson and Thomas Middleton performed. By 1608, Burbage’s company, the King’s Men moved into the theatre, with a certain William Shakespeare (1564-1616) as one of the sharers. After the theatre was renovated, the curtain rose in 1609 for performances. The Blackfriars Theatre is believed to have attracted a more upper class audience than the rougher theatres in Shoreditch and Bankside and brought in double the takings of the Globe. The theatre was closed down during the Civil War in 1642-51 and demolished in August 1655. Although the theatre is long gone, its history is commemorated with its site being named ‘Playhouse Yard’.

Working so locally, The Bard ended up buying a home – the old priory gatehouse – in the area in 1612, which he left to his eldest daughter Susanna Hall (1583-1649) in his will. Although a blue plaque commemorates his Blackfriars home on No.5 St Andrew’s Hill, some historians argue it was more likely to have been the site of the Cockpit pub further downhill.

Along with churches and theatres moving into the Blackfriars site, a livery company named the Society of Apothecaries acquired the priory guesthouse, Cobham Hall, in 1632 as their new base. It was destroyed during the Great Fire, but the Society rebuilt and its 17th century Apothecaries Hall still exists on Black Friars Lane today. However, there are still some Medieval remains of the Priory to be found within the Hall. It is open to visitors during Open House London.

Although the priory is long gone, the name Blackfriars lives on with a train and tube station, a road bridge, a street name and a popular pub. The Black Friar is a Grade II listed pub on Queen Victoria Street. Originally built in 1875, it was remodelled in 1905 in the arts and crafts style by architect Herbert Fuller-Clark (1869-1934). Sculptors Frederick T. Callcott (1854-1923) and Henry Poole (1873-1928) worked on a lot of the internal decoration. There were plans to demolish the building during post-war redevelopment in the 1960s, but the pub was saved by a campaign led by heritage campaigner Sir John Betjeman and Lady Dartmouth.

Austin Friars | The history of one of London’s lost monasteries

← Afternoon Tea @ Plate review: A twist on an old favourite on an educational foodie journey
Frieze Sculpture 2019: Step into Regent’s Park outdoor gallery of contemporary art →
%d bloggers like this: