← Can lampposts be fashionable? The myth of the Coco Chanel street lights
A Liebster Award Nomination →

Seen a Dolphin in the Thames? Story behind the lamps on the Embankment

The history of the sturgeon lamps by the River Thames. 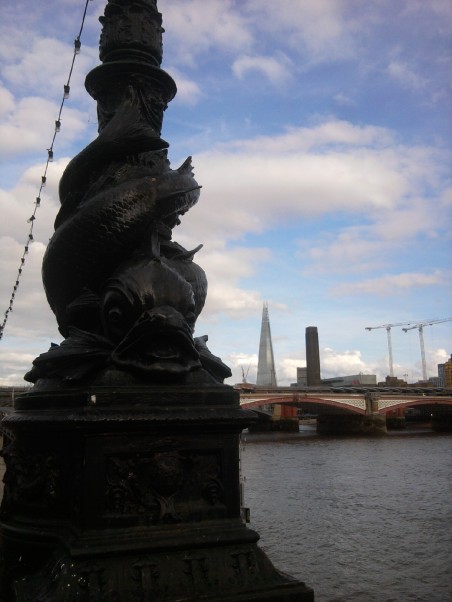 Lining the Thames: One of George Vulliamy’s ‘dolphin lamps’ on
the Victoria Embankment 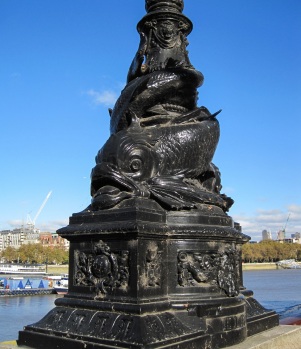 Spreading south: Replicas of Vulliamy’s lamps popped up on the Southbank to commemorate the Queen’s Silver Jubilee in 1977

Many capital cities around the world have a river running through them. However, when it comes to the Thames, one thing that makes it so recognisable is the striking Victorian lamps lining the Embankment. The street lighting in question are called the ‘Dolphin lamps’, but appear to be sturgeon fish.

Prior to Victorian times, the Thames was a lot wider in the centre of town, but was slimmed down by the building of the Victoria Embankment on the north side in the late 19th century. Civil engineer Sir Joseph Bazelgette (1819-1891) came up with a scheme to reclaim some 22 acres of marshland and built a new road and sewage system for the rapidly expanding capital. While this transformed the city, it also meant many riverside buildings were demolished, such as York House. Building of the Victoria and Chelsea Embankment meant Londoners had somewhere new to stroll beside the river so of course, some attractive new street lighting would be required.

The original lamps were made by Masefield & Co

Step forward George John Vulliamy, (1817-1886) the Superintending Architect of the Metropolitan Board of Works, who created the unique riverside lamps built into the retaining river wall in 1870. Many different designs were submitted, including one by Bazelgette, however Vulliamy’s designs were chosen for the centre of town. The cast-iron lamps featured two sturgeons with their bodies wrapped around the lamp column. Facing the Embankment, the face of Neptune peered out with the year 1870 inscribed underneath him. Vulliamy was said to have been inspired by the dolphin sculptures on the Fontana del Nettuno in Rome’s Piazza del Popolo during his extensive travels around Europe. As well as the lamps, Vulliamy also designed the pedestals and sphinxes for Cleopatra’s Needle – the ancient Egyptian obelisk gifted to London by Egypt in 1819 – and the sphinx and camel benches to complement it along the Victoria Embankment. The 1870 lamps were bronzed by Masefield & Co Founders of Chelsea, with its company name visible on the base of some lamps.

For the rest of the 19th century, these lamps only stood on the Victoria Embankment and part of the Albert Embankment (in between Westminster Bridge and Lambeth Bridge). However, further were added in 1910, 1933 and 1964. In 1977, city authorities created replicas on the rest of Albert Embankment on the South Bank to commemorate the Queen’s Silver Jubilee. Instead of the year underneath Neptune on the Victoria Embankment, ‘EIIR’ was inscribed to mark Queen Elizabeth II.

Fish face: Despite being described as dolphin lamps, they appear to be sturgeon

Iconic: The lamps lit up on a stunning September evening

Can lampposts be fashionable? The myth of the Coco Chanel street lights

Having a gas | The last Webb Patent Sewer lamp in London

← Can lampposts be fashionable? The myth of the Coco Chanel street lights
A Liebster Award Nomination →
×
<span>%d</span> bloggers like this: