← Kings, hills and prisons | The story behind Ludgate in the City of London
Artistry, education and tragedy | The Pugin home on Great Russell Street →

Learn about the history of one of Westminster’s prisons and its only visible remains. 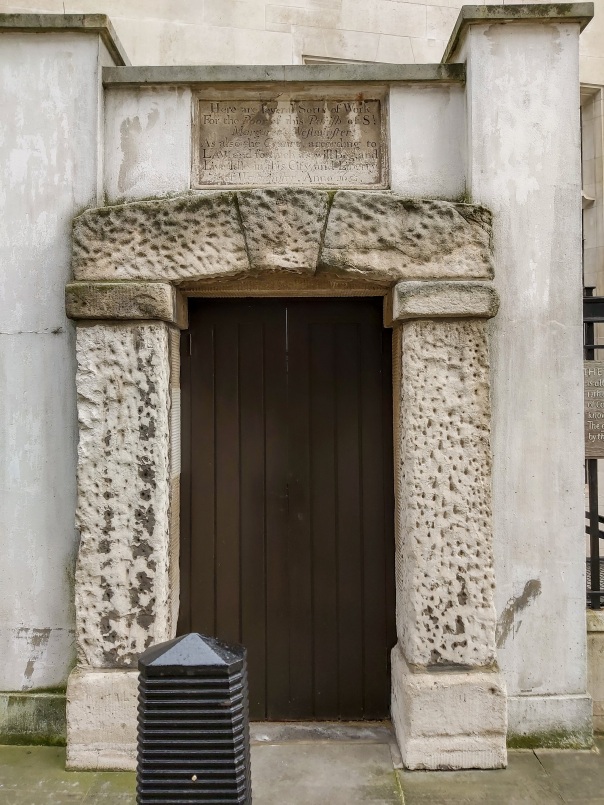 Today, London prisons are few and far between. While today, prisons tend to be extensive and house large populations of prisoners, in previous centuries, houses of punishment were quite different in more ways than one.

In past centuries, Westminster only had a couple of prisons in comparison to many in the City of London. There was the substantial Millbank Prison (on the site of the Tate Britain) and Tothill Fields Bridewell. During its over two century history, the latter was known by various names, including Westminster House of Correction (Tothill Fields), Westminster Bridewell, Westminster Prison or Westminster County Gaol.

The location was Tothill Fields, a marshy section of land in between Westminster Abbey and Millbank. When it first opened, it was originally named Bridewell after Bridewell Palace and Prison in the City. Formerly a royal residence, the original Bridewell (on the current site of New Bridge Street near Blackfriars) became a prison, hospital and workrooms in the 16th century. When the Westminster prison first opened in 1618, it was deigned as ‘house of correction’ for paupers. It was relatively small and was built near the site of the House of Fraser store on Victoria Street. It was enlarged in 1655 as its population grew. During Queen Anne’s (1665-1714) reign in the early 18th century, Bridewell started to incarcerate criminals.

The 17th century prison was demolished in 1836, two years after a new prison opened. The new larger prison was built on an eight-acre site near Vauxhall Bridge Road. Designed by English architect Robert Abraham (1773-1850) at a cost of £186,000, the new prison was in the shape of an ace of clubs. This was inspired by social reformer Jeremy Bentham’s (1748-1832) Panopticon design, which meant guards could keep an eye on a large body of prisoners from a central point. Each ‘leaf’ featured a separate cell block, which collectively held 900 inmates. The centre of the leaves included a courtyard, with exercise yards located between each cell block. The main entrance was located on Francis Street. Aside from the main prison buildings, there was also a chapel and governor’s house within the complex (see the original ground floor plan of the new prison). When the new prison opened, it had one block for untried male prisoners and debtors, one of male convicted criminals and the last of female convicts. Inmates were put to work, usually oakum picking (here’s an image of women picking oakum in 1906), carpentry, mending clothes and the exhausting treadmill. Among the noted prisoners were Scottish soldier and trickster Gregor MacGregor (1776-1845), tea broker and schizophrenic James Tilly Matthews (1770-1815), and revolutionary war veteran and artist John Trumbull (1756-1843). 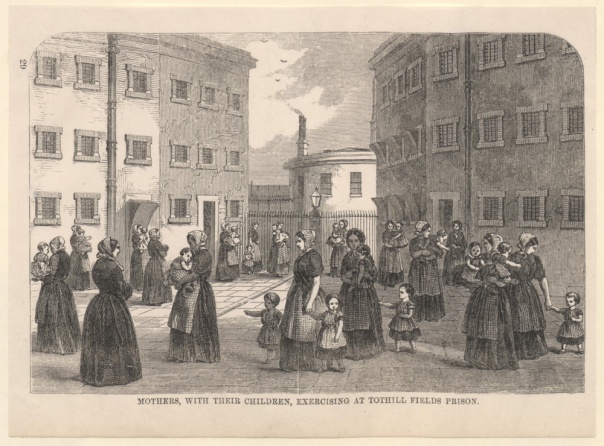 Female prisoners exercising with their children at Tothill Fields Bridewell in the 1860s.
(Engraving by John Johnson)

The prison’s population changed in 1850 to only women and boys aged under 17. One cell block housed boys, while the other two were for the women. While incarcerated, prisoners could expect to be woken up by gunfire and live on a basic diet of gruel, bread and water. Some impoverished boys had deliberately committed crimes to get inside Bridewell, because at least they would have a bed and three meals a day. However, the youthful population didn’t last long and it became a single sex prison by 1861 when the boys were transferred to Cold Bath Fields in Clerkenwell. The women’s prison was eventually closed altogether in 1877, with the inmates sent to Millbank Prison. The cells were demolished in 1885, with the foundations being reused during the building of Westminster Cathedral in 1895. Today, the site of the boys’ cell is underneath the Cathedral, Clergy House and Choir School, while the rest of Bridewell lies under Ambrosden Avenue, Ashley Gardens and Thirleby Road.

The old door is just metres away from Westminster Abbey

Although both the 17th and 19th century Bridewell prisons are long gone, one small part of the former is still in existence today. A stone 17th century gateway was preserved and was resited at the back of the Middlesex Guildhall on Little Sanctuary by the Greater London Council in 1969. Above the gate is an old stone plaque, which reads:

“Here are several Sorts of Work for the Poor of this Parish of St Margaret’s Westminster. As also the County, according to law. and for such as will beg and live idle in this City and Liberty of Westminster, Anno 1655.”

Funnily enough, the name Bridewell became known as an alternative name for jails over the years. It wasn’t only the Tothill Fields one that took its name from the original in the City of London. There were other Bridewells in the London district of Clerkenwell, as well as further afield in Dublin and Cork, Ireland; and Chicago and New York, USA.

← Kings, hills and prisons | The story behind Ludgate in the City of London
Artistry, education and tragedy | The Pugin home on Great Russell Street →